Sustainable, beautiful, educational, and properly managing rainwater events. These are some of the elements that go into artful stormwater management design — or artful rainwater design, as the co-authors of “Artful Rainwater Design” would prefer it be called. 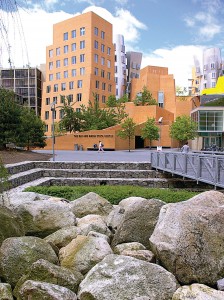 The Outwash Basin, located outside The Ray and Maria Stata Center at the Massachusetts Institute of Technology, reduces pollutant loads in rainwater and downstream damage from runoff while safely moving, controlling and containing rainwater, even capturing it for reuse. (Photo by Stuart Echols and Eliza Pennypacker)

“It’s not enough to be sustainable,” Pennypacker said. “It needs to celebrate rain so people can see what rain does — to shift the perception from rain as a waste product to a resource.”

From rain gardens, bioswales, bumpouts and stormwater plants to permeable pavement and other consciously ecologic choices, municipalities have a wide gamut of stormwater options from which to choose. However, while putting in such features, both Pennypacker and Echols encouraged getting the most bang for a city’s buck by incorporating artful rainwater design and reaching beyond the hydrologic value.

As an example he brought up the situation of a municipality that put in a bioswale between a sidewalk and road, to gather rainwater from both, and filter and slow it down. Rather than stopping there though, he said, due to its visibility, landscaping could be added, “allowing people to see the rain water flow, watering plants, doing beneficial things. Later, people will say, ‘Wow, that’s really beautiful. I want that in my neighborhood.’”

“They see the benefit, the value added to property — all the while it’s managing rain and shifting public perception.” Pennypacker added.

Currently, institutions like schools and universities are leading the charge on green infrastructure. Municipalities, on the other hand, tend to require the “stick and carrot” approach.

Echols said municipalities don’t look for information on green infrastructure until they run into a stick, often in the form of an EPA mandate. However, when they do, there are numerous manuals, case studies and other resources available, including funds for maintaining artful rainwater features.

Philadelphia, Pa., launched major green infrastructure projects after receiving stormwater penalties. Through its Green City, Clean Waters program, it used artful rainwater design to create landscapes that enhance the visual appeal of the city, create recreational opportunities and utilize rainwater as a resource — all while reducing the amount of it entering the combined sewer system.

Maplewood, in particular, has been using “carrots” to ramp up community involvement in its green infrastructure projects: namely, by providing incentives for homeowners to build rain gardens.

“Almost every development project requires landscaping,” Pennypacker said. “Why not make it (green infrastructure) a required feature? They function as a workhorse while adding value and changing public perception.”

Throughout the process, don’t discount the power of an individual with a goal.

Maintaining green infrastructure features also needs to be on the table when a project is formulated.

“That is their Achilles heel,” Echols said. Municipalities don’t want their green infrastructure to become an eyesore, or for the project to be remembered as “That ugly thing. You want to design it in such a way that people will love and care for it.”

Lynchburg, Va., is another example, with its landscaped medians. Echols noted they’re beautifully landscaped and maintained.

“They have signs up of who placed them and maintains them. Nice things like that should be able to be applied anywhere.”

While sticks and carrots might force the implementation of green infrastructure projects, both Pennypacker and Echols noted more and more communities are embracing the designs. However, they echo words of wisdom to municipalities before they tackle such projects.

“First, projects have to succeed or there won’t be a second. They won’t try again,” Pennypacker said. She added such projects can also be a great promotion for a town or city, showing it actively “wants to make a great downtown.”

Echols recommended taking a page from Portland’s book, with its Siskiyou stormwater bump-out project: Make the first project small and nonthreatening, something easily removed if it doesn’t work out. Portland’s project came in at approximately $25,000 and was well-liked by the neighborhood.

“Do something small and see if you get approval. If not, ignore it,” he said. He also noted every project gets its complaints, particularly one that takes up parking. “Do it at a corner where no one wants to park anyway.”

“Don’t put in measly plants and wait three years for them to mature,” Echols further advised. While natives are popular for such projects, he added, “I would suggest some ornamentals. Make it look good. Use river stone not crushed gravel. Crushed gravel is ugly.” River stones, on the other hand, are pleasant looking and tie back into what artful rainwater design is all about: the water.

Returning to maintenance, Echols said, “Have a maintenance schedule in place that explains what needs done. Have the plants on a grid so people know what’s supposed to be there. With rich soils, everything that is blown in the air will want to germinate.”

When in doubt, look at other municipalities and see what’s worked. “There’s no need to reinvent the wheel though innovation is great.”

Finally, “Try and make it fun,” Pennypacker encouraged. “Take the plunge and do it — get your feet wet. The Siskiyou stormwater bump-out cost $25,000 and it ended up beautifying the neighborhood and slowing down traffic by narrowing a portion of the road.”