Punxsutawney Phil is held aloft and presented to the crowd by handler John Griffiths just before Punxsutawney’s annual Groundhog Day prediction. Phil is placed on the stump at the left side of the photo, where he will either see his shadow or not. (Photo provided)

“Weather Capital of the World” may sound a bit presumptuous for a town of fewer than 6,000 residents. But judging from the swarm of visitors who descend on Punxsutawney, Pa., every Groundhog Day and the weather-related attractions spawned from the town’s popularity, the moniker may be appropriate after all.

Every Feb. 2 since 1887, Punxsutawney Phil, the famed four-legged prognosticator, emerges from his burrow and predicts either the early onset of spring or a six-week prolongation of winter.

The theory, of course, is that if Phil sees his shadow — an eventuality that has occurred on more than 100 of the groundhog’s 129 forecasts — six more weeks of winter will ensue. Surprisingly, the critter has “proven” the theory with an 80 percent accuracy.

Groundhog Day derives from the millenniumold Christian celebration of Candlemas, also on Feb. 2. The counterintuitive weather forecast brought to America by European settlers was the same, as noted in the ancient Scottish poem: “If Candlemas Day be fair and bright Winter will have another fight. If Candlemas Day brings cloud and rain, Winter will not come again.”

Upwards of 25,000 visitors have swarmed Punxsutawney for the annual event that actually occurs at Gobbler’s Knob, a small hollow on a wooded hilltop a couple miles outside of town. Crowds dwindled significantly in the 1970s but surged after the 1993 release of Bill Murray’s comedy movie “Groundhog Day,” even though the movie was filmed more than 500 miles away in Woodstock, Ill.

Devotees of the annual daybreak ritual stand in line at the burrow all night. At 3 a.m. a bonfi re is built to warm them somewhat.

The Pennsylvania Tourism Bureau estimates the tourists yield as much as $5 million to the local economy. Th e 2,600 hotel rooms in Jeff erson County and its contiguous counties are booked solid. Some Punxsutawney restaurants enjoy quintuple their normal business.

Phil’s famed yearly appearance belies his continuous presence in Punxsutawney in the form of several dozen bronze, plywood and fiberglass likenesses dotting the town. The real Phil lives in the “Groundhog Zoo,” an oversized terrarium built into the outside wall of the library on the town square, so passersby can view the famous critter.

The town has seized upon his popularity to entice visitors year-round. 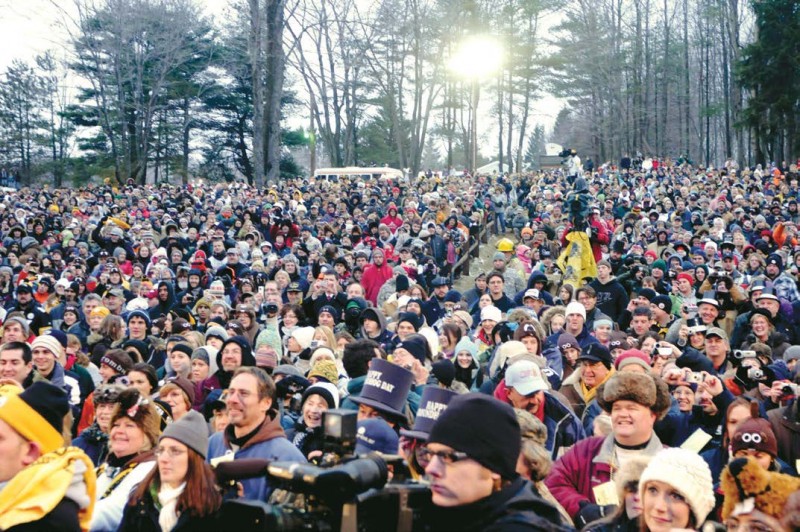 A crowd gathers at Gobbler’s Knob in Punxsutawney, Pa., awaiting the annual prediction of when winter will end. Below, three revelers sport unique headwear for the event that gave Punxsutawney its claim to fame. Some devotees have attended every year for decades. (Photos provided)

The Weather Discovery Center opened downtown in 2001 in the former post office and is promoted as “a place where the science and folklore of weather collide.” Targeted especially toward children, the interactive museum includes tornado and lightning simulators, a “weather lore” section featuring a jar of forecasting leeches, a space shuttle thermometer and a green screen where visitors can play weather forecasters on camera. Visitors can also create their own thunderstorm, watch movies in the Catastrophic Theater and learn about the science behind extreme weather.

As the lifespan of a groundhog in captivity ranges from nine to 14 years, many rodents have filled the role of the iconic critter.

But don’t tell that to the Punxsutawney Groundhog Club, which insists: “There has been only one Punxsutawney Phil. Punxsutawney Phil gets his longevity from drinking ‘groundhog punch’ (a secret recipe). One sip, which is administered every summer at the Groundhog Picnic, gives him seven more years of life.”

The club further assures: “Punxsutawney Phil’s forecasts are not made in advance by the Inner Circle (the cadre of top-hatted gentlemen who administrate the annual tradition and are charged with Phil’s care throughout the year). After Phil emerges from his burrow … he speaks to the Groundhog Club President in Groundhogese. His proclamation is then translated for the world.”