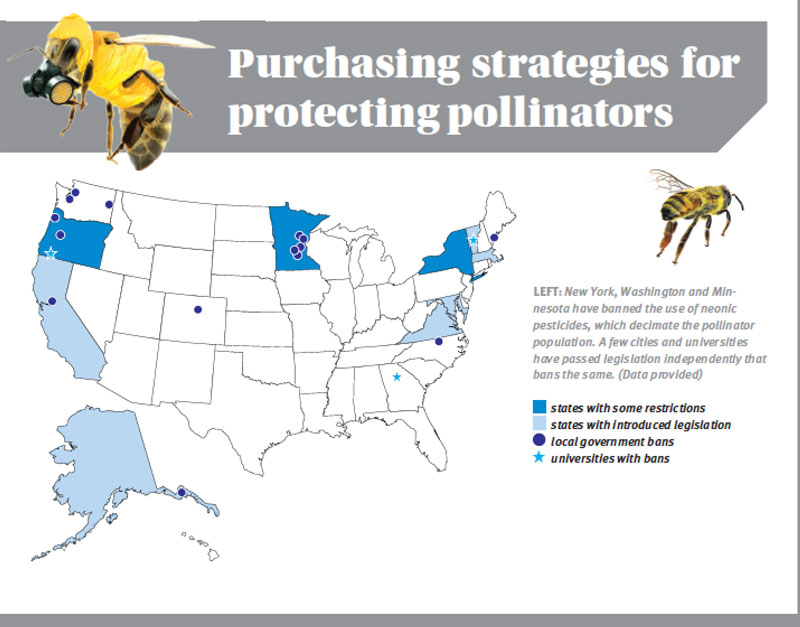 New York, Washington and Minnesota have banned the use of neonic pesticides, which decimate the pollinator population. A few cities and universities have passed legislation independently that bans the same. (Data provided)

Bees and other pollinators play an integral role in the world’s food supply. According to Tiff any Finck-Haynes, Food Futures campaigner for Friends of the Earth and a seventh-generation organic family farmer, honeybees contribute to a third of the food humans consume. They are essential to the food system and agricultural economies, contributing more than $15 billion to the U.S. economy and $270 billion to the rest of the world.

Unfortunately, bees are dying at alarming rates. In the last eight years, beekeepers have lost an average of 30 percent of their hives, with some losing all of their hives and many leaving the industry entirely.

Multiple factors are contributing to this phenomenon:

Neonicotinoid, or neonic, pesticides are currently identified as the leading cause of deterioration within the pollinator population. The most widely used class of insecticides in the world, neonics can be found in approximately 140 of the most basic food crops, including corn, soy, wheat and canola.

While Finck-Haynes acknowledged that pollinators are not attracted to every affected crop, the chemically treated plant seeds pollute the soil, groundwater and surrounding fauna. Neonics have been proven to be 5,000–10,000 times more toxic than DDT and can pollute the ecosystem for months or even years. They are classified as systemic insecticides whose toxins move throughout and infect an entire plant, including the pollen and nectar, making this method of pest control harmful not only to bees, but also to other organisms that are beneficial to both agriculture and the environment.

A Newcastle University study recently confirmed the hazards of treating flowering crops with neonics and concluded that reducing use may be the only certain way to halt bee and pollinator decline. Last spring a group of Swedish scientists also found evidence that bees may actually be addicted to these toxic chemicals. 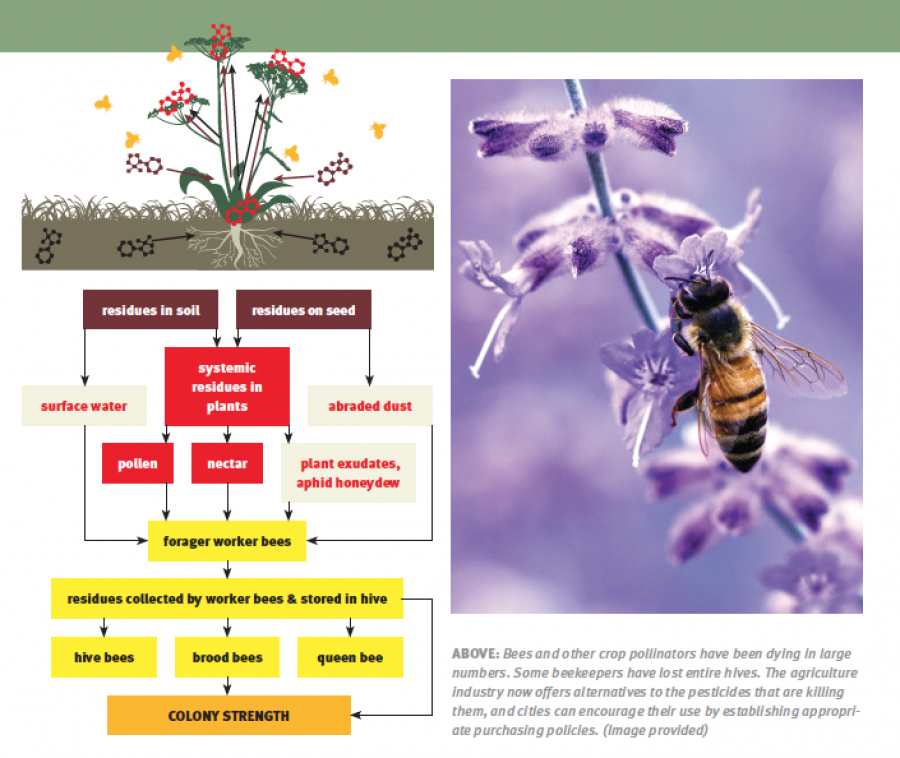 In response to a mounting body of scientific evidence, Finck-Haynes reported that federal agencies; state governments; local, regional and tribal governments; school districts, colleges and universities; nonprofits; businesses; investment advisors; wholesale nurseries; and landscapers are currently taking an interest in pollinator protection strategies, policies and in what they can do to contribute to the conservation movement.

• In June 2014, President Obama issued a memorandum directing federal agencies to establish a task force to develop a strategy to protect pollinators. It focused on planting of millions of acres of federal land with pollinator-friendly plants and conducting more research on honeybee and monarch population decline.

• The Home Depot, Lowe’s, Whole Foods Market and BJs Wholesale Club have taken steps to eliminate the use of these pesticides in products they sell.

• Th e U.S. Fish & Wildlife Service announced it would phase out the use of neonics by 2016.

• The Council on Environmental Quality released an ordinance in October recommending federal facilities and lands refrain from using neonics or purchasing from nurseries still treating plants with the insecticide.

• Minnesota, New York and Oregon have placed restrictions on the use of neonics while Alaska, California, Massachusetts, Maryland, Vermont and Virginia are in the works. Local government bans can be found in the states of Colorado, North Carolina and Washington. 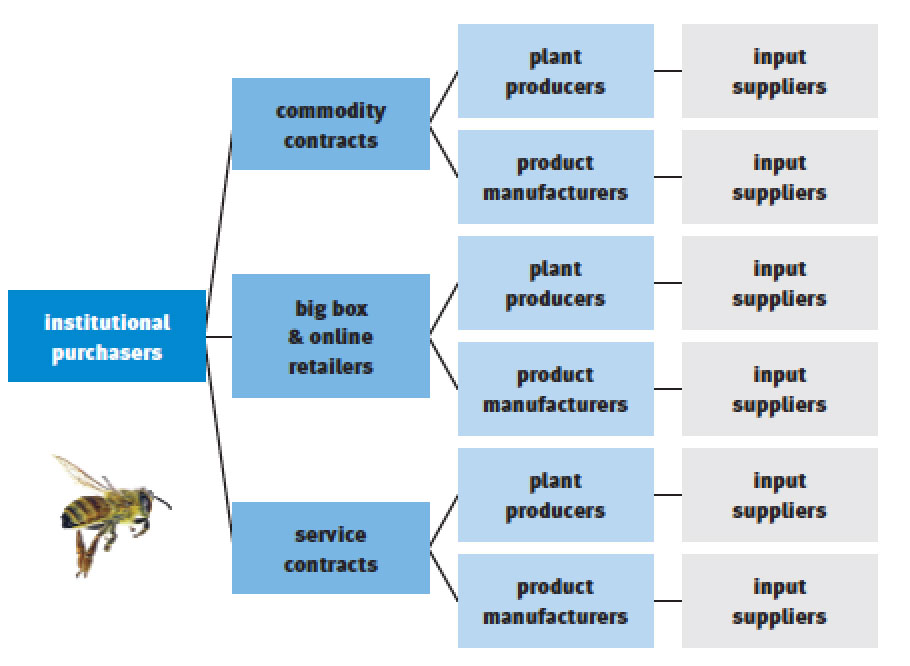 As this chart demonstrates, municipalities and other institutional purchasers can have an impact via service contracts on the type of pesticide used on the ingredients that constitute the products it uses. Which ones are you willing to buy? (Image provided)

Dr. Chris Geiger, entomologist and manager of the San Francisco green purchasing program, defi nes IPM as a decision-making process for managing an ecosystem that minimizes the harm from both pests and pesticides. Th e process involves identifying and learning about each pest and preventing its destruction via biological methods: removing its food, blocking its points of entry and using chemical controls only as a last resort.

THE RESPONSIBLE PURCHASING NETWORK An international organization based in Oakland, Calif., RPN is committed to sustainable purchasing and assisting government agencies, educational institutions and businesses in following its example. RPN o ers a wide variety of tools and resources to help its members, including providing purchasing guides and model speci cations, and developing contracts and policies.

FRIENDS OF THE EARTH With a presence in 74 countries worldwide, Friends of the Earth is the largest federation of grassroots environmental groups. Its mission is to defend the environment and champion a healthy and just world.