With winter in full swing, you’re probably kicking yourself for not requisitioning that third new truck and plow package last fall. Who knew you’d get this much snow? 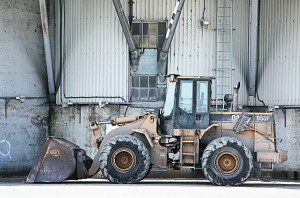 If your second backhoe isn’t being used right now, equipment sharing sites, such as Equipment- Share and MuniRent, can turn it into a source of income. (Photo provided by MuniRent)

Neighboring cities are also short on equipment to keep streets clear during repeated winter weather onslaughts. But wait! Your “neighbor” two towns over has a great new truck: Maybe he’d let you rent or even borrow his? That way you won’t have to lay out big bucks to buy one yourself, not to mention the gas and oil to feed it.

That neighbor also owns some new heavy gear, including a skid loader, forklift and vibratory roller. Take him to lunch and consider asking if you can rent the piece you need now or in the spring since your administrator won’t approve the machines, tools and use of an operator for a one-time job, anyway.

Smart municipalities have hit on this sensible idea when undertaking big construction or agriculture projects, or repairing infrastructure such as bridges, buildings, roadwork and parks. According to Alan Mond, CEO and co-creator of MuniRent in Ann Arbor, Mich., and Oakland, Calif., equipment-sharing is definitely gaining traction but is not new; rather, it is something that always existed in the municipal space.

“As an example, Mutual Aid Agreements allowed municipalities to collaborate in disaster situations,” he said, adding that government, in general, has a long history of collaboration.

“The advent of the Internet provides the ability to streamline how a loader or a dump truck is scheduled. It also helps to have an intergovernmental agreement and keep track of sharing to show residents that cities are stretching taxpayer dollars as much as possible. The reduction in cost is incredible, and it requires negligible time investment to implement.”

Sharing heavy equipment reduces costs, increases utilization and improves efficiency. Also, a knowledgeable operator of the machines is a great extra — especially, for example, if your town needs a roller for its new parking lot but no one knows how to operate one. Opt for a driver along with the machine, and presto! One big headache relieved instantly.

Mond stressed that his company is neither an equipment rental company nor a motor pool service, but a capital equipment-sharing venture. Similar initiatives are rapidly making their way across the country. 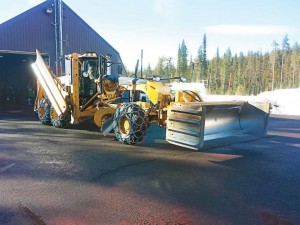 Even snowplowing and deicing equipment can be rented or loaned between nearby cities that may experience different winter storm conditions due to the vagrancies of lake effect and the mini-climatalogical patterns of mountain regions. (Photo provided by MuniRent)

One is Missouri-based www.EquipmentShare. com, a peer-to-peer endeavor that gives back to its community by providing a platform where contractors can save and make money on equipment rental. EquipmentShare.com also helps nonprofits like Habitat for Humanity rent equipment for much lower rates and actively screens members that apply to rent quality equipment and experience. The company also reserves the right to remove members that don’t adhere to its policies and conditions.

“Any public entity can benefit from sharing programs, whether it be heavy equipment or even employee sharing,” he said. “Equipment sharing is a common practice among Ohio’s local governments, and we urge all public entities to consider it as we work more to do more with less.”

Mond expanded on the point.

“Large cities should consider sharing assets internally between departments. In large organizations it is easy to lose track of how many pieces of equipment are available at all times. An internal sharing program provides the ability to increase utilization of equipment,” he said, adding that this was different than a motor pool. “An equipment-sharing program means that assigned equipment stays with the department in the same location, but it is made available for other departments to request a reservation.

Smaller municipalities can group together and formalize an equipment- sharing program, he noted.

The agenda is to assist both localities and keep costs down. If one town has a backhoe it is not currently using, another city might be able to use it for a specific job. A sewer-camera truck, for example, costs a minimum of $200,000 when purchased new; renting one from another municipality provides rent money to the loaner and saves the renter thousands of dollars.

Yost said much of the equipment shared in Ohio relates to special projects and takes the form of mowers, concrete saws and sewer cameras. “However, choosing to borrow any type of equipment your entity does not own, instead of purchasing new, can help save money,” said Yost. Does the sharing equipment need to be formal? If so, what should the contract include?

“It definitely needs to be formal,” said Mond. “I’ve posted a blog on our website that outlines what the intergovernmental sharing agreement should include.”

Briefly, the five points are:

“I’ve got a 4-pound sledge hammer in my toolbox,” said Yost. “Most of the time I don’t use it, but when I do, it’s the only tool for the job. So if my neighbor needs a sledge, does it make more sense for him to buy another one, or to borrow the one I have but I’m not using? “It’s the same thing with expensive backhoes, graders, bulldozers and the like that most governments own — and that’s why we launched ShareOhio.gov.”