Year-round, first responders make an impact in their communities — both on and off the clock. The majority of those in the field want to make lasting, positive contributions to the community they’ve signed up to serve and protect.

While last year held some bad press, extraordinary kernels of good deeds popped through, too, fully exhibiting the heart of the first-responder community. These are just two of the departments that took on the mantle of Santa’s helpers. They encompass the good tidings shared by many.

Toys In place of tickets 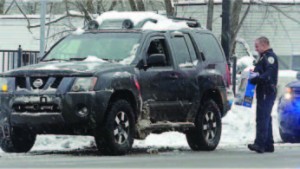 Packages were driven from a local Meijer to the traffic stop, with Rob Bliss bringing them to the officer involved to give to pulled over motorists. Motorist were picked by Police Chief Steven Bukala, who was on the look out for minor equipment violations.

The Lowell, Mich., Police Department’s “toys instead of tickets” operation spiraled into viral fame, amounting to “the craziest time of our lives” for officers of the city of almost 4,000 residents.

“It was started by UP TV and RobBlissCreative.com,” Police Chief Steven Bukala said. “Rob is a former Grand Rapids resident but has adopted Lowell as his hometown. They approached us last fall with this crazy idea.”

That idea? Handing out Christmas gifts during traffic stops. Bukala recalled one of the first things he asked was how they planned to pull it off. Also, while ironing out the details, he said, “I was adamant that they had to be legit traffic stops.”

It was decided the operation would target minor traffic violations like dangling objects, overly tinted windows, headlights that were out — largely equipment violations drivers are often unaware of and the department doesn’t usually take the time to pursue. From there, the local Meijer supermarket was brought on board. Located 2 miles from where the stops would occur, the store served as the base for obtaining gifts. 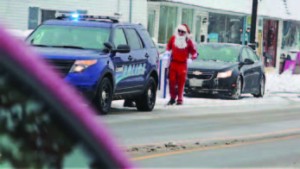 Officer Scott VanSolkema was tasked with not only giving gifts but also extracting what people wanted for Christmas, which at first was not an easy task. However, once he succeeded, a team at Meijer would grab the gifts and rush them to the traffic stop — to the surprise and delight of the motorists. (Photos credit: Rob Bliss Creative)

“We had a traffic spotter — me — and an officer (Scott VanSolkema) who pulled them over and got to give them the presents,” Bukala said. “Camera crews were hidden amongst the stores and pedestrians. They had smaller cameras, not like the ones used by news crews.” While the Lowell department uses body cameras, VanSolkema’s was switched out for a high-def camera and a microphone.

During the stops the officer tried to pull information from the drivers — namely, what they wanted for Christmas. The task proved difficult at first. “We were 0 for 5 for the first few (stops). But once we got that first one, it was a domino effect.”

When the crew at Meijer heard the Christmas wish on the radio, they’d run to retrieve the item and race through a checkout lane dedicated for the operation. As Rob Bliss drove, wrappers quickly put holiday paper on the presents.

Once on the scene, the present was given to the officer to give to the driver.

“I estimate it was a 15-minute window from start to finish,” Bukala said, noting anything past that would have been too long.

While there were several happy drivers, Bukala said, “Generally, locally, we got a lot of heat.” Since the operation occurred in the business district, “Businesses were afraid we were driving away customers.” Calls even made it to city hall.

However, after the operation, which occurred on a Wednesday and Thursday, Bukala said, “First thing Friday I approached businesses and told them what we were doing. Some of them responded with ‘Wow! How did you keep it a secret?’”

After the operation wrapped up, the video went live and was picked up by social media and news agencies across the world.

“We had 35 million hits in the first week,” he said. “I believe we’re at 100 million hits presently. It’s been surreal and humbling. Because of the amount of attention we received, we could not keep up with all the praises and responses. The week after it was released is a big blur for us.

“We get calls from other police departments, asking how we pulled it off. I’ve been encouraging them to do it — by all means, top us.” Bukala stated his officers, not just Van-Solkema, walked away seeing “it’s better to give than receive. They saw the joy and excitement on everyone’s face, and just the sense of the Christmas spirit.”

The department has nothing special planned for this December, noting something like they did in 2014 would only happen if they got another sponsor. Besides, Bukala said, they wouldn’t want to do it every year or people would start to expect it. 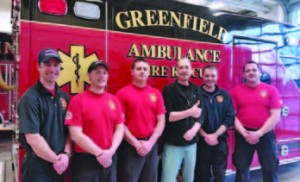 Greenfield, Wis., firefighters
and paramedics were pleasantly surprised when the gentleman they took to the hospital with a cardiac emergency walked into their station one day. The man and his wife now plan to help the department with its hands-only CPR initiative. (Photo provided)

“I dare say it was the culmination of four years of encouraging them to do the right thing,” Greenfield, Wis., Fire Chief Jon Cohn said. He explained “Do the Right Thing” has been the department’s informal campaign ever since a crash that tragically ended the life a 4-yearold girl. “We made it our mission.”

Cohn became chief of the department in 2011. He and his men and women kept the momentum going even as faces within the department changed, eventually allowing that mission to supersede an overly policyladen approach. All those efforts led up to the department’s moment of viral fame last Super Bowl Sunday.

Recalling that day, Cohn said a heavy, wet snow was falling. An older gentleman went out to shovel his drive, started to not feel well and went inside. His wife found him in a state of cardiac emergency: With the help of dispatch, she completed hands-only CPR until paramedics arrived and took him to the hospital, where he was placed on advance life support.

That might have been where the call ended. Realizing the driveway still needed plowed and shoveled, however, a group of firefighters and paramedics asked for permission to go back.

“I was watching the Super Bowl when one of our battalion chiefs sent me the photo,” Cohn said, noting the firefighters and paramedics understood the family was going through a hard time. 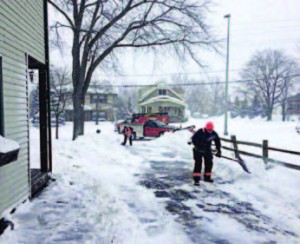 Greenfield, firefighters and paramedics returning to the scene of a call to finish shoveling and plowing a local gentleman’s drive. The kindness went viral worldwide, with a call to #ShovelItForward. (Photo provided)

“We are traditional and social media savvy,” Cohn said, which is why he held off posting the photo. “I thought it was going to get lost in the Super Bowl posts.” Instead, he created the post and scheduled it to appear after the Super Bowl — then went out to shovel his own drive.

Later, when he checked the photo, it had 150 likes. But each time he refreshed, that number leaped by hundreds. He noted, “You can’t plan viralness.”

The story hit the national news circuit after ABC News picked it up. Cohn found himself the voice of the department, since the firefighters involved weren’t in at the time.

“I don’t think we did anything differently than other departments would do,” he said; however, he added it’d be cool if others took the Greenfield firefighters’ example and helped each other. That became the start of #ShovelItForward. “It started trending worldwide.”

That was a happy accident, since Cohn had said it on the spur of the moment. But he hoped it would become a hashtag to connect those who can shovel with those who can’t. That seemed to be the case, as the East Coast found itself getting dumped on by snow.

“We were getting a lot of calls from people wanting to do something nice for the firefighters,” Cohn said. “We used our last breath of fame to collect peanut butter. We had reached a lull in the drive, but this got it back on the front page.”

The story wasn’t finished yet. On a happy note, the man for whom they had shoveled had a miraculous recovery and walked into the fire station. He even posed for a photo with the firefighters and paramedics.

“And we’re not done paying it forward,” Cohn said, noting the man and his wife have become really close friends with the department and will be helping out with a new hands-only CPR initiative.

At the end of the day, Cohn said he hopes their experience will inspire other to just do the right thing. “It was a lot of fun — it’s still a lot of fun. It really paid off . It was our ‘aha!’ moment.” Th e experience has given further motivation to the department.