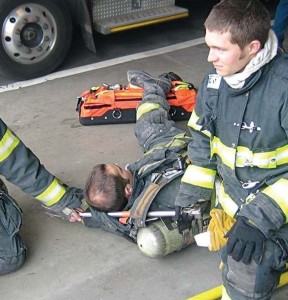 Placing a halligan or axe handle through the SCBA shoulder straps is fast and allows two firefighters to spread out so they can drag the down firefighter without bumping into each other, making the drag more effective. (Photo provided)

Every situation is going to be different. There is no set answer ahead of time for every situation a rapid intervention team may encounter. There are many different methods and ways to remove a down firefighter, not just the few discussed here. These are only a few of the methods discussed in the full “Rapid Intervention for the Understaffed Company” program and should in no way be considered rapid intervention team training or certification.

Once a down firefighter is located, the RIT needs to quickly check his air supply and determine if any additional resources will be needed: then begin to remove the firefighter the quickest way possible. There are modifications to some of the more common removal techniques that can greatly help a short-staffed RIT. Training and practice on any technique makes a crew comfortable with the basic skills, so when faced with horrible conditions and a trapped firefighter, they can focus on the rescue because the small things — such as tying a knot or converting an SCBA into a harness — have become second nature.

Sometimes the best option is to just grab and go. Grab a shoulder strap and start dragging, or the RIT can use whatever they have on them to give them extra grip. Placing a halligan or axe handle through the SCBA shoulder straps is fast and allows two firefighters to spread out so they can drag the down firefighter without bumping into each other.

Since firefighters come in many shapes and sizes, it’s possible that a 95-pound firefighter can find he or she has to rescue a 250-pound firefighter. A 2:1 mechanical advantage is a quick and simple way to cut the weight of the firefighter in half, and best of all it requires no knot tying. Simply place a rope end through a SCBA shoulder strap: or if you have a carabineer, clip the carabineer to the shoulder strap and pass the rope through the carabineer. This makes it easier to pull the rope because there is less friction. Keep both rope ends with you and move away from the firefighter. Secure or anchor one rope end and pull the other. It doesn’t matter which end of the rope is secured or how you choose to anchor it. The rope end can be sat on, kneeled on it, tied off to an object or secured around the firefighter with a carabineer, just as long as one end is anchored. Pull the other rope end to move the down firefighter, whose weight is now cut in half. If you run out of rope to pull, release the anchor and repeat the steps again until the firefighter is removed.

A 2:1 can also be used on stairs or for long, open drags by using a fixed anchor point to securing one of the rope ends. The rope end can be secured around a wall stud, column, or an anchor point can be made by placing a halligan or hook across a door or window frame. Some disadvantages to using a fixed anchor are that it takes longer to set up and longer to reset. It’s made the same as the simple 2:1, with only one difference: One of the rope ends is secured to an object instead of just being held in place. 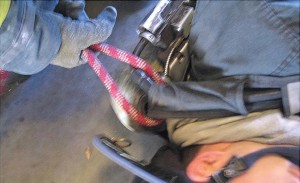 FIRST: A 2:1 mechanical advantage is a quick and simple way cut the weight of the firefighter in half, and best of all, it requires no knot tying. Start by placing a rope end through a SCBA shoulder strap. Keep both rope ends with you and move away from the firefighter. (Photo provided) 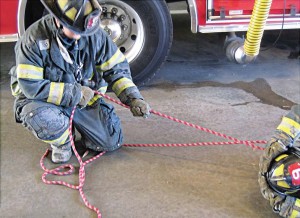 SECOND: Secure (anchor) one rope end and pull the other end. Pull the other rope end to move the down firefighter, whose weight is cut in half. If you run out of rope to pull, release the anchor and repeat the steps again until the firefighter is removed. (Photo provided)

This skill is used to rescue a firefighter who is trapped on a lower floor or in a basement. It was developed after the Line of Duty Death of Firefighter John Nance. He was a 27-year veteran of the Columbus, Ohio, Fire Department when he died after falling into a basement during a commercial fire. Nance was a few weeks away from his retirement date when he died.

Many programs teach this skill by using two separate ropes, each with handcuff knots or girth hitches tied at the end of each rope that is placed over the down firefighter’s arms and used to pull him or her out. This method requires a lot of personnel — one on each of the rope lines plus one to manage the hole. It also requires the RIT members to be able to tie the knots in poor conditions, then manage four separate lines while working around a floor collapse in a burning building where the hole will most likely be acting like a chimney for smoke and heat to escape the lower floor.

Stabilize the area first. You can use doors as ground pads to help distribute your weight away from the collapse area. If needed, pass a hose line nozzle first into the hole. If the down firefighter is conscious, he can use it for protection. After the fire is knocked down a bit, it is passed back up to form a “U” shape. The firefighter can straddle the hose line like he is riding a horse, or he can lay across the hose line by putting it under armpits. The hose line can be pulled out of the hole by simply walking backwards, away from the collapse area.

What if the firefighter is too large for just two RIT members to pull out on a hose line, or if the hose line needs to be left in place for protection? There are several things that will also work in this situation. A 2:1 can be used to pull the firefighter out by using it like before, just vertically instead of horizontally. Also, don’t forget about the drag rescue devices found on many newer sets of turnout gear. This is a built in harness that many RITs forget is there to help them move a firefighter.

Rescue from a second floor 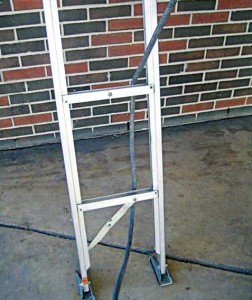 FIRST: Attach a carabineer to the end of a rope and run it behind the bottom two rungs of the ladder. Then run the rope all the way up and over the highest rung possible. Lower the rope down to the window where the RIT crew connects the carabineer to the converted SCBA pack and helps guide the firefighter out the window. (Photo provided)

What happens if the firefighter is trapped on an upper floor of the building? Is he low on air? What if the interior stairs have collapsed? It’s not always possible to drag a firefighter through the entire house and out the front door to remove him.

By putting up ground ladders earlier, they can now be used to remove a firefighter from an upper floor. It’s not an easy task to carry a firefighter down a ground ladder, especially with only a few sets of hands to help. If the RIT knows they may have to remove the firefighter out of a window, they can call command early and request a high point be set up at the window.

Inside, the RIT converts the down firefighter’s SCBA to a harness then waits for the rope end to arrive. The outside team raises a ground ladder as high as possible above the window, making a high point that will be used to lower the firefighter to the ground.

Attach a carabineer to the end of a rope and run it behind the bottom two rungs of the ladder. Then run the rope all the way up and over the highest rung possible. Lower the rope down to the window, where the RIT connects the carabineer to the converted SCBA pack and helps guide the firefighter out the window. The outside team uses the ground ladder like a brake bar rack to lower the firefighter to the ground. 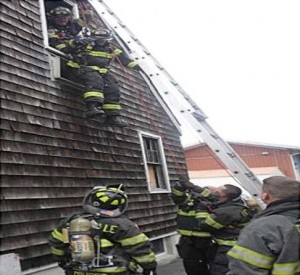 NEXT: The outside team uses the ground ladder like a brake bar rack to lower the firefighter to the ground (Photo provided).

This drill sounds complicated, but it is quick and easy to set up: especially if the ropes are pre-tied and if crews have practiced with it before. The ground ladder should already be in place as secondary means of egress and only needs to be moved to the window being used for the rescue. Hopefully a rope bag is already in staging. The key here is for exterior crews to have the high point already set up by the time the RIT crew gets to the window. If you think it’s a possibility that you might come out a window. Then call for the high point to be set up so it’s ready to be used as a Plan B.

Remember, operating short staffed might complicate an already stressful situation, but it does not change the fact that we must still bring our brothers and sisters home when they are in trouble.

“Rapid Intervention for the Understaffed Company” is a program that has been developed and taught in various formats at Firehouse Expo Baltimore 2013, Firehouse Expo Baltimore 2014, Virginia Fire Chief’s Convention 2015, FDIC Indianapolis 2015 and the South Atlantic Fire & Rescue Expo in Raleigh in 2015. It has also been taught locally in the Southeast. It was developed out of necessity by Dave Topczynski and Steve Truckenmiller of the Newport News Fire Department.