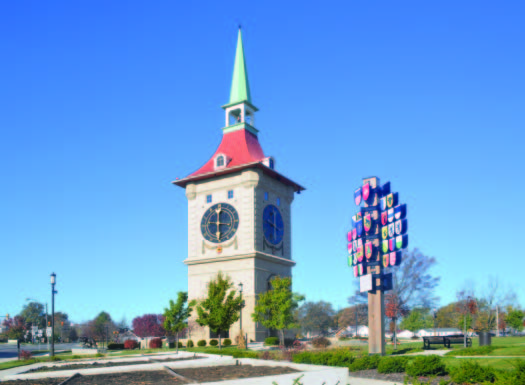 Standing 60 feet tall from the ground to the top of the finial, Berne, Ind.’s reproduction of the famous Bern, Switzerland clock tower is 32 feet wide square at its base, has four large clock faces, weighs approximately 1,216 tons, took four months to construct and displays animated fiberglass figurines performing scenes from the settlement of the city. (Photo provided)

“It has been a conscious effort from day one.”

Mark Settlemyre, president of the Berne, Ind., Chamber of Commerce, spoke of the Swiss spark mobilizing his fair community since 1852. That’s when a small troupe of 70 devout and rigorously conservative Mennonite Christian immigrants from Switzerland settled the community, naming it after their national capital. They quickly began replicating the homeland and lifestyle they loved.

“There has always been interest by the leadership to promote the Swiss image,” Settlemyre explained. “And it remains a conscious effort today.”

That single-mindedness took flight most recently as a concerted community development theme, and included the establishment of the Berne Community Development Corporation.

“That group was the one to build the clock tower,” Settlemyre said, referencing The Muensterberg Plaza and Clock Tower modeled on the landmark 13th century medieval Zytglogge tower of Bern. Enthusiasm for the project first blossomed among members of the business community, he explained, many of whom had ancestry dating to the pioneering Swiss settlers.

In 2002, Berne celebrated its sesquicentennial. It was at that time that the idea of doing something that could bring lasting value to the town, perhaps the building of a clock tower, was first publicly aired.

“The Berne CDC was formed at the end of 2002,” recalled local attorney David Baumgartner, a key player in the CDC and plaza/clock tower projects. “Our first meeting was in January of 2003. There was some money left over from the sesquicentennial celebration that was turned over to this new, not-for-profit organization as seed money to start the planning for the clock tower and plaza.”

“Once they got the vision out there and found support from people who were born and raised here but were not living here, things really started moving,” Settlemyre elaborated. A good number of them, including Keith Reinhard, chairman emeritus of DDB Worldwide, a prestigious global marketing firm based in New York City, were eager to give back to the community that had given them wings. 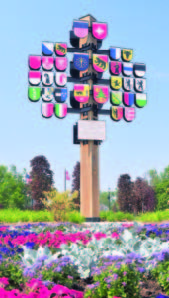 The canton tree post in Berne is one solid piece of pressure-treated pine from Arkansas, measuring 32 feet long and 18 inches square. There are 60 annular rings in the post, and it is inscribed with the crests of each of the Swiss Cantons, or states, plus a crest for the United States; Switzerland; Indiana; Canton Bern; Berne, Indiana; and Trachselwald,
Berne’s sister city. (Photo provided)

“The idea was and is to commemorate the values of the early settlers: to pass these values on to future generations,” Settlemyre said. He noted that the tourism benefit, while a recognized facet of the community development plan, was seen as a coincidental side effect of bolstering what project leadership envisioned as a “public tribute to the town’s abiding legacy of faith, courage, freedom, opportunity, perseverance, hard work, hope and vision.”

Fundraising and design work took until 2009. Groundbreaking on the long-envisioned clock tower and plaza commenced March 17, 2010.

Strategically positioned at the intersection of SR 218 and US 27, the formal dedication ceremony hailed the grand opening of the new facility July 31 that same year, during the community’s Swiss Days celebration. The annual event fills local ambiance with authentic music, costume, dance, food, craft vendors and friendly competitions such as the Steintoss.

Remarkable of the collaborative cooperation involved, over 300 people worked on the design, fabrication and erection of the clock tower. Each of the four clock faces is an 18-foot wide circle with hands up to 15 feet long made of gold anodized aluminum. Th e tower’s carillon is capable of playing over 1,000 songs. Th e glockenspiel contains 12 figures, each approximately 5.5 feet tall. Th e bell ringer in the belfry is 7 feet tall.

By the summer of 2012 a splash pad with 15 directional fountains, cylinder sprays and water jets was operational in the center of the plaza. The Settler’s Statue is also featured there, commemorating the arrival of the original Swiss settlers. Visitors to the location can also see the only stateside Canton Tree and a series of flowerbed quilt gardens boasting roughly 2,500 annual flowers and 4,220 crocuses planted in ornamental display to replicate traditional quilt blocks. It’s all illuminated with decorative light poles and adorned with park benches.

The all-volunteer steering committee worked five years through the steps outlined in their “8 Pillar” plan to secure $4 million dollars in private pledges to do all the construction.

“People marvel at what we have done, being such a relatively small city with a population of only about 4,000. Much larger communities want to know how we did it, but as we look at what has happened, the original 70 immigrants brought the theme over originally. It’s something that we are all proud of. Every development that we do now, we want to be compatible with our reputation of who and what we are,” Settlemyre affirmed.

Currently, the city enjoys a low 3.3 percent unemployment rate and needs more people to move to area. “We could use 300 new employees over the next 18 months to take care of growth,” he said.

To help inspire local businesses to adopt Swiss-tradition architecture as their own, the Berne CDC makes low-interest funds available to store owners for renovations and remodels that contribute to the Swiss identity. In addition, the chamber has aggressively implemented a “What can we do for you?” policy, making the effort to meet one-on-one with business owners in their stores, helping them develop cooperative promotions to effectively get people into their stores. “And you know,” Settlemyre said, “we have no vacant stores on Main Street.”

He also reports a trend in the number of businesses with longtime owners, who are ready to retire, being purchased by startup entrepreneurs.

“These are young folks full of energy, and we are attracting these new developments because of our positive image and atmosphere.” 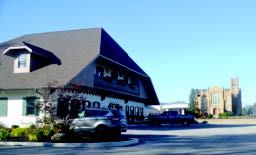 Until last year, Berne had the only Swissthemed McDonalds in the U.S. A change in ownership surrendered the facade to more conventional franchise garb, but the majority of local businesses have readily agreed to adopt the promoted Swiss architecture. Settlemyre is hopeful that everyone will ultimately see the light.

On the drawing board now is a video produced by the chamber that will promote the features, advantages and benefits of living and working in Berne. It will include interviews with local people and be used as part of the recruiting process for local human resources departments.

“If you want things to happen in your town, you have to get people in the town talking about them and continue to promote them,” Settlemyre said. “Communicate, one on one. Th is is very important and very effective. Community development is a two-way street. It takes team effort and working together for everything to work.”