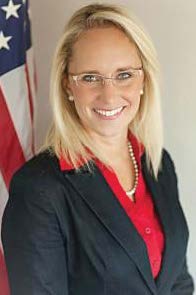 Nearing the end of her first term in the office, Findlay, Ohio, Mayor Lydia Mihalik has overseen enviable economic development in her city. During her next term she hopes to continue to oversee new partnerships that are in the works and facilitate a groundswell of community involvement in quality-of-life initiatives. (Photo provided)

Lydia Mihalik is the mayor of Findlay, Ohio, population 41,512, just south of Toledo. The “flag city of the U.S.” is also a micropolitan community that’s in growth mode.

The Municipal: Mayor Mihalik, please tell us a little bit about your upbringing in Indiana and how you ended up in Ohio.

Mayor Mihalik: I was born in Warsaw, Ind., at Kosciusko Community Hospital in 1979. My parents lived in Syracuse, Ind., at the time. I graduated from Wawasee High School in 1998 and then came to Findlay, where I studied political science and played for the women’s basketball team at the University of Findlay. I graduated from there in 2002 with a bachelor’s degree in political science.

The Municipal: Can you share your journey into the political realm? What were some of the career stepping stones that brought you to your current position?

Mayor Mihalik: During my time at the University of Findlay, I was fortunate to obtain an internship for the city of Findlay’s Development Department. Shortly before I graduated, I was offered a full-time position at the city. After about two years of employment, I was successful in obtaining a grant from the Ohio Department of Transportation for Transportation Enhancements for Findlay’s downtown in the amount of about $250,000. This win apparently made me a grant expert, because shortly after that I was offered the position of grant administrator for the Hancock Regional Planning Commission — a position I held until I was sworn in as mayor in 2012.

All told I was responsible for generating more than $19 million in grant awards for the Findlay/Hancock County region. The important part of this career milestone for me were the relationships I developed to get the projects done. Those relationships were vital to my bid for mayor in 2011.

The Municipal: Why did you feel that it was important to run for mayor? 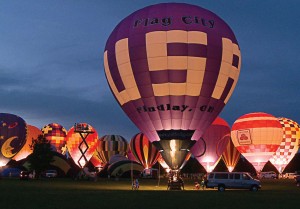 A strong commitment to flying the American flag led to the city’s designation as “Flag City, U.S.A.” in 1974. That moniker is often celebrated, including at an annual hot air balloon festival. (Photo courtesy of VisitFindlay.com: Hancock County Convention and Visitors Bureau)

Mayor Mihalik: I decided to throw my hat in the ring for the community CEO position because we were in a very fragile state, like most communities at that time. We were in need of new energy and leadership. Th is was my first chance at the election process as a candidate and it was a tough battle, but I won the primary in May 2010, and the general election in November 2010 with more than 70 percent of the vote. I am just now ending my last year of my first four-year term.

Much to my surprise I did not have a primary opponent this year, nor will I have a general election opponent in November. So it appears as though I will serve another four years beginning Jan. 1. I am perfectly happy as the mayor of Findlay and plan on being here as long as the community will have me.

I ran for mayor on a platform of commitment to progress toward a solution for our flooding problem, bringing much-needed growth to our economy and improving the way we deliver public service. I am proud to share that we have made outstanding progress on all three commitments.

A. Our flood mitigation progress will culminate next year with the acceptance of our chief’s report from the Army Corps of Engineers.

B. I believe we have created an environment that is conducive for private investment. Our economy is strong, with unprecedented private sector investment and job growth happening — along with the recent award from Site Selection Magazine as the nation’s No. 1 micropolitan area to expand or locate a business.

C. Our financial health has improved greatly in the last few years. We have gone from a $4 million deficit to more than $10 million in our unappropriated balance. We have “put first things first” by optimizing and improving the way we deliver public service, putting focus on our organization as well as the infrastructure we maintain. Our city is very strong.

The Municipal: What remains to be addressed?

Mayor Mihalik: Our workforce development issues are similar to most communities across the Midwest. Working with our workforce coalition, I hope to help lead an effort that provides for a sustainable and growing group of highly skilled and qualified individuals to help with the jobs of today and tomorrow. This task is monumental in scope and will take the entire community to complete.