Since 2001, 9/11 is a date synonymous with tragic attacks that claimed the lives of nearly 3,000 men, women and children in New York; Washington, D.C.; and Pennsylvania. However, in the years that have followed, Sept. 11 has come to stand for so much more. Through the institution of Patriot Day and the National Day of Service and Remembrance, Americans are called to remember the lives that were lost and to live up to the example of those who gave selflessly of themselves during the nation’s most critical moment.

In the wake of 9/11, Patriot Day continues to remind Americans of the price at which freedom must sometimes be purchased. In the New York metropolitan region and beyond, community leaders donate their time and e ort engage in projects that keep alive the spirit of unity and compassion that arose from that day’s tragedies. (Photo by Deb Patterson) 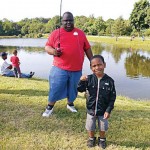 The Kiwanis Normandy 24:1 Club sponsors a number of events throughout the year to help kids in the 24 municipalities that comprise the Normandy School District in Missouri. This  shing derby is just one of the ways the club supports kids; it has also held school supply drives, literacy campaigns and more. (photo provided)

For some organizations, Patriot Day is not the day to make a difference in the lives of others, but simply another day to continue the work they perform all yearlong. They are the ones who are constantly reaching out to assist their communities and to build a better world. Without their donations of time, talent and treasure, budget strapped municipalities may not be able to make ends meet, improve area amenities, beautify public spaces or provide help for those in need. They are the heroes who make Patriot Day every day.

The play’s the thing

When Superstorm Sandy slammed into Island Park, N.Y., in October 2012, the south shore village saw more than its fair share of devastation and destruction. Homes were flooded. Possessions lost and relief supplies were hard to come by. Municipal funds were also scarce after the storm, and one of the projects put on the back burner was the replacement of a children’s playground at Francis X Hegarty Elementary School. The original structure flooded and was structurally compromised during the storm, and there was no money for a new one.

Thanks to a partnership between East Meadow Barnum Elementary School and Kiwanis International, this September kids will once again have a place to play.

“Sandy was really tough on all of us,” said New York District Kiwanis International Foundation Chair David Rothman. “We were the kind of people who would ordinarily be out volunteering to help others rather than accepting assistance ourselves. East Meadows adopted the Hegarty School and raised $18,500 through fundraisers, but then Kiwanis came through with a $25,000 grant and made Hegarty part of its 100th Anniversary Tour.”

A groundbreaking ceremony for the new playground was held April 25 with more than 100 people present.

Rothman said its opportunities like this that unite people from all walks of life.

“So often we take things for granted, do our own thing and assume nothing bad can happen. and we all have the ability to reach out and help one another get back on our feet.”

The Normandy 24:1 Club is part of Kiwanis and its partner, Beyond Housing, a community development initiative designed to solve problems in a comprehensive but focused way. The club works to combat the significant challenges facing communities within Missouri’s Normandy School District, now known as the Normandy Schools Collaborative.

“There are 24 small municipalities in that one area and they all share one vision, which is to create strong communities, engaged families and successful children,” said Barbara Thompson, a club counselor with Normandy 24:1 who sits on the Kiwanis International Board of Trustees.

“The area has gone through some rough times in recent years because the school district lost its accreditation and is being taken over by the state. Students have transferred to other districts, which placed a hardship on the Normandy School District because it must pay the transportation for the students who have transferred.”

To help alleviate the struggles facing those schools and their students, the club has organized back-to-school supply drives, sponsored tutoring and literacy programs and even helped fund a chorus trip to Carnegie Hall. “

The Normandy 24:1 Club collaborates with other community organizations such as Beyond Housing for the good of the school district and all the communities that it serves,” said Andrea Flynn, the club’s president. “We seek to help out the community in whatever ways we can, but as part of Kiwanis International our aim is always to serve children and to improve the world one child and one community at a time.”

“Patriots’ Day is a solemn occasion each year, especially in the New York metropolitan region, where leaders from Kiwanis clubs, civic organizations and chambers of commerce donate their time and e orts to engage others in collaborative projects that keep alive the spirit of unity and compassion that arose after Sept. 11.

“I have been privileged to be a part of many of these events and have seen how they provide a positive and helpful way to remember and honor those tragically lost in the 9/11 terrorist attacks,” he said.