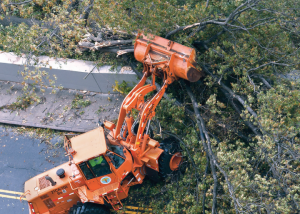 Among other considerations in advance of an emergency or disaster, fleet managers may be expected to maintain vehicle fuel reserves. A current, detailed list of all departmental assets and key vehicles, such as grapple trucks, front end loaders and backhoes, and where they’re stored, will also be valuable.

When events of cataclysmic proportions harness their destructive forces on communities and neighborhoods, it brings a semblance of reassurance to know that emergency workers and equipment are poised and ready to be summoned at a moment’s notice to become rescuers and responders.

Someone who knows how to prepare for such endeavors is Mario Guzman, general services manager for the city of West Palm Beach. In the state of Florida, residents and guests know all too well that they must continually be on a level of heightened awareness for weather phenomena and other similar disasters. It is an ongoing process of education that Guzman touts and teaches to those who must answer the call when emergency preparedness is essential. What is just as critical and vital, Guzman noted, is ensuring that during rescue and recovery operations, there are plans in place to effectively deploy and manage city fleets.

“Regarding emergency preparedness, there are numerous resources that one can tap to assist in an event of an emergency,” Guzman explained. “Although many of the practices are similar, such as fuel availability and location of assets, each respective geographical area has its own dynamics in which each fleet manager must correspond to.”

For example, in the Florida region hurricanes pose a lingering and ominous threat. Guzman said becoming enabled for quick response means that the impending event is approached from three separate vantage points: pre-hurricane preparation, “hunkering down” during the actual storm and post-storm assessment.

“Each organization should have a plan in place,” Guzman said. “The federal government has NIMS (National Incident Management System), which is a great start to draw a plan for emergencies.”

“Once a plan is created, it is imperative that it’s reviewed annually and always have a ‘dry run.’ The plan should address key points of contacts and their responsibilities. In the annual review key, personnel and phone numbers should be updated.” 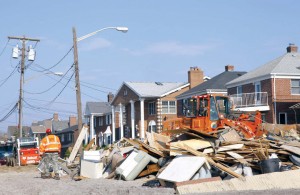 If the city plans to seek funding from insurance or state or federal sources for cleanup efforts, careful documentation of the cleanup — including how debris was handled, what vehicles were used where and when, and payroll aberrations — must all be indicated and explained. (Leonard Zhukovsky / Shutterstock.com)

Part of the working plan for the West Palm Beach area, Guzman explained, is to keep fuel reserves at 75 percent capacity during hurricane season. The level drops back to 65 percent in all other times of year. A detailed list of all departmental assets and their respective assets is kept current, and certain key vehicles, such as grapple trucks, front end loaders and backhoes, are stored in secure locations.

One of the thresholds the Florida community watches for, when establishing an approaching emergency situation with hurricanes, is when a storm is officially named. At that point the mindset shifts from status quo to state of enhanced action.

“At this point we meet with staff and indicate emergency points of contact and advise our staff to ensure they are safe in the event of a storm,” Guzman said. “The main focus is to have a plan with key points of contacts and procedures. You want to ensure that everyone knows what they need to do.

“We also work with corresponding agencies to combine resources. Our main focus is to remain safe and to ensure that our employees are safe. In the case of another event, such as a tornado or a terrorist attack, our main objective would be to assess the situation and provide equipment support to our first responders.”

The primary goal of a fleet manager is to be serve as a liaison to crucial services, he further noted.

“These include departments such as police, fire rescue, water utilities, and sanitation. For example, police and fire may need a road cleared, then the fleet division can coordinate with the parks department to be sure that the road gets cleared.”

“Aside from providing support to our organization and the citizenry, it is imperative that you have a personnel that is solely responsible for documentation and records retention. If your organization is going to seek funding for insurance purposes, or from FEMA, it must document all resources that were used for the storm only. Hence, normal debris does not count.”

Guzman cited instances where it was necessary to categorize piles of debris separately, indicating those that were caused by the event itself versus items that were considered rubble prior to the storm. Any overtime pay and salaries extended to workers must also be carefully meted out.

“It may take months to get funds, so it’s critical that all aspects regarding the response to an emergency are accounted for,” he added. And in those moments when there’s a sense of normalcy, there remains the forward thinking of readiness for when there will be another life-altering occasion.

“Prior to any event, you have a comprehensive maintenance program that is completed on a regular schedule,” Guzman said. “Our fleet division is highly demanded for its services, so we have to ensure that departments have the proper vehicles and equipment to fulfill their organizational mission.”