↓
Home→Cover Story→Will your municipality be ready for its building safety experts to retire?

As the publisher of national model codes for construction, the International Code Council engaged in conversation with its Members and stakeholders about emerging issues of interest to the building safety industry and all affected by it. A survey conducted by the National Institute of Building Sciences on behalf of ICC revealed information that, if not addressed in the coming years, these issues may impact the public safety of thousands of U.S. communities.

The survey of 25 multiple-choice questions went to building code compliance professionals at the federal, regional, state and local levels last spring. A total of 3,850 code professionals, representing all 50 states, answered a range of questions from salary and job responsibilities to educational background and retirement plans. The resulting data revealed an impending retirement exodus of the senior ranks of code officials.

Just as baby boomers are having an impact across other industries, code officials are making plans for retirement in significant numbers. More than 80 percent of respondents expect to retire within the next 15 years, and more than 30 percent plan to do so within five years (figure 1).

Such a massive exodus of public safety professionals could have a serious impact on municipalities — particularly those with smaller building departments. A third of the respondents work in departments of four or fewer employees; nearly a quarter have between five and nine (figure 2). These findings raise concerns about the ability to replace senior staff; opportunities for mentoring new entrants into the profession; and the maintenance of knowledge when staff retires.

Within departments, code professionals fulfill a variety of roles. Given the size of departments and the number of areas covered, most professionals have responsibilities in numerous areas. Respondents indicated that in addition to being responsible for safety inspections, 52 percent also reported responsibility for plan review and 46 percent in department management. (Respondents could select as many roles as applied to them.) A large-scale retirement could cause municipalities to face a backlog of plan reviews, safety inspections and permit requests that could slow construction projects.

How can a municipality prepare? 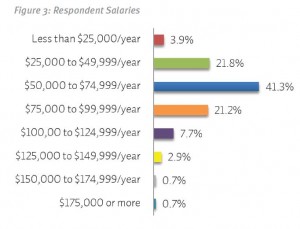 Municipalities must act now to recruit the next generation of code officials or risk a serious impact on public safety. Attracting new entrants relies on highlighting the important role code professionals play in community health, safety and welfare. The current generation of 20-to 30-year-olds entering the workforce is looking to make a difference, wants to work in exciting environments and wants to utilize the latest technology. A code-related career can fill these requirements.

Code professionals pride themselves on the role they play in assuring the health, safety and welfare of the communities they serve. A municipality can raise the profile of its code professionals and attract new candidates by highlighting contributions to hazard preparedness, public safety, sustainability and economic development. Establishing ties with parallel departments in the community, including police and fire, can be beneficial. Consistent messaging tied to important government initiatives, including resilience and sustainability, can also drive support.

Municipalities may consider extending recruitment efforts to disciplines not traditionally tied to construction. More than a quarter of survey respondents with bachelor’s degrees earned them in unrelated areas — particularly business-related programs such as business, management, administration, finance and so on. Th e skills required to be an effective code official are increasingly shifting more to customer service, critical thinking and public administration, and less on technical skills. 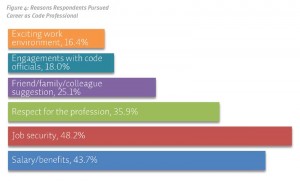 A municipality can encourage its code professionals to engage with high school and community college programs such as career/professional days, mentoring and internships. Technical high schools, in particular, can off er opportunities. Code professionals can serve on advisory boards and support integration of code-related activities into the high school curriculum.

Besides recruiting millennials, bringing experienced members of the workforce into the profession remains a viable option. Although 74 percent of survey respondents are currently between the ages of 45 and 64, nearly 35 percent of respondents entered the profession in their 30s, and another 28 percent while in their 40s.

Based on pending retirements, there is a need for immediate action. Raising the profile and building respect for code professionals can provide the visibility necessary to attract the next generation. Engaging with students, teachers and counselors — from elementary to high school and colleges — can help support development of a pipeline of new recruits. Increased visibility within the community can be equally valuable. Keeping an active dialog with code departments and understanding the value code professionals provide to communities is essential.

For more information on code careers, the code development process and free-to-attend public hearings, or to read the complete survey results, visit www.icccsafe.org/municipal.