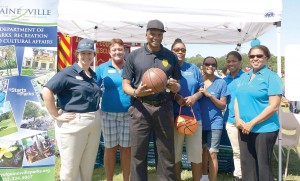 As budgets get stretched tighter and tighter, everyone is looking for innovative ways to complete civic projects.

Civic crowdfunding is an avenue that has met with some success. Crowdfunding is defined as the practice of obtaining needed services, ideas or content by soliciting contributions from a large group of people and especially from the online community rather than traditional resources.

There are many different crowdfunding platforms: GoFundMe; Kickstarter; Indiegogo; Fundrazr, an international platform; ioby, which stands for In Our BackYard and is usually for low-income neighborhood projects; Tilt; and more. Just about anything can be crowdfunded, and the concept is not unique to the United States.

In 2011 crowdfunding received support from Washington, D.C., when President Barack Obama signed the Jumpstart Our Business Startup Act into law. The legislation aims to loosen regulatory burdens on small businesses and has legalized equity crowdfunding.

In 2012 Citizenvestor, a crowdfunding platform strictly for municipal projects, was launched. Its founders said they wanted to solve the problem that “government never has enough resources to provide every project and services that citizens want.” Any government entity can post projects, and citizens can donate to it. Their donations are tax-deductible.

Joining Citizenvestor is free, but an 8 percent fee is charged on projects that reach 100 percent. That fee is added to the amount posted for the project. An all-or-nothing platform, it promises donors that the project will be fully funded or they won’t be charged.

“It’s a commitment to our donors so they can be assured if they donate to a project, it will go forward,” said Tony DeSisto, Citizenvestor co-founder.

DeSisto said what often happens is if a project is 75–80 percent funded, the city will put up the balance. Also, as the project goes live on the site, sometimes the city will receive donations from other local sources. Those amounts are added to the project fund total.

“We don’t charge them our fee for those donations,” DeSisto said.

Generally, 80 percent of project donations come from the local community. Twenty percent comes from outside the community, possibly former residents or people who have a passion for the project the city is trying to fund. 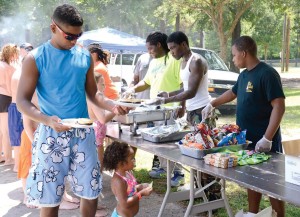 Crowdfunding allows less wealthy residents to be involved financially and hands-on in building the programs, parks and other community projects that they believe in, which in turn bolsters community spirit. (Photo provided)

“We’ve never had a project that’s gone over 40 percent that hasn’t been funded,” DeSisto said.

Citizenvestor provides a liaison on the team to help the city with email templates and other materials to help market the project.

“That’s the biggest contributing factor (to) whether a project gets funded or not,” he said.

The National Recreation and Park Association, a nonprofit organization funded through member dues, grants, registrations and charitable contributions, has started a crowdfunding platform for its members at www.fundyourpark.org.

Roxanne Sutton, senior marketing and communications specialist for NRPa, said the platform was launched last year. “Seeing how some park and recreation agencies had benefitted from crowdfunding, we saw how this could be a useful tool for all of our members,” she stated.

Fund Your Park is dedicated to parks and recreation and helps the agencies with the process. An application is used to choose the projects: NRPa provides the chosen projects with one-on-one support, such as helping them choose the scope of the project, providing communications and marketing tools, according to Sutton.

The campaigns are posted on the site for 45 days, and currently they are averaging two to three rounds of projects per year. NRPa has a 5 percent fee, and unlike Citizenvestor, the parks and recreation agencies keep whatever funds are raised regardless of whether or not the fundraising goal is met.

Several cities have used the platform more than once. Central Falls, R.I., and Noblesville, Ind., are among those that have returned with a second project.

Central Falls is the smallest city in the smallest state, and in August 2011 it became the first and only city in Rhode Island history to declare Chapter 9 bankruptcy.

Last year, however, the city repaired a beautiful clock tower with Citizenvestor funds, and this year 68 Citizenvestors raised $10,044 to fully fund new public art/trash receptacles and recycling bins for Jenks Parks. Once the project was funded, residents gave input on the designs.

Noblesville successfully funded its 2014 Fourth of July festival through Citizenvestor and is in the process of raising funds for this year’s event. Cindy Benedict, community engagement manager, said community engagement is a “relatively new initiative of the mayor’s and that they have been exploring different ways the public can be better informed and participate. Her research introduced her to Citizenvestor.

“Our Fourth of July Festival is not funded by the city,” she noted. Volunteer committees do the work, and they have always relied on corporations and businesses to put up the $33,000–$35,000 for a parade, live music, games, entertainment and a fi reworks display.

Normally a project has a 90-day fundraising campaign on Citizenvestor, but last year Noblesville had very short notice to start its campaign. “We had a little under 30 days,” Benedict said.

“Citizenvestor worked with us very well and as we got sponsorships those were added,” she said. “It’s changing times — people want to act on something right at the moment, and everybody’s doing jars in businesses. It reaches a point where that becomes too much.”

Because of the short amount of time, organizers only raised a couple of hundred additional dollars from the Citizenvestor site, but still funded the project.

Part of Noblesville’s motivation for using Citizenvestor was to get the word out to the community about how much it really does cost to hold this festival each year and that no taxpayer dollars are used.

“These things cost and we think it’s great for the community: so if you agree, help us make it happen” was the message they wanted to send. 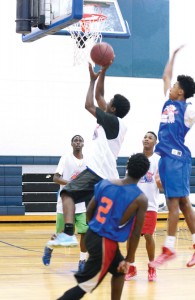 Youth play basketball at the Martin Luther King Jr. Multipurpose Center during the Summer Heatwave program in Gainesville, Fla. The intervention program served as a pilot for the city’s foray into crowdfunding last year. (Photo provided)

Not every project gets funded, though. One city that didn’t meet its goal was Tyler, Texas. It had been trying to raise $55,000 for an addition to its animal care facility.

Susan Guthrie is the assistant city manager and was in charge of the crowdfunding project. She said Tyler is known for its low tax rate: .22 per $100 of assessed value, which is on average two to four times lower than other cities its size.

“So public-private partnerships are part of our business model,” she said.

City leaders tried a few other things to fund the facility before crowdfunding. They added PayPal to the city’s website so people could donate directly online and then decided to try crowdfunding. Just like other municipalities, their thought was, “Let’s try it as a pilot.”

Guthrie said there are drawbacks to going this route. One is the administration fee; another is they had to go through Citizenvestor to edit the site. But it allowed them to reach a broader audience and there was no risk.

Even though their project wasn’t successful, Guthrie said she’d do it again. In hindsight, she can pinpoint some reasons for the lack of success.

“The timing was weird,” she said. Th e lag time between when the project was ready to go and getting the community on board wasn’t realistic, so she felt people may have believed it wouldn’t happen. Launching the crowdfunding campaign when “you’re ready to pull the trigger on something” is key, according to Guthrie. “Timing is everything.”

She also advised picking a project that resonates with the community: something they will be sentimental about. It wasn’t that the citizens of Tyler don’t care about animals, but she got the sense they felt this was something the government should finance, versus a recent performing arts theater project that they knew was up to them if they wanted it to happen 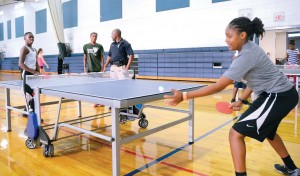 Youth play table tennis during the Teen Lounges that are a part of the Summer Heatwave program at the Martin Luther King Jr. Multipurpose Center in Gainesville. (Photo provided)

Tyler does a lot with social media: Guthrie feels it’s a great way to keep the citizens informed. They used it for the project, she said: “But could we have done more? Probably.”

She said even though this project didn’t succeed, “We’ll definitely
do it again; we’ll just pick the right project and the right time.”

Viability of municipal bonds and grants

Civic technologist and researcher Rodrigo Davis wrote a Jan. 29 article (www.pbs.org/idealab) comparing municipal bonds and crowdfunding. He said municipal bonds have been used for over 200 years, and while they also gave individuals the opportunity to invest in improvements to the city in a low-risk manner buying, a bond is complicated and expensive. Mainly wealthy people have access to them. Crowdfunding, on the other hand, is more accessible. Davis’ research showed that about one-third of the projects are parks and garden-related projects, 29 percent are event-based, and education and training are also popular campaigns. He also discovered that civic crowdfunding is concentrated in cities and that five states account for 80 percent of the projects. He contends questions are still unanswered about whether crowdfunding deters public investment or encourages it, and whether it widens wealth gaps.

Gainesville, Fla.’s Parks, Recreation and Cultural Affairs Department was looking for a way to double the number of youth served in its Summer Heatwave program when it was chosen by a local committee to pilot civic crowdfunding.

The program is a partnership with the Parks, Recreation and Cultural Affairs Department, the Gainesville Police Department and the State Attorney’s office. It’s designed to provide a safe place for kids through basketball, pool parties, life skills and teen lounges with a game room, snacks and a place to just visit with each other.

“We want to remove the barriers that prohibit something positive and give them extra activities they’re not exposed to normally,” said Alicia Antone, development and partnership program coordinator.

“We were not involved in that initial phase of choosing Citizenvestor; we were just told ‘you have been chosen to be the first source for crowdfunding,’” she said.

One of the reasons the department came to like crowdfunding was the time frame. Since the program started in July, attempting to get a grant wasn’t conducive. But they had a 90-day window to raise funds on Citizenvestor.

“(Marketing manager) Kat (Forbes) and I spent a lot of time going to events where hundreds or thousands of people would be present to get the word out about the campaign,” Antone said.

Citizenvestor told them that much of the electronic donations would come from outside the community, but that wasn’t Gainesville’s experience. But the women said the site helped with video pieces they could post on social media and they had banners and business cards designed. They were on the University of Florida’s radio talk show, local television talk shows and in newspapers. The majority of funding was offline, but they did get online donations.

They said the platform “certainly gets you visible places where you were not before” and also allowed for methods of payments not available before.

Antone said she and Forbes partnered and spent time doing mailings, making one-on-one visits and lots of follow-up calls and contacts during the campaign to keep donors informed and afterwards to thank them for support. Having a small team or dedicated staff for that purpose is key, Antone said. Pre-planning is important, too.

With better pre-planning this year, they hope to see more online contributions. Both women said the platform is best suited to capital improvement projects like a performing arts center or dog park.

“Because people can visit it, see it and feel they contributed to it. Because we were (funding) a program, it was more of an uphill battle,” Antone said.

She added that crowdfunding is “an old mission with a new name. The Salvation Army’s bell ringing campaign is crowdfunding — getting hundreds of individuals to donate small amounts.