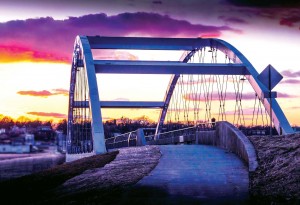 Aft er a decade of setbacks and challenges, the $29 million Morgan Street Bridge project in Rockford, Ill., was awarded in July 2011. The total cost of the project is $40 million; it included extensive land acquisition, a railroad consolidation project and reconstruction of both College Avenue and Morgan Street. (Photo provided)

The city of Rockford, Ill., with a population of 150,251, is the third largest city in Illinois. Referred to as the “Forest City,” it’s known for various venues of cultural or historical significance.

The settlement was incorporated as a village in 1839 and chartered as a city in 1852. Over the years the city has experienced growth in many areas: but now is a particularly remarkable time in infrastructure, job training and community development.

In 1999, city staff and a small group of area stakeholders kicked off what would become one of the most iconic public works projects in the history of Rockford: the Morgan Street Bridge. First constructed in 1916, and rehabilitated in 1960, it was deteriorating quickly and threatening east-west traffic flow on the near south side of the city.

“The city and state worked collectively to find the gap funding we needed in order to get the bridge built,” Rockford’s mayor, Larry Morrissey, said.

A new industrial park has provided a landing pad for more business growth and attraction in the city. Th ere has been a lot of job creation within the park, which surrounds Chicago Rockford International Airport.

The park was originally created to attract and retain industrial jobs and provide the public and private sectors with the tools necessary to compete within the new framework of a global economy. Tax Increment Financing investment was critical to its success: Morrissey said that while TIF proved to be a good tool in the park’s development, it’s not always enough due to declining tax rates.

A 2 percent hotel/motel tax is now funding the conversion of an old factory in town into a sports center. Th e $24 million capital improvement project required the joint effort of regional municipalities and state legislative members. Each entity pledged funds, which will be used in conjunction with the 2 percent tax to build and manage the facility.

“The parties really came together,” said Julia Scott Valdez, director of human resources and deputy city administrator for Rockford, who added that the sports center is expected to be completed by May 2016.

Other projects are in the horizon. By the end of May, ground will have broken for a $67 million upscale hotel. Rockford Suites is being built in a 13-story vacant building. “This is a unique project because it consists of historic preservation and new construction,” said Scott Valdez.

Historic tax credits and several other sources of revenue, such as E9, will pay for this project, which will hire local contractors.

In the past two years, Rockford’s downtown district has experienced major renovations. One of those projects, the Prairie Street Brewhouse, was underutilized for more than 50 years. Th e collective development team of local partners invested more than $12 million to renovate, resulting in a popular mixed use residential, commercial and retail property, which employs 181 individuals. 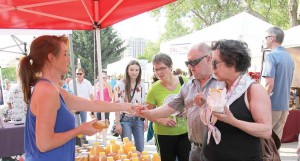 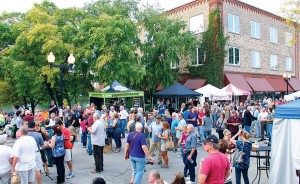 Back at the airport, a $5.1 million aviation maintenance training facility, Rock Valley College, is also being built. It’s a twofold investment — higher education and economic development will provide critical new aerospace training opportunities and help alleviate a shortage of qualified aviation mechanics around the country. Classes will begin in mid-August.

Morrissey, who has been mayor for 10 years, is passionate about entrepreneurism.

“It’s the heart of the community,” he said. “We want to build a culture here.”

The downtown city market is one example of entrepreneurship at its best, he said. Called Rockford City Market, as many as 5,000 people visit it each Friday. The initiative is a collaborative effort of several agencies, including Rock River Development Partnership, the city of Rockford and the Rockford Area Convention and Visitors Bureau. There is a new lot currently in construction that will include a pavilion and offer greater accessibility for vendors to market and sell products.

The 2014 Combined Spend Economic impact was nearly $4 million dollars ($2.4 million at the market, and $1.5 million at downtown businesses) and an estimated total economic impact of $8.7 million (Bureau of Economic Analysis assigns a 2.25 multiplier to the region).

“When people have jobs here, they eat, live and play here,” said Scott Valdez. “Live, work and play is everything we do.” 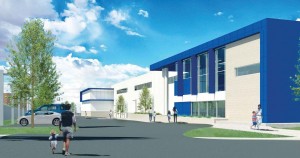 An old Rockford factory is being turned into a sports center. It is being paid for, in part, with a 2 percent hotel/motel tax. (Photo provided) 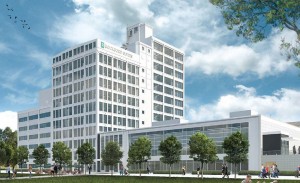 Rockford Suites is a $67 million hotel project being built in a 13-story, vacant building. Work is expected to be done by the end of 2016. (Photo provided)