↓
Home→Energy→Powering City Hall with the Sun 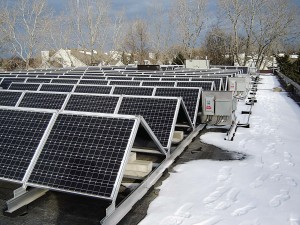 During the winter, when days are short and nights are long, energy collected by solar panels on Falcon Heights City Hall’s roof can be stored for later use. (Photo provided by Bart Fischer)

City hall employees in Falcon Heights, Minn., can call themselves sun worshippers of the safest kind: They don’t have to worry about sunburn or melanoma.

According to city administrator Bart Fischer, he and his staff have been enjoying the building’s solar panels for three years now.

“The reason we had them installed in the first place is because our city council has a goal of being a sustainable community. They put a lot of focus on sustainable practices. The solar panels easily fit that goal.”

The city has a contract with Dakota Electric to make sure its solar panels produce electricity, said Greg Miller, CEO of Dakota Electric Association. “We monitor the solar output on a monthly basis so the city can recover its initial investment,” Miller said. “We have access to monitoring software and can see the output on an hourly, daily or even weekly basis.”

DEA was able to work with solar panel manufacturer tenKsolar, a Bloomington, Minn., business. “The installation of the panels takes a couple days for this size of the system. Add to that a couple days for wiring and Internet connection for monitoring and the whole process takes about one week,” Miller explained.

According to CleanTechnica, using solar energy saves money; offers energy security, since one cannot buy the sun or turn sunlight into a monopoly; and decreases energy dependence. It also creates energy reliability and jobs, to name a few advantages. With storage, solar power could theoretically supply the earth with all its electrical needs.

A disadvantage that is being worked on is that solar panels stop producing electricity when the sun goes down — but batteries can store that electricity.

“In Minnesota the days are shorter and the panels get covered in snow for days at a time, so it is not just a daytime/nighttime (situation). This time of year the panels are black, so the snow tends to melt off in a couple of days,” he said. Snow load is a concern, too.

Entities also need to consider that their solar panels may outlive their roof. In that case, the array will need to be dismantled and then reassembled after re-roofing. In Falcon Heights, Miller said, city officials did an engineering study and had a fairly new roof — so they did their homework before making the decision.

Mayor Peter Lindstrom expressed delight at the energy savings the city has experienced.
“We couldn’t be more thrilled with the installation of solar panels on top of our city hall. More than 200 solar panels power, approximately two-thirds of city hall, which is also our fire department and public works facility: so it’s a fairly energy-intensive building.”

The response from citizens has also been enthusiastic, he added. “They support our efforts to build a clean energy future. We are proud to be a leader in renewable and are thrilled to see other local governments adopt these technologies.”
Fischer echoed Lindstrom’s words.

“This shows our commitment to sustainability, and there is the eventual cost savings once the payoff is realized — and the city gets great press for doing it.”

The Iowa Supreme Court ruled in July that a solar installation on top of a municipal building in Dubuque, Iowa, does not impinge on the area utility’s legal monopoly over electrical service, due to the project’s third party financing.