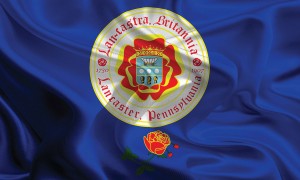 In 1907 a resolution was adopted in Lancaster, Pa., that said a municipal flag should be prepared. That directive was not carried out until 1926, however, when two copies of a flag design were finally made: one for council chambers and one for the office of the mayor.

A red rose is pictured on the inner circle, with an ornate shield resting upon it. On the shield, at the top, there is a Conestoga wagon representing transportation and trade; the bar and globes represent distinguished features of the William Penn coat of arms; and the sheaves of wheat at the bottom represent agriculture. A large red rose is thrown beneath the main design to emphasize the fact that Lancaster is known as the Red Rose City.

According to information provided by Lancaster, its name comes from the Roman occupation of Great Britain nearly 2,000 years ago. Originally the name was “Lancastra,” meaning “the camp of Lan.” The Romans had put camps at strategic points on the island: “Lan” was one of those camps, and it was so named by the original inhabitants. “Castra” was the Roman name later given to the same camp. Over time, the combination — “Lancastra” — became “Lancaster.”