The bad news is, Americans generate trash. Lots of it. Now, the good news: An increasing number of municipalities are finding ways to turn that refuse into fuel, reusable material and revenue.

The Arnold O. Chantland Resource Recovery System in Ames, Iowa, serves all of Story County. Even though it’s a city facility, it was established without the aid of state or federal money. (Photo provided)

Amid the convenience of disposability and the obsolescence of older products that have been swept into commercial oblivion by newer, better things, the residents and businesses throw away almost 1 billion tons of trash. That’s 2 trillion pounds, for those keeping score.

The traditional municipal paradigm offers two options for the disposal of that garbage: burn it or bury it. Combustible rubbish is loaded into kilns and incinerated. What cannot be burned is layered into landfills and covered with dirt. Neither process is satisfactory, and their cumulative effects have resulted in methane-producing mountains, air and water pollution, plus complaints from citizens assaulted by odor and the eyesore.

Some landfill operators have rescued a portion of the byproducts of accumulated trash by piping and burning the methane to heat nearby buildings and other facilities. Cities, counties and states have also launched programs to encourage recycling, with varying degrees of success.

Certainly much progress has been made to conserve resources in recent decades, but the nation still manages to convert only about one-third of its disposable trash into energy or recycled material.

Enter Resource Recovery Parks, which are municipally or privately operated venues for the receipt, recycling or disposal of garbage. Dubbed with ambitious names like “zero waste,” “nil to landfill” and “waste to wealth,” some resource recovery programs boast rates of up to 90 percent recovery of waste material for fuel or reuse.

A full municipal garbage truck may contain materials worth $200 or more, after the contents are sorted, bundled and shipped to willing buyers. Whether performed by machine or by hand, the recovery process at these dedicated sites is generally the same. The procedure begins curbside, where trash pickup is carried out by the city or a subcontracted entity.

The trucks proceed to the RRP and deposit their loads on the tipping floor, where large or dangerous items such as tires, mattresses and propane tanks are removed for separate processing.
The remaining material is fed into a shredder or flail mill, where the components are chopped up. Magnets remove the ferrous material and electrical eddy currents separate the aluminum items.
Organic material is separately processed for use as compost or fertilizer. The remaining product passes over sizers that allow small grit, glass and rocks to fall through the holes. These are the only elements to be taken to the landfill, and they may comprise as little as 10 to 15 percent of the total.

Air jets separate the lighter combustible material, which is compacted, bundled and taken to the power plant where it will be used to fuel furnaces to power boilers for steam energy. The reusable metal and plastic is sold to private vendors for recycling.

Doing it first and doing it right: Ames, Iowa

Ames, Iowa, was the first municipality in the nation to establish a resource recovery center without the aid of state or federal dollars — and the first city in the world to own such a facility. “We did it all through bonds,” said Lead Operator Robert Weidner. Ames’ Smart Trash Resource Recovery System will celebrate its 40th birthday this summer.

“Everything is mechanical,” said Weidner, who has worked at the center for 34 of those years. “We have gone through three renovations” from its bootstrap beginning to the present facility, which recycles or reuses more than 75 percent of the 200 tons of trash it receives daily.

Many similar facilities through the United States are privately owned and operated, and thus must make a profit to survive. The Ames center, however, doesn’t labor under that fiscal requirement. “We’re not here to make money,” said Weidner. “We’re just here to do what is right for the environment and for our people.”

The center serves all of Story County, which boasts about 90,000 residents, and derives its revenue through reasonable, fee-based services: $22 per pickup truckload of trash; no charge for up to 5 gallons of waste oil and only 25 cents per gallon thereafter; property assessments, which are currently approximately $9.25 per $1,000; and 20-year contracts with other communities in the county. 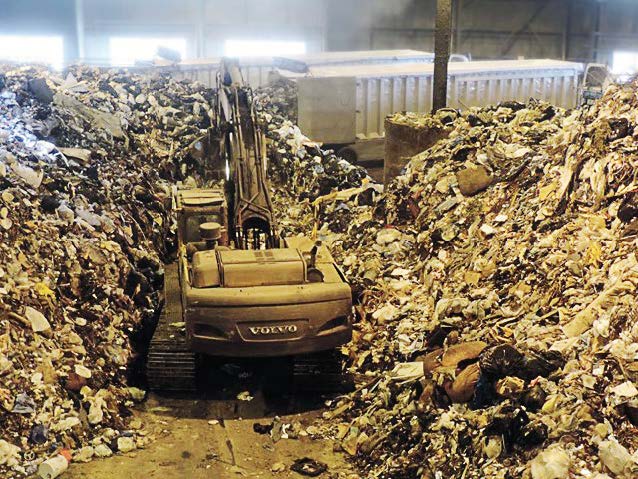 On the tipping floor at the Palm Beach, Fla., Renewable Energy Facility, a resource recovery park, about 60 percent of what comes in will be diverted from the landfill. Without the facility, the landfill would have reached its maximum capacity in 2005. (Photo provided)

City and county leaders, moreover, have enacted several cost-saving measures to reduce the tax load on its citizens.

Tips for getting started

What Ames has learned from four decades of experience can be applied by any municipality considering the option of establishing a resource recovery center or park.