Politicians often devote a part of their campaigns to pledging increased transparency in their administrations; citizens desire it as an important part of keeping their representatives accountable. When government is truly transparent, it helps answer questions of how taxpayer money is being spent, what parties are influencing the decision-making process and whether citizens’ concerns are being addressed.

The city of Gainesville, Fla., has taken an unusual step toward fulfilling that desire: The mayor and city commissioners have their emails posted on a forum that is open for all to examine.

Although citizens had been proposing this specific policy for years, Gainesville only adopted it within the past several months. The two mayors previous to Braddy did not favor the idea, and some city commissioners were also reluctant to pursue it. Gainesville presented its county commissioner’s office and a few other cities as examples of how the policy can work, and the mayor felt that it was time to join the effort to create greater transparency in city government. Braddy made the issue an important part of his campaign, and once his term began he went to work fulfilling that promise.

Of all the priorities that the city could have established, why did it specifically focus on transparency?

“Citizens by right deserve to know what is going on in city hall,” Braddy responded. “It’s their hall, and if you hold central to your belief that the citizens are in charge and that you are accountable to them, then you have to embrace transparency.

“The second purpose is for building trust. We have nothing to hide. We want people to have confidence in their local government. There were some previous issues with the city government that had undermined public trust, and we wanted to demonstrate that the public could have confidence in what we were doing.”

Even though there are many ways Gainesville could have improved transparency, it pursued this particular approach because citizens had been requesting it for quite some time. As in most cities, citizens have the opportunity to comment at the conclusion of city meetings, but Braddy felt it was important to offer another forum for expressing ideas and concerns.

Not everyone in city hall agreed that this policy was necessary. Some people did not see the need for creating this venue for transparency, since any correspondence with city hall is already a matter of public record and can be accessed by submitting a formal request for that information. Others, according to Braddy, simply didn’t want to make transparency a priority. Reservations involved how the city would handle correspondence containing sensitive information, such as social security numbers and other financial details.

To assuage these privacy concerns, the city developed a safeguard. Citizens can access a special section of the city’s website dedicated to officials’ emails, but they do not see a real-time snapshot of the mayor’s inbox. When a city official opens an email, there is a 24-hour period where he or she has to decide if that email can be posted on the page for public viewing or if it should go into a separate folder designated for correspondence containing sensitive information and that is not posted online. People can still access that segregated information but are required to make a formal request for it at city hall. “We had guidance from our legal staff on this issue, but most people do know that if they send something to city hall they are creating something that goes into the public record. If people specify in their email that they want to have sensitive things kept private, it can be put into that sensitive file,” Braddy said. 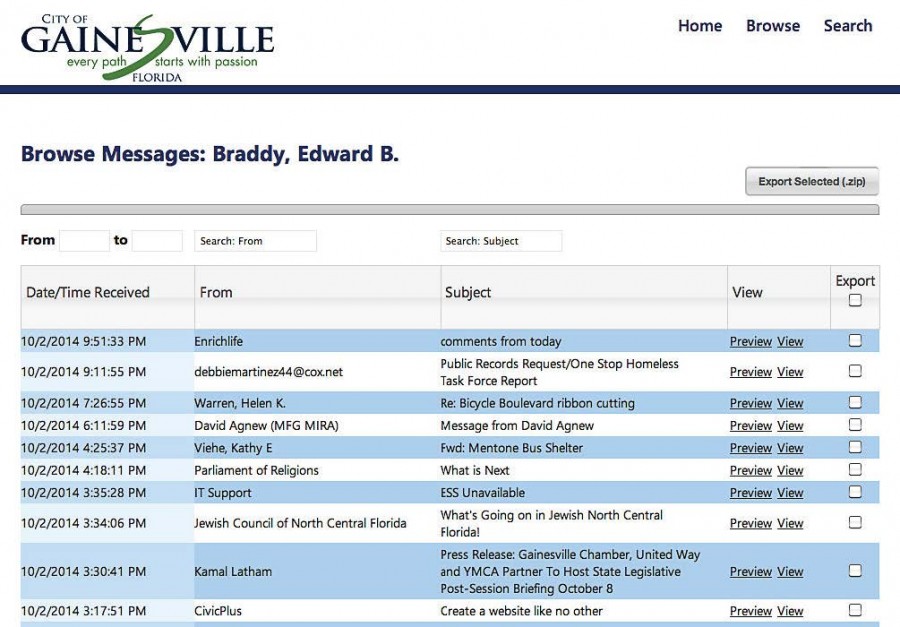 An Oct. 2, screenshot of the email inbox of Gainesville, Fla., Mayor Edward Braddy shows just a few of the correspondences that are made available to the public to read on a daily basis. Correspondences containing sensitive information is not made publicly available, but can still be obtained via formal request. (Photo provided)

The webpage displays not only emails received by the mayor and commissioners, but also their outgoing replies. This is another important part of transparency: It’s one thing for a citizen to see that the mayor has received his or her email, but it is something else to be able to see whether officials are actually addressing comments and concerns from citizens.

According to the mayor, the emphasis on greater transparency in Gainesville does not stop with making emails public. The city leadership is continually looking for new ideas for improving transparency. It’s currently discussing ways to make people better aware of how the city’s decision-making process works, and additionally, all budget briefing documents are made public. The city’s website has also recently been reconfigured to make it easier to navigate.

Although the policy is a recent development, it seems to be working well for Gainesville. It will be up for review in a few months to gauge what changes, if any, should be made, but Mayor Braddy is pleased with the results he has seen so far. “I would recommend this to any city. It’s not terribly expensive to setup or maintain, and it’s a good effort to demonstrate to people that you want to build trust, which is essential to city government.”

The mayor feels that this approach has been successful in building a better rapport between city hall and the community. In tandem with similar initiatives from city hall, a transparency policy like this one has the potential to increase citizen involvement in the community. If citizens sense that their leaders are more accessible and see how their officials respond to input, they may become more motivated to participate in civic affairs.

The transparency that citizens seek from politicians can work the other way, too. When the people who have an intimate knowledge of the neighborhood’s problems contribute their solutions freely, it improves city hall’s understanding of what its constituents value and what they expect from their leadership.