Local governments are leading the way toward cleaning up the environment. One case in point is the city of Pittsburgh, Pa. While the city shed the extreme signs of the “smoky city” years ago, it wants to do more to improve the environment. In 2012 it released version 2.0 of the Pittsburgh Climate Action Plan, which targets to reduce greenhouse gases by 20 percent between 2003 and 2023. Government organizations, as well as citizens and businesses, are asked to do their part and reduce emissions from a variety of sources.

For city managers, road maintenance and waste collection trucks are easy targets for improvement. Each vehicle is driven tens of thousands of miles and consumes thousands of gallons of diesel fuel a year. The challenge is finding a clean, sustainable solution that is easy and economical — one that ideally uses a renewable fuel that is carbon-neutral, less expensive than diesel and leverages current fueling stations and maintenance facilities. Who knew the solution was in the city’s backyard?

Enter Optimus Technologies, a local startup dedicated to reducing greenhouse emissions and fuel costs for medium- and heavy-duty trucks. Last year, Optimus was looking for fleets to pilot its new biofuel conversion system — a system that, relative to diesel, decreases lifecycle emissions up to 80 percent and can reduce fuel costs up to 25 percent. Optimus was introduced to city managers through the Pittsburgh Region Clean Cities Coalition, one of nearly 100 nonprofit membership organizations nationwide that educate and promote the use of alternative fuels. Such organizations are funded in part by the U.S. Department of Energy.

Optimus approached the city with a proposal that would significantly reduce diesel truck emissions while reducing fuel costs at the same time. The solution was relatively simple, especially considering the alternatives.

Grant Ervin, sustainability manager for the city of Pittsburgh, next to a truck fitted with Optimus Technologies’ renewable diesel solution.

Optimus’ Vector manifold and fuel tank can be attached easily to the truck frame, as shown. 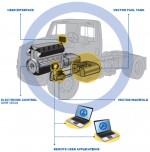 Recently approved by the EPA, Optimus’ solution is a bolt-on conversion system for medium- and heavy-duty trucks. It is a bi-fuel system, meaning it enables trucks to run on one of two fuels. Optimus’ solution runs primarily on a wide range of Optimus-certified renewable diesel fuels, or on pure biodiesel — B100 — with diesel being used primarily during start-up and shutdown. Such an approach eliminates the need for expensive overhauls of the engine and fuel tanks as can be required with other approaches.

The Vector system is placed in-line between the fuel tanks and the engine. It comes with software that optimizes the use of advanced biofuels without driver input. It also enables wireless tracking and monitoring of system performance.

Acceptable fuels, both renewable diesel and B100 biodiesel, are made from the same sources, such as distillers’ corn oil, a byproduct of ethanol production; soy oil; and recycled cooking oil. Such nonfossil fuel sources are sustainable and can create fuel that is 25 percent less expensive than diesel. Due to the breadth of fuels supported, Optimus has developed a fuel partner network that provides fleets with a variety of providers that can service a fleet’s private fueling facilities.
Optimus’ solution utilizes existing maintenance facilities without the need for expensive modifications or time-consuming training of mechanics. Private fueling facilities can be used after some simple modifications, making the solution easy and affordable to adopt.

Optimus is proud to claim its solution is the first EPA-approved advanced biofuel conversion system for commercial trucks. Although it is the first in the U.S., similar technologies have been approved and available in Europe for over a decade.

CNG: An Alternative Full of Surprises

The Vector competes with other alternative fuel solutions, with compressed natural gas being the most commonly known in the commercial trucking industry.

Compressed Natural Gas is becoming well known as a fuel type, but it has many surprises for those who want to use it in truck fleets. Let’s look at just two of these surprises.

First, CNG may be cheaper than diesel at the moment, but the costs to implement it are amazing. With CNG, new refueling stations must be built at a cost that typically ranges from $1 million to $6 million. In addition, current repair and maintenance facilities cannot be used without significant upgrades and certifications. In some cases it is more cost effective to raze a current garage and build new. With these costs, it will take many years to achieve a payback. In comparison, Optimus’ solution can provide a payback of less than a year for some fleets.

Second, CNG is not really a clean fuel or environmentally friendly. It may be, relative to coal, but not necessarily relative to vehicle fuels. For instance, no one is really talking about the impacts of fracking or the fact that CNG is a nonrenewable fossil fuel that, when used for transportation, can dramatically increase greenhouse gas emissions. CNG reduces some tailpipe emissions but it increases others, such as methane. The EPA indicates methane is 21 times more potent than CO2 as a greenhouse gas.

A recent Penn State University study, “Issues Related to the Transition to Natural Gas Utilization in Pennsylvania Transportation,” found that methane tailpipe emissions from CNG vehicles can be increased by over 100 times when compared to diesel. It further stated: “Unfortunately, it is evident that despite the supposed greenhouse gas benefits of natural gas utilization, CNG vehicle fleet tests are showing that CNG provides little improvement in CO2 equivalent emissions and may emit higher net greenhouse gases per mile of operation.”

It’s ironic that there is a perception that CNG is a clean, inexpensive fuel. It may be cleaner than some, but it is not as clean as pure biofuel. And as for costs — buyer beware. When you look at the costs of the total solution, it is definitely not cheap.

Last year, Pittsburgh converted five of its International model dump trucks and has trialed them trouble-free since then for road maintenance and snow removal operations. The vehicles have run more than three-quarters of the time, even on the coldest of days, on locally sourced biofuel.
Regarding fueling facilities, the city upgraded its aging, private facilities at the same time to support multiple fuels using a grant from the Pennsylvania Department of Environmental Protection.

“We are very impressed and very happy with the Vector systems’ operations, especially during the harsh winter we just had,” said Paul Ostrowski, fleet contract manager for the Office of Management and Budget. “We were pleasantly surprised by how easy it was to add the conversion systems and by the emissions improvements they provide to our road maintenance trucks. We can see how Optimus could help meet emissions mandates for all types of municipal fleets.”

A city representative noted that there has been no additional maintenance needed as a result of the system, and that the biofuel the city can use costs about 25 percent less than diesel in the Pittsburgh area.

“The city is proud of its innovation history and we were glad to assist Optimus in trialing their solution,” said Grant Ervin, sustainability manager. “The city has been happy enough with the performance of the vehicles that it is in the process of adding more units.”

In the end, with hundreds of millions of gallons of renewable fuels available throughout the nation, using biofuels really is the easiest and least expensive way for government and commercial fleets to reduce carbon emissions, displace petroleum and reduce fuel costs. Optimus is pleased it can help such truck fleets reach their goals.