↓
Home→Products→Press Release→Completion of a one year, one million dollar retooling initiative 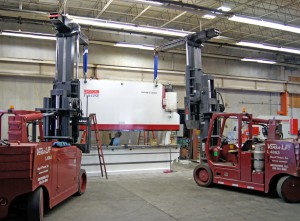 The Godwin Group affiliate Champion Hoist & Equipment Company announces the completion of a one year, one million dollar retooling initiative. In January 2013, Champion Hoist & Equipment began the project as a proactive effort to streamline and improve product manufacturing process so as to meet demands of unprecedented brand growth. Champion nearly doubled sales in 2013 from several years earlier. Machinery, which was given to Champion by sister company Godwin Mfg., was starting to show wear under steadily increasing demand. The decision was made to invest in new tooling and machinery upgrades so that Champion could continue to ride their wave of growth for years to come while maintaining quality. Some of the improvements included replacing a majority of the major fabrication equipment with new, higher capacity Fab-Line machinery. Tom Millen of Fab-Line said “Fab-Line Machinery was happy to partner with Champion Hoist as we have with other Godwin Group companies. The Godwin Group of manufacturing facilities has been focusing on increased production capability while also improving part quality. The investments they have made will put them in a great position for several years and we are glad to have developed this partnership.” Champion also upgraded their hydraulics department with several state-of-the-art lathes and milling machines so as to increase hydraulic cylinder production. The manufacturing upgrades wrapped up last month with the installation of a fully automatic, high capacity material saw with an automated stacking table that was designed by The Godwin Group founder Pat Godwin Sr.

Located in Dunn, NC., Champion is a leading manufacturer of American made hydraulic truck and trailer hoists. This family owned and operated business is part of the largest privately held truck equipment manufacturing company (The Godwin Group) in the US. Champion’s operation is housed in a 230,000 square foot facility and provides hoists for both public and private dump truck and trailer equipment.