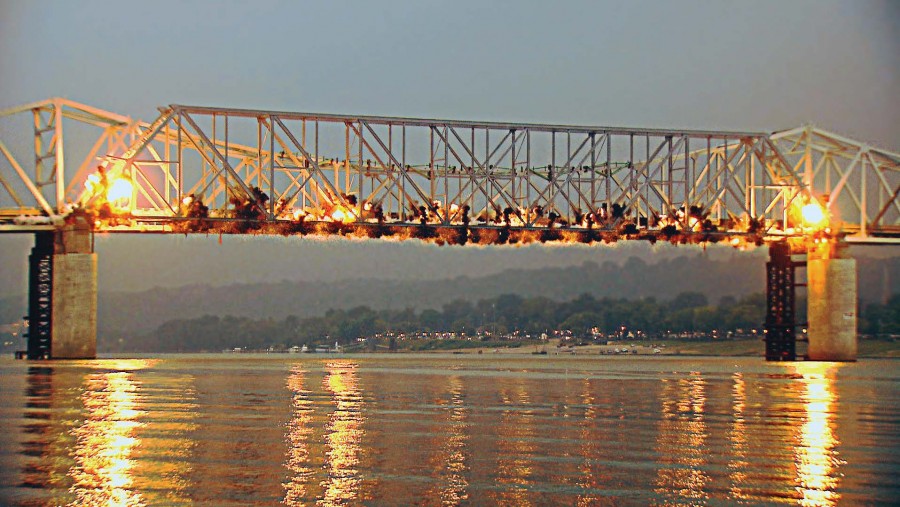 On Dec. 20, 1929, the people of Milton, Ky., and Madison, Ind., gathered to celebrate the opening of a bridge that would link their two Ohio River towns. Eighty-five years later, the communities came together once more: this time to commemorate the bridge’s refurbishment as well as its place in history.

At nearly one-half mile in length, the truss of the Milton-Madison bridge is the largest of its kind in North America and possibly the world.

“The Milton-Madison bridge slide was a unique and challenging experience to be part of,” said Will Wingfield of the Indiana Department of Transportation. “In 2008 we realized that the original bridge that was built in 1929 was rapidly coming to the end of its life and was in serious need of repair.”

Conveniently, it was around that time that the economic stimulus bill was signed into law. In February 2010 the project was awarded $20 million in federal funding under the American Reinvestment and Recovery Act.

“At that point, we could really start looking into our options,” Wingfield said.

There were plenty of things to consider, especially how closing the bridge would affect the economies of both communities and cause commute times to swell. The nearest detour was an hour away. Officials and contractors also had to plan for the traffic under the bridge and contend with the natural environment, which included a peregrine falcon nest.

Ultimately, the Kentucky Department of Transportation decided not to build a new bridge but to instead put a new steel truss on top of the existing piers, which would be refurbished. Original estimates suggested that the project would cost around $131 million and require the bridge to be closed for well over a year, but when INDOT opened up the bidding, it hoped to find a firm that would minimize closure time as well as costs.

The contract was awarded in September of 2010 to Walsh Construction of LaPorte, Ind. The company not only came in with a bid of $103 million — 20 percent below the original figure — but also a promise that the bridge would be closed for less than a full year.

Wingfield added that public involvement played a huge role in designing a bridge that met local needs while still being cost effective. The communities of Milton and Madison were engaged through public meetings, a Project Advisory Group and ongoing consultation with project stakeholders, including property owners, business owners, elected officials and neighborhood associations. 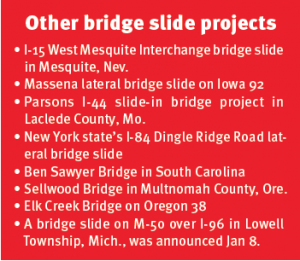 “The best part about this project was the fact that the solution wasn’t decided by the state but rather by the private sector,” he said.

What was that solution? An innovative bridge “slide” technique that moved a new 2,427-foot-long, 40-foot-wide truss along steel rails and plates and into place atop existing piers, which were rehabilitated. The truss included two 12-foot lanes and 8-foot shoulders — twice as wide as the original bridge — and a 5-foot-wide cantilevered sidewalk.

The project gained attention from local and national media, something that the small communities rarely attract. When the 100-foot concrete span sections of the bridge were lifted into place along the Kentucky side of the riverbank and slid into position, it was the kind of event people came out to see. The demolition of the original bridge attracted crowds as well. 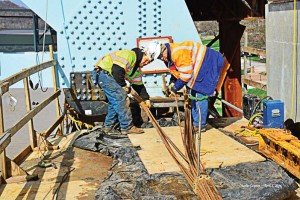 Crews prepare a nearly half-mile long truss for installation over the Ohio River this spring. The new Milton-Madison Bridge was moved along steel rails and plates and into place.
(Photo by Charlie Gannon, Courtesy/Walsh Construction)

“It really became a happening,” Wingfield said. “People would bring a picnic and watch the action for a while. Of course, sometimes it was about as exciting as watching grass grow.”

There were snags along the way. The bridge was closed longer than anticipated due to high water. Tourism in the towns suffered, but funds were set aside to help them weather the economic hit.

“We were fortunate that the project occurred when it did. The original bridge was built with a Model A in mind, and after 85 years, it was time for something new,” Wingfield said.

“It was a lot of work, but it was my pleasure to work with these two communities over the past few years to see this project through to completion.”