Previously a heavily industrial city, Niagara Falls, N.Y., is a popular destination for tourists from around the world. After economic downturns and the Love Canal disaster, though, Niagara Falls worked to diversify its economy and looked to expand its tourism industry while also revitalizing its downtown, embracing a greener image and focusing on community development. 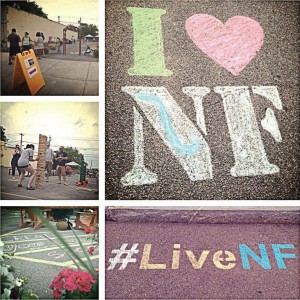 Sunday in the PARK-ing Lot encourages people to rethink spaces and do fun activities in Niagara Falls. Occurring once a month during the summer, each month offers a different theme. July’s focused on sustainability and children, and a professional theater group performed “Shakespeare in the PARK-ing Lot” in August. (Photo provided)

For one thing, the city tried to learn not to put all its eggs in one basket. For 10 years now it’s taken tourism seriously as an industry. In the past, according to Dyster, tourists were “like crocuses coming in the spring and going when it got cold.” Currently, the city and the western region of New York are taking steps to keep them throughout the year.

Approximately 10 years ago Niagara County and Niagara Falls combined their visitors bureaus, forming the Niagara Tourism and Convention Corporation. NTCC aims to enhance economic prosperity for whole region through domestic and international promotions of the area. Another major investment has been in accommodations for visitors. Eight hotel projects are in progress.

“There are three different tourists,” Dyster said, “and they all have different reasons for coming.” They include Canadians, rubber-wheeled tourists from the Northeast and the rest of the U.S., plus international tourists from around the globe. “It’s very impressive to see over holiday weekends.”

Heritage tourism is another area Niagara Falls is seeking to target. It has plans to build the Niagara Experience Center, which will highlight the area’s history in an entertaining fashion. With the resurgence of interest in Nikola Tesla, the city is also considering an interpretive center about his history. The Underground Railroad is prime territory to explore, too, with ground having been broken for the new Niagara Falls International Railway Station and Intermodal Transportation Center, located in an area where Harriet Tubman had once led slaves to freedom in Canada.

The state of New York will open up possibilities, too, by tearing down a portion of the Robert Moses Parkway that has separated Niagara Falls from the scenic Niagara Gorge.

“Locals think the gorge is as spectacular as the falls,” Dyster said. The removal of this stretch of the parkway will make way for multi-use trails and possible outdoor activities like rock climbing; however, Dyster said it would be done in a way that will keep public safety and the environment at the forefront.

While focus has been given to tourism, industry still plays an important role in Niagara Falls.

“Green” has become a keyword.

“I would like to think we’ve learned something from Love Canal,” Dyster said. “We are looking for greener industry … industry that will be better neighbors. We are seeking businesses and industries that are compatible with the green image we are trying to achieve.”

GreenPac Mill, a paper mill as large as three football fields, is one cutting-edge company that has come to the community. Another green company, Globe Speciality Metals, also has a plant in the city and produces polysilicon, which is used in the creation of solar panels. 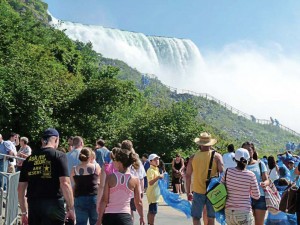 Niagara Falls receives tourists from all over the U.S. and the world to see its falls. Within the past 10 years the city has been focusing in on the tourism industry. (Photo provided)

“We want to rebuild the economy in a balanced manner,” Dyster said, noting there is much less heavy industry in the city now than there was in the ’60s and ’70s.

New York Gov. Andrew Cuomo’s prompting for a plan to stimulate economic growth in the Buffalo-Niagara region, which had been lagging compared to other parts of the state, has also helped the city strengthen its economy. The Buffalo Billion Investment Development Plan aims to tackle high unemployment rates, shifting populations and urban blight, and has made funds available to help the region complete economic redevelopment projects. Other funding that has helped Niagara Falls complete various projects has come from Seneca Niagara Casino revenue.

Revitalization work has also occurred downtown, with the help of USA Niagara Development Corporation. One such project has been the redesign and reconstruction of Old Falls Street from the entrance to Niagara Falls State Park to the Conference and Event Center in Niagara Falls. The organization has also helped with strategic demolition of old structures. Another strong partner, Niagara County Community College, launched a major downtown revitalization project: It took 93,000 square-feet of the old, shuttered Rainbow Centre Factory Outlet, located downtown, and placed its Niagara Falls Culinary Institute after the interior was gutted. The effort has opened the way for other projects downtown.

Community development is another important facet for Niagara Falls. Dyster noted they knew it was important to get innovative projects underway, from music and art festivals to outdoor activities, to encourage younger generations to stay in the area. The city views quality of life as an important part of economic development and retaining and attracting residents, particularly young people fresh out of college.

“We are starting to see signs that demographics are turning around,” Dyster said. “We are maintaining our young people and getting in the lottery to attract more.” 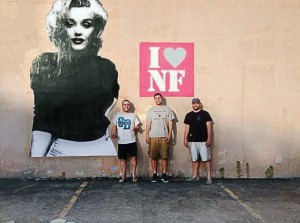 Old building facades are getting sparks of life in Niagara Falls, N.Y. This one received a Marilyn Monroe mural. (Photo provided)

Live-NF, or #LiveNF, has been a popular effort through social media and other avenues to attract young people to the city.

“We have several programs to address the needs of young people coming out of school,” Dyster said. “We have a housing program designed to help them purchase a home or pay their rent. It’s based on the ratio of student loan debt to income.” As part of the program new college grads have to move to targeted neighbors, which Dyster stated aren’t the worst, but rather “tipping point” neighborhoods that have some empty homes and need renovation. Dyster noted that in particular, young people are a major force for renovation and revitalization efforts.

Current residents’ thoughts on what they would like to see in the city are also polled. During Pints for Progress, residents pay to enjoy a meal and drinks while sharing small and innovative ideas to make a difference in the city’s future. “They vote on the ideas and the winner gets the money collected at the door,” Dyster said.

Volunteerism further creates a place where people want to stay. Niagara University regularly sends students to clean up selected neighborhoods, and volunteers come from citizens, too. Additionally, a “clean mob” is alerted to cleaning projects via Twitter and Facebook and then descends on those parts of the city to clean up.

Curbside recycling began last month, after the city’s recycling rate fell to 4 percent. The new program will provide residents with a 65-gallon refuse container and a 96-gallon recycling container, to be picked up every other week, in order to encourage people to recycle more and throw out less. “We are getting lots of questions, particularly from older people. But as we got out and explain, they are saying ‘that’s not bad,’” Dyster said.

#LiveNF has also encouraged artistic volunteers to spice up the city through various art projects that turn everyday objects into fun works of art. One project involved artists painting fire hydrants, often with themes relevant to its location. Murals on the facades of old building, in addition to painting benches, have also been done. Additionally, events have been hosted, like Sunday in a PARK-ing Lot, to encourage people to rethink the spaces around them.

“All of these projects have common themes. All were volunteer led. All took an unattractive daily asset and made it different through local art. All have been popular with local residents. All were inexpensive,” Niagara Falls Community Development Department Director Seth Piccirillo stated. “When we do these projects, we want to simply create something different and something better. In doing so, we are looking to encourage others to do more and be creative through public art and different thinking in general. That’s what #LiveNF is all about.”