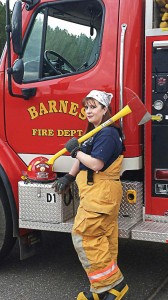 Deanna Glinski is a firefighter with the Barnes Volunteer Fire Department in Wisconsin. Last year she had her own fire to fight when her newly purchased home burned to the ground. (Photo provided)

Deanna Glinski is used to fighting fires. After all, it’s what she’s done for nearly 13 years as a volunteer firefighter with the Barnes Volunteer Fire Department, Barnes, Wis. But she never expected an assignment that would hit so close to home.

On May 14, 2013, Glinski was leaving job training in Duluth, Wis., to go home for the day. As she was driving, she noticed smoke coming from the direction she was heading. She was in Superior, Wis., at the time — about 40 miles away. As she got closer she knew something was terribly wrong, so she stopped at the station to find out what was going on.

Fellow firefighters said there was a fire in Gordon, 15 or so minutes southwest of Barnes. “We knew we’d get paged out,” she recalled.

She went home and prepared a suitcase with her four children’s’ clothing and grabbed a container with important documents. Next, she called her husband, Ben, also a volunteer firefighter, and told him about the fire and to get home right away.

“I told him to go to Hayward,” she said. By that time, the fire was heading north.

She called her mom, who lived south of Barnes, in Hayward, and went back to the fire hall. Still no page. After getting water bottles and a few things together, it came in. She headed to the Barnes Ranger Station, checked in and waited.

“By this time, it was very smoky and the wind had picked up,” she said. “Now the fire was coming at us.”

She and the other volunteers were ordered to go evacuate a Barnes subdivision. “The evacuation seemed like hours,” Glinski said. Next, they headed to an area only 2 miles from a home she and her family had recently purchased.

“I knew the fire had come through that area,” she said. She deployed a mere 100 yards from her house, “but I couldn’t see anything because it was midnight, so it was dark.”
She asked one of the firefighters to check on her home, which was located near Ellison Lake. “He came back and I knew it was gone,” she recalled.

After the fire, the community quickly came together. Food was purchased and meals were prepared for those who fought the fire and those who lost their homes. Luckily, Glinski and her husband had insurance and were able to get a settlement quickly and pay off their first mortgage in the first payment. The next day they decided to rebuild on the same site.

The whole time she was evacuating people and fighting the fire, she was too busy to think of the home she and her family were about to move into. Glinski said she knew she had a job to do, and that was that.

The wildfire that day was epic. It was the biggest fire, started accidentally by a logging company, she had ever handled. However, she uses that day to help others in a similar situation. Glinski briefly appears in a National Fire Protection Association Firewise video, produced by the Wisconsin Department of Natural Resources, which explains the dangers of wildfires and how to be “ember aware.” Unfortunately, the Glinski home had been surrounded by numerous white pines, with branches hanging over the house.

“Maybe this fire will convince other people that this can happen to anyone,” she said.