Combining education with the thrill of drag racing, police officers and other emergency personnel are curbing illegal street racing by bringing racers to the track. The goal of one organization called Beat the Heat is to educate young people about all the implications of illegal street racing — from fines and losing personal property to death — while building positive bridges between the kids and the first responder community. 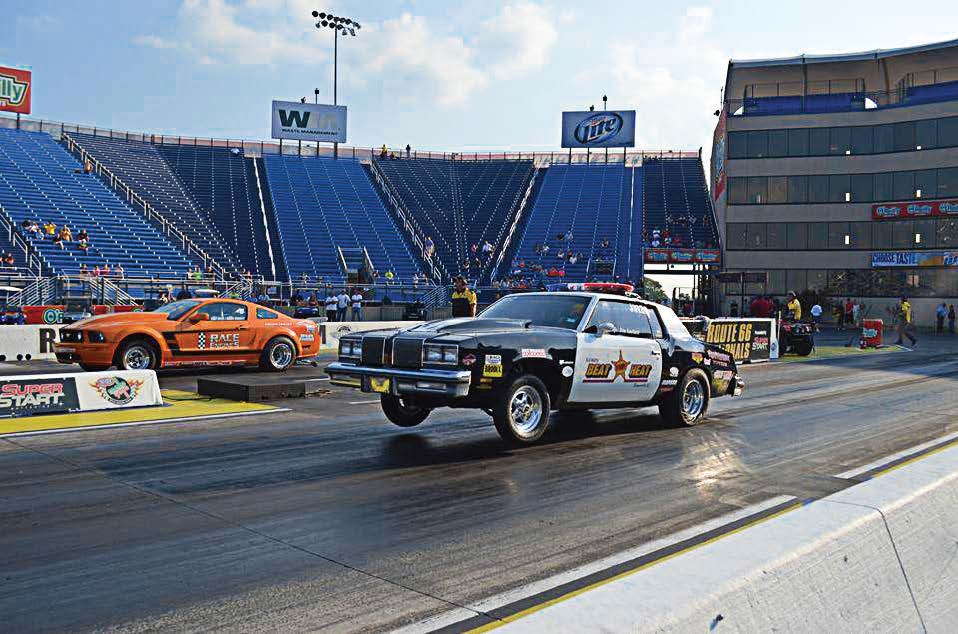 Beat the Heat is a program that often goes beyond the track to fulfill this mission. According to President Tom Brown, a lieutenant with the Waskom, Texas, Police Department, the program goes anywhere there are kids for whom it might make a difference.

Brown and others have traveled across the country, meeting with other chapters and stopping by schools and other events, including those sponsored by their partner, the National Hot Rod Association. They even traveled to one of the “Fast and Furious” London releases after receiving an invitation to share their message. They were there eight days, sharing that, unlike in the film,“in real life people get killed — there is no script,” Brown said.

“It has to be the worst job for either police or fire, when they go to an accident and there’s a fatality,” he noted. Officers have to alert parents and family members of the death.

“Our duty is to serve and protect, there is nothing we can do but be there,” he added. “There’s no script — how do you tell parents in a general way their child is dead?”

Brown dreams about some of these calls. He recalls one incident in Texas where three girls were leaving a Sonic drive-thru when they were broadsided by a boy street racing in a pickup truck. All three of the girls were killed. One of them was the boy’s sister.

Beat the Heat aims to prevent such tragedies by stressing that street racing is illegal, while drag racing is a sport. Its message is “come to the track,” a controlled environment with emergency personnel on hand if something goes wrong.

Beat the Heat started in 1984, after Sgt. Don Robertson of the Jacksonville, Fla., Sheriff’s Department challenged street racers to race him on the track. The organization has boomed. Chapters span the entire United States and even abroad, in countries like the United Kingdom and Australia. Nationally, there are 500 chapters: Texas, Oklahoma and Florida have the most.

The organization was originally only open to police, but after Brown became president, he opened it up to other emergency personnel. “They see the same things we do,” he figured. No public funds are used by participating first responders. Participants seek out sponsors or foot some of their own expenses.

One important factor for him is they are not talking at the kids, but rather listening and talking to them.

“They’re looking at us as a fellow racer, as a friend — not just as some cop,” Brown said, noting they never call him by his rank. “They’ve made me a better person.”

The experience has also imparted on him the importance of family. Brown’s wife and grandkids all come out and support him, and his son races with him.

Each chapter has a different schedule for races. Some race once a month, while others race twice a month.

“Ninety-five percent of what we do is education,” Brown said, noting chapters will offer programs for churches, schools, service clubs, Scouting organizations and more; participate in parades; or display their vehicles at different events, including all NHRA National events, youth education and leadership events, car shows and all American Drag Racing League events. “Education is the most important (part).”

Brown’s Mustang has been a very useful teaching tool, since kids get very excited about it. It used to be a drug car, but was converted into a cop car; when speaking with kids he shares this story and emphasizes they could also lose their vehicles through illegal activities.

Besides London, Brown and others involved in Beat the Heat have traveled long distances to further their mission of education. Recently they traveled to Muncie, Ind., and Ohio, in addition to meeting and racing against other chapters across the U.S.

After a teacher in Ventura, Calif., learned about the program, she asked the group come out as a reward for students. Brown and representatives from the Oklahoma Highway Patrol and Amarillo, Texas, Police Department drove all the way to California for three days and did programs at the school, and at additional schools that had heard they were in the area.

“We educate law enforcement, too: If you see a young person with a tuned car, if they are not doing anything wrong, leave them alone. If you insult their car, you’re insulting them and just making an enemy,” he said. “This is the car of their generation.”

Overall reactions to the program have been very positive. On the chance a parent expresses concerns about their child spending time at a track, though, Brown is quick to point out the track’s controlled environment, and the child is hanging out with 20 or so cops in a place where there is no alcohol. He asked one mother “Where would you rather they be?” 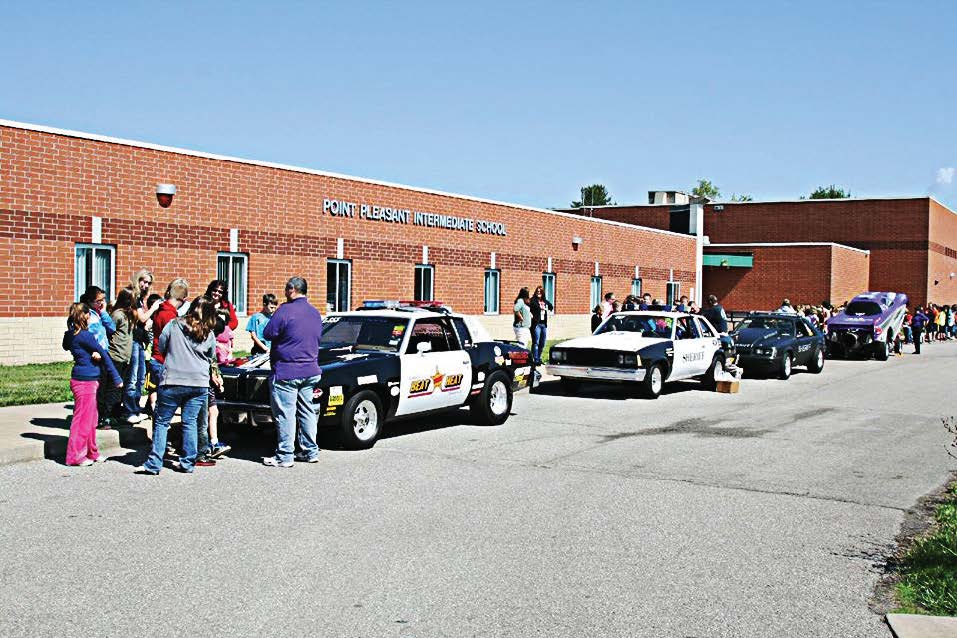 Beat the Heat members from Georgia, Indiana, Illinois, Oklahoma and West Virginia talked to 400 kids at Point Pleasant Intermediate School in West Virginia — much to the delight of both students and teachers. (Photo provided)

Youth outreach is a major component of what the North Georgia Beat the Heat team does. Beat the Heat has given them an avenue to approach kids in way that they will want to talk. Beyond curbing illegal street racing, the program seeks to educate kids about driving safely, the dangers of drugs and alcohol, importance of staying school and more, while building positive associations between them and law enforcement. (Photo provided)

The North Georgia Beat the Heat team is a family team comprised of father Gerald Cooley Sr. and his sons, Gerald Cooley Jr. and Andy Cooley. The three have been involved with Beat the Heat since 2008, when they launched the local program.
Between the three of them, they represent both fire and law enforcement. Cooley Sr. has been a firefighter with the New Salem Fire Department in Dade County, Ga., since approximately 1999. Cooley Jr. is a deputy with the Whitfield County Sheriff’s Office in Dalton, Ga., in its P.A.C.E. unit, which is stands for Pro Active Crime Enforcement; he has been in law enforcement since 1989. Andy has been a deputy with the Dade County Sheriff’s Office in Trenton, Ga., since 2000.

“It’s not as bad as it is in the bigger cities,” Deputy Cooley Jr. said of illegal street racing in their area. “We don’t have the big groups, we just have the individual kids.”

Through the Beat the Heat program, the Cooleys have engaged youths in their communities and others. “A lot of them are involved — a lot of the high school kids. We’ve got quite a few of them to the track.”

Depending on schedules, their team generally makes six or seven races a year. “We have challenge races, where we race against different people. If they win, they get a T-shirt.”

For the Cooleys the biggest part of the program is getting kids to open up and talk to them, something they probably wouldn’t do if their only association was of them in a squad car. The team visits local high schools and speak with students fifth grade and up. Other avenues have been a career fair in Georgia, where approximately 17 high schools from five counties show up.

“We do the World of Wheels car shows,” said Cooley Jr., noting that masses of people, including children and adults, come to those shows. When the Cooleys display their cars at events, they wear their team shirts rather than their uniforms: Cooley Jr. saying it helps people who might otherwise be intimated or frightened by officers to be able to approach them.

“At these events, Cooley Jr. stated, “It goes beyond street racing.”

One particular topic is driving safely from using seat belts to new laws like Georgia’s Move Over Law and its Super Speeder Law. “We get literature from the Governor’s Office of Highway Safety and hand them out.” He added, “We want to educate the people about the laws.”

The Cooleys’ team is willing to travel, too.

For information, Cooley Jr. can be contacted at (706) 264-2251. Additionally, people can visit the team’s Facebook page by searching “Beat the Heat North Georgia.” The main Beat the Heat website can be accessed at www.beattheheatinc.org.

“The most rewarding program I have been a part of is Beat the Heat,” said Det. Marty Dunn of the Hamilton County Sheriff’s Office. Dunn has been with the office since 1995, working in patrol, SWAT and undercover narcotics.

“I joined the ranks of Beat the Heat in 2006, after several young people lost their lives in the Chattanooga area during illegal street racing incidents.”

Dunn noted after bringing the program to the Chattanooga area, there was a decline in street racing and growth in attendance at the local drag strip.

As a part of Beat the Heat, Dunn participates with high schools and the local Brainerd Optimist Club. Chattanooga has also hosted two Beat the Heat World Finals, which have been well-received by the community, according to Dunn. The 2014 World Finals for Beat the Heat will be Nov. 7–8 at Texas Motorplex in Ennis, Texas, in conjunction with Fun Ford Weekend.
Beat the Heat’s mission is made possible because of officers and firemen who believe in reaching out to young people and great companies in the motor sports community assisting the program along the way, Dunn said.

“We are partnered with the Army’s Youth and Education Service Program and the National Hot Rod association, along with many other local motor sport programs around the globe.”

He added through the years Beat the Heat has continued to grow.

“We have extended our outreach to include other harmful activities that are claiming the lives of our youth, such as texting and driving, illegal drugs and alcohol abuse,” Dunn said. “If we can reach one young person with our program then it is all worth it.”

Beat the Heat on Top Gear.

Beat the HEAT Down Under in Australia.