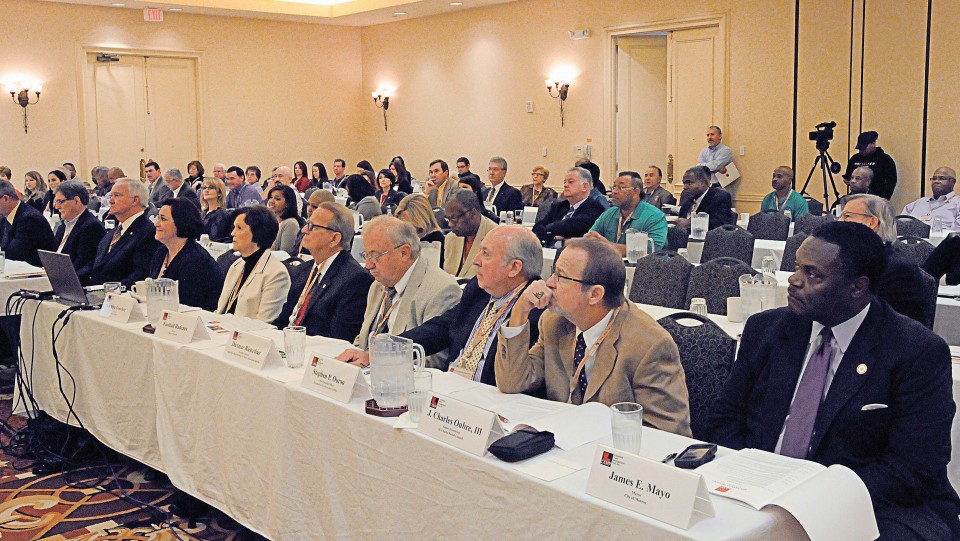 Several mayors, clerks of court, assessors, finance officials and others turned out to the 2013 LAMP Annual Meeting. LAMP has 636 local Louisiana governmental units participating in its pool, with 96 of those participants being cities, towns and villages. (Photo provided)

After 20 years the Louisiana Asset Management Pool continues to go strong, with 636 local Louisiana governmental units participating in the program and pooling a total of $1.6 billion in local government funds. Of those participants, 96 are cities, towns and villages that together have pooled $460,606,310.64.

There is no pressure to join; all governmental units have done so voluntarily, and maintain daily liquidity with easy access to their funds via phone, fax or Internet with no transaction fee.

By pooling together, local governmental units receive investment muscle they might not have garnered on their own.
“lamp accounts range in size from $1,000 to nearly $250 million,” Chief Executive Director Theo Sanders said. “Participants are not required to maintain a minimum balance and may invest for as short as one day. Through economies of scale, lamp is able to provide participants a competitive yield on their funds while ensuring daily liquidity and safety of principal.”

The ease of access is extremely important, particularly for smaller, rural communities where access to the Internet or a fax machine is still not always easy to come by. Sanders noted some of those smaller cities also depend on part-time civil servants, which makes lamp’s phone availability a valuable tool to meet their schedules.

This ease of access is just one of lamp’s main objectives, in addition to the preservation of principal — the primary goal — and providing a competitive yield. “We make sure funds are principally guarded,” Sanders said.

According to Sanders, by pooling funds participants also gain access to professional management otherwise only available to larger institutional managers.

“Before lamp a local government unit may have used a local financial institution,” said Sanders, noting in such situations they might not have received all the pull larger investors would. “The lamp pool is large enough to attract the attention and service of the very best investment managers in the country.”

Sanders also noted there’s a little bit more transparency and more resources involved with lamp. Thanks to the co-op endeavor, he added, “We are local government for local governments.”

“Lamp is governed by a board of directors consisting of nine to 14 members elected each year by the participants,” he said. As for operations, Sanders explained the investment pool is operated by a nonprofit corporation, lamp Inc., whose officers include the president, the Honorable John Kennedy, Louisiana State Treasurer; and a chief executive officer and chief administrative officer charged with the day to day operations of the program.

“There are no stakeholders above (the participants),” Sanders said. “They can decide if they don’t want to be in the fund any more. Flexibility is very important, which is why they have easy online access to their account or they can call a dedicated team of professionals.”

lamp also operates using administrative efficiency, meaning staff and overhead are kept to a minimum while still maintaining responsive service. Between the professional money management and this administrative efficiency, lamp is able to generate an attractive yield and a low expense ratio for its participants. Due to its stability, many state legislators view the pool as an opportunity to meet the needs of their district with governmental entities entering into a program they can count on.

Another benefit was launched in October 2006, when lamp’s board of directors implemented a fee rebate program that returns excess income not needed to pay day-to-day operating expenses back to pool participants. To date, the program has rebated more than $12 million.

Despite financial crises in 2008, the funds performed well.

“lamp was well-positioned for it. In 2007 we had already divested from various types of investment instruments that proposed headline risk. lamp’s conservative approach and foresight has kept the pool’s principal safe,” Sanders said.

For Louisiana municipalities, lamp has proven to be a plus. Mayor John Overton of Maringouin, a town of approximately 1,100, said since 2003, lamp has given his community better rates than the banks the town deals with, plus same-day access to funds, no transaction fees and immediate, fully secured access to its account. lamp’s leadership is always helpful, he added, answering questions and providing the support that’s needed. 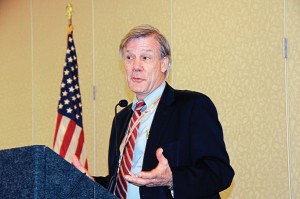 Other municipalities and governmental units have utilized returns from the program to purchase much-needed supplies, according to Sanders. Fire districts have employed funds to procure fire equipment, like new hoses or boots; one governmental unit even put funds toward the purchase of trash cans. Others have also used them to offset fees for other services they use.

“Since inception, lamp has generated more than half a billion dollars in interest for Louisiana public entities to reinvest in their communities and most critical priorities,” Sanders noted. “We combine the efficiency of private enterprise with the protection of public policy to deliver conservative transparent investment management to all local governmental entities — large or small, urban or rural. We remain committed to safety of principal and getting the best return for our participants.”

With this objective in place, lamp has consistently earned a AAAm rating from Standard & Poor’s, the highest rating available to such a fund. It has also received a 19th consecutive unmodified opinion from the Louisiana Legislative Auditor.

Some of its success has been due to partnering with several Louisiana public entity member associations to market the pool and increase participation.

“It’s been a true success story for Louisiana,” Sanders said.

Of course, Sanders noted some trends are emerging. One in particular is localized pools like lamp are here to stay. Other carefully watched trends include money market reforms, occurring since the recession and affect lamp and other similar pools; and the need for more efficient local government management. Finally, most importantly, according to Sanders, is relationship management. lamp regularly meets face to face with pool participants and engages with 25 local government conferences.