This February found some of the nation’s top middle school students in Washington, D.C., competing at the annual DiscoverE Initiative, the Future City Competition. DiscoverE, a self-described “consortium of professional and technical societies and major U.S. corporations,” chose “Tomorrow’s Transit: Design a Way to Move People In and Around Your City” as the 2013 contest theme.

The competition began last fall as 40,000 middle school students from 1,350 schools became involved in the regional stage. Students used SimCity software to design a virtual city as a team and write an essay on their work. To add a visual element, they were also required to use recycled materials with a cost of no more than $100 to build a tabletop model of their city.

Once in D.C., the competition was fierce for the grand prize: a trip to Space Camp, along with $7,500 to be used by the winning school’s science, technology, engineering and mathematics program.
First place went to St. John Lutheran School of Rochester, Mich., for its city, Gongping. Chosen for second place was Valley Middle School of Oakland, N.J.; the name of their city was Whenua Aotearoa. Home Education Associational Resources Inc. of Rockwall, Texas, received third place honors for its city, Eisenhower.

A member of the Huntsville, Ala., team, Jaqueline Martinez, found value in the project beyond winning the Best Futuristic City Award. 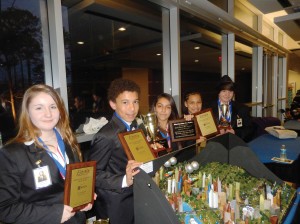 Academy for Science and Foreign Languages students from Huntsville, Ala., present their entry to national judges in Washington, D.C., during the 2013 Future City competition. asfl won the Best Futuristic City Award. (Photo provided)

“To me, winning Future City was the first step to my future accomplishments. It has helped me realize that there are many job opportunities out there for me such as engineering,” she said. Facil Mudando was the name of the city she and her teammates from the Academy for Science and Foreign Language submitted. asfl imagined a new way of transporting people.

“Our Congestion Prevention and Reduction system combines a super-fast highway that zips everyone along at 80 mph. It is fully automated and controlled by computers. It’s as easy as telling your car your destination, and the car, along with the CPR system, takes you there both quickly and safely,” she said.
“In addition, our city operates a dirigible freight line, which reduces congestion by transporting freight above the city in hot air balloons. Congestion is reduced even more by our underground tube-freight system that carries goods, garbage and recyclables to their destination,” added teacher Angela Traylor.

Bentley Systems has sponsored the competition for the past 18 years. Greg Bentley, CEO, said in a press release that the transit challenge highlights a pressing need that everyone recognizes. But it’s especially relevant for today’s middle schoolers, who increasingly value sustainable mobility beyond cars, for their present circumstances — and ultimately as future city dwellers.

“There’s no better way to engage young people than by asking them to bring their imagination, resourcefulness and unbridled enthusiasm to bear on a challenge pertinent to them. We ardently support Future City and its efforts to let young people experience how exciting and rewarding stem-based careers like engineering can be,” Bentley said.

Ultimately, however, the competition is about engaging students in the future, helping them understand it in order to have their help in creating it. asfl student Abbey Dutton found that connection.

“It’s more than winning a prize to me. It has taught me to appreciate all the planning that goes into creating a city and how much engineers are involved in that process,” she said.

In an independently conducted evaluation of the program, the Concord Evaluation Group found that participating students gained a better understanding and appreciation for not only engineering, but their own communities. They learned how to work in teams, were able to apply engineering design to experiences they encountered — as Dutton expressed — and ultimately became better citizens.

In addition to the top three winners and two honorable mentions, the competition recognized 25 Special National Awards Winners. To see a complete list of the winners, visit futurecity.org/awards.