Is your community at risk?

Wildfires occur all over the country, not just in the western part of the United States. (Photo provided)

California is plagued by wildfires, but little is it known that every other state is at risk for them as well.

Every year thousands of wildfires burn millions of acres across the United States. It’s not a question of “if,” but rather “when” the next wildfire will threaten a community.

The northeast and the southeast regions experience the most wildfires, according to Lucian Deaton, senior project manager of National Fire Protection Association’s Wildland Fire Operations Division.

Last year, the United States Department of Agriculture Forest Service reported more than 13,000 wildfires in the northeastern area. These fires burned more than 76,000 acres of forest and grassland. State forestry agencies and volunteer fire departments extinguished the bulk of these fires.

Over 1,060 cities and towns have taken a proactive approach to wildfires by becoming active Fire Adapted Communities. 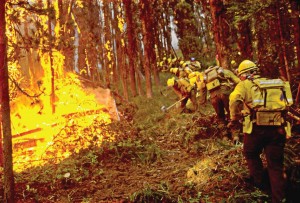 In the United States, the northeast and southeast regions experience
the most wildfires. (Photo provided)

FACs are located in northern states such as Michigan. Wildfires in that state are generally underestimated in regard to number and losses. The Michigan Department of Natural resources estimates that 8,000 to 10,000 occur each year in this state; and while most of these are small burning between 5 and 50 acres — many wildfires exceed 100 acres and some have consumed thousands. In addition, each year 100 to 200 homes and buildings are either lost or damaged due to wildfires. Because most wildfires are caused by human activities, the number of fires and the amount of losses can be reduced if residents take precautions.

Ausable River Estates, a subdivision near St. Helen, Mich., a few miles from 2010’s Meridian wildfire, is the first — and to date, the only — Michigan community to achieve FAC status. It was recognized for the proactive effort following the devastation it witnessed.

A model FAC is typically a subdivision in which residents have recognized that wildfire is a significant risk to their homes, property and safety, and subsequently has made the effort to enact changes that will reduce or prevent the impact of a wildfire. To qualify, its members must complete a community assessment and create an action plan, form a board, hold an annual awareness event and invest a minimum of $2 per capita in a local project. Volunteer hours, equipment use, time contributed by agency fire staff and grant funding can all be included in this annual $2 per capita investment.

In Fond du Lac, Minn., the potential for loss of life and property on a reservation in the event of a catastrophic fire has increased as the number of people living in this wildland urban interface has risen. Maynard, Ohio, has the benefit of being served by a very proactive fire department. In August 2004, the Maynard Fire Department’s chief requested that Ohio Division of Forestry personnel conduct an assessment in the community. Following the assessment, it was determined that Maynard would benefit tremendously from a community-wide wildfire awareness and safety campaign. Local firefighters visited 95 houses situated in the areas of highest concern within Maynard’s response area. To date, over $2,600 has been dedicated towards FAC efforts in Maynard.

On a larger scale, the Fire Adapted Communities effort encourages the various players in a municipality, like fire, local officials, land managers, residents, planners and insurance agencies, to talk with each other about the threat and find common paths forward. nfpa manages this national-level program with the usfs, said Deaton.