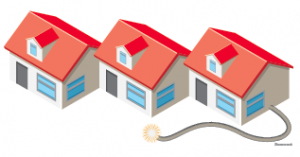 Rarely does any city plan for the failure of a common-interest housing development. But it does happen — especially during a recession — and municipalities can suddenly find themselves with a mess.

There’s no denying the appeal of Common-Interest Developments. Local government reaps the benefit of an increased tax base without added responsibility for infrastructure and services: something particularly welcome in newly developed sections of rural areas, where government is small.

CIDs take the form of condominiums, vacation timeshares, retirement communities and individually owned units like villas, and are usually a boon to local government. But during the recession a few of them became expensive liabilities.

CIDs exploded in the ’70s and ’80s. According to HOATown.com, 62 million Americans now live in CID communities governed by homeowner associations. Residents in those dwellings pony up for what amounts to private government in exchange for privatized services and regular repair, replacement or updating of shared resources.

In the 1990s and 2000s the rapid growth of CIDs ebbed, however. Professor Evan McKenzie of the University of Chicago Political Science Department has looked into that adjustment.

“We had massive overbuilding between 1996 and 2006–07, and that was due to the escalation of prices and easy lending practices,” he said. “Developers were able to sell those houses very profitably. But when prices started going down, at that point there was still an oversupply.”

That oversupply created something of a shadow inventory. Maybe 24 percent of CID housing units in the county were underwater during the recession, McKenzie estimated, and it isn’t likely that those prices will rebound immediately.

HOAs are self-funded, staffed and operated, and have real powers that most residents don’t even realize that they’ve handed over. Homeowners are on the hook first when these developments find themselves in financial distress, something that’s happening with increasing frequency.

When CIDs turn 30 years old, they land on a sort of obsolescence watch; they start to see the failure of major components: roofs, retention ponds, lights and streets. Most associations don’t have enough money in reserve to cover this number of major projects, McKenzie said.

Fannie Mae and some private mortgage lenders have become concerned enough about the problem that they’ve changed their standards for properties in HOAs and condo associations. Instead of just rating the unit in which a buyer wants to invest, lenders are requiring data about the historic solvency of the whole association. Banks are tougher these days on developers too, making it less likely than before that a financially shaky developer will get the loans he needs to begin construction in the first place.

But during the recession, and even before it hit, broke CID homeowners had begun to walk away from properties on which they couldn’t pay additional assessments. In a survey conducted in 2011 by the Community Associations Institute, Falls Church, Va., 46 percent of HOA residents said the mortgage foreclosure crises had seriously impacted their association. Fifty percent of those had increased assessments as a result. From 2005–10 delinquency rates among HOA residents more than doubled, topping out at more than 5 percent in 65 percent of HOAs — up from 19 percent in 2005. Associations across the country are more aggressively collecting dues and assessments and even battling banks for foreclosed mortgages in order to recoup losses, as happened with the “mortgage terminator” law in Florida in 2010.

Because of the fact that supposedly it can get all the money needed for maintenance from homeowners, few HOAs actually go bankrupt. In a some cases, however, they, too, have walked away. The result is cities and towns left with a CID in need of services and infrastructure repairs.

In the 1990s, the company developing Franklin Park Villas in California failed. The city redeveloped it under eminent domain. More recently, in 2007, Newman Homes walked away from 15 unfinished developments. With no one left to plow the snow, the village of Antioch, Ill., had to take over.

The majority of CIDs that fail do so before the development is actually turned over to the HOA, though. The builder or developer goes under, leaving the city and early buyers on the hook for an incomplete project. Sometimes another developer is willing to complete the project, but McKenzie advises screening applicants in this high-fraud industry carefully.

Attorney Patrick Costello, Wheaton, Ill., recommends discernment when it comes to working with a CID. He recommends setting up a dormant special service area and bringing it into action only if the HOA fails or a point of contention arises.

“It’s sort a sword that you can wave around: If you don’t start taking care of this, then we will.” This sort of action has to be taken during the planning stages of the development, however.

Letters of credit from the developer have also proven effective. Frank Rathbun of the CAI suggested that cities or counties approached by CID developers vet them by looking at the number of homes currently in foreclosure in other developments by the same company.