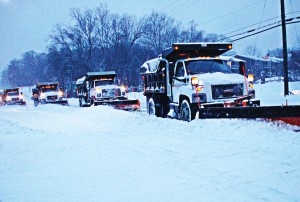 Not only did winter come early this year, it came with a vengeance. Vienna, Va., was among the cities that ran out of salt and exceeded their budgets for the season. For 2014–15 Vienna will seek to add a road pre-treatment to its winter arsenal and for more CDL truck drivers to be trained in order to increase efficiency during severe weather. (Photo provided)

Nothing brings the South to a standstill like snow and ice. This winter, multiple, merciless rounds of both took Georgia, the Carolinas and their neighbors from a scene out of “Sweet Home Alabama” to something more akin to “The Day After Tomorrow” in just hours.

Two days after the second February storm went through, a National Weather Service civil emergency message was still in effect in South Carolina. Downed power lines, fallen trees and extremely cold temperatures were so widespread in the region that Governor Nikki Haley declared a level three state of emergency.

In Cleveland, Ga., one backhoe, a tractor and a truck with a plow attachment cleared 27 miles of secondary roads. But only one power line came down in Cleveland, and even though the volunteer fire department manned itself 24/7, only a few calls came in.

At nearby Truett-McConnell College, though, one of those emergency calls was almost tragic. Presumably excited by the opportunity for sledding, four students were injured Feb. 12 — two seriously — when their makeshift sled slammed into a power pole.

Director John Hunt of the Cullman, Ala. Parks and Recreation Department said his town fared pretty well during the highly uncommon season.

“The weather did hurt us a little, but by this time of year, we’re usually into our indoor sports anyway,” he said. Many Cullman parks and recreation personnel live within walking distance of their jobs and took advantage of that fact when the roads weren’t safe for driving.

Cullman’s biggest winter-related problem might be on the city-owned golf course and athletic fields. Hopefully, the greens will start to grow again as normal this spring; but if this round turns out to have gone to the weather, then they’ll have to be replaced.

To give the many residents who heeded warnings to stay home something to do, the department cranked out a social media contest for building the best snowman.

“We got tons of response,” Hunt said. 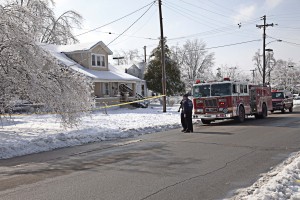 “It used to be you’d get calls complaining, ‘Why is the power company out here massacring my trees?’ Now we see what happens when they don’t,” said Lake City, S.C., Mayor Lovith Anderson Jr. Changes to the region’s energy provider resulted in local limbs not being trimmed back as much as before, and a large number of them came down on power lines during February. (John Penezic / Shutterstock.com)

Weather-related expenditures weighed on the budgeting process in in Vienna, Va. By Valentine’s Day the D.C.-area municipality had used up its entire stock of sand and road salt — including replenishment that was delivered during the season — and was reduced to sanding. It also joined the soup line of cities that had exceeded their 2013–14 winter weather budgets.

Vienna experienced no particular operational issues or problems associated with preparation and response, Public Information Officer Kirstyn Barr said. But the city will try to improve efficiencies by training more CDL truck drivers to increase flexibility with staffing, and will look at adding the capability for pre-treatment.

Cleveland is also looking at overtime bills. It’s biggest winter-related expense will likely be the replacement of a few pieces of equipment, though.

“Just because of the wear and tear, from running them on the snow and ice,” clerk Connie Tracas reported. Many of its aged water lines were recently replaced, which is likely why only one of them burst.

Mayor Don Stanley expects equipment and overtime costs will eat into the overage built in to each year’s budget, but has no plans to make snow and ice response a significantly larger part of the 2015 budget.

“I can’t see any wholesale shift in how we plan for these sorts of events,” he said. “It’s a rare occurrence, so are you going to change procedures and preparations as a result?

Weather patterns change, Mayor Lovith Anderson Jr., of Lake City, S.C., believes. He isn’t so sure this winter season was an anomaly. 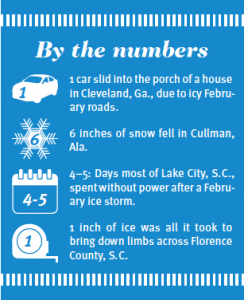 Ninety percent of Lake City went days without power after the second storm coated limbs with over an inch of ice, bringing an abundance of firewood down on power lines.

“Our public works department took the hardest hit. We had everyone out there picking up anything that was obstructing traffic … besides the power outages, we had water pumps and sewer systems not work, so we switched to diesel backup then we had that bill.”

Even though the city is financially sound, Anderson said, there will be some juggling. Fortunately, Lake City is a good candidate to receive reimbursement from the Federal Emergency Management Agency for public works, police and other emergency response personnel overtime, and for emergency water and sewer repairs. Next year he expects to have to reassign line items within the general fund budget to cover future snow and ice events.

“It seems to me we’re going through a different cycle … As it changes, we’re going to have to change with it.”