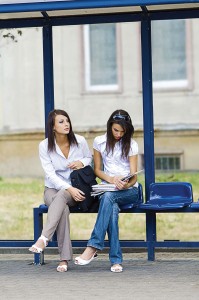 Portage Area Regional Transit Authority combined public and private investment to create a public transportation plan in Kent, Ohio, that would contribute to the development of the city’s downtown and encourage graduating college students to settle in the area. (Shutterstock photo)

Public transportation played a critical role in expanding America. Once upon a time the stagecoach helped people go from point A to point B, followed by rail lines, trolley services, bus routes, subways, “El” trains and airplanes. However, as the automobile became the choice mode of getting around in the post-World War II era, public transportation opportunities were often relegated to bigger cities with larger populations rather than small towns or rural areas.

But according to a 2012 report published by Reconnecting America, smaller communities have discovered the benefits of developing mass transit options that connect residents to jobs and other resources within the local community. Public transportation investments are being used to address the challenges of limited resources, populations both shrinking and growing older, industrial decline and the loss of farmland. Through strong partnerships and creative funding mechanisms, the initiative is creating stronger, healthier communities.

Located 40 miles from the city of Boston, Fitchburg, Mass., is among the bedroom communities that benefit from having a mass transit system in place. The area is served by the Montachusett Regional Transit Authority, which includes fixed-route bus and regional van service as well as a commuter rail system operated by the Massachusetts Bay Transportation Authority.

Mohammad Khan, mart administrator, said Fitchburg has been very fortunate to have a commuter rail line in the area.

“Our congressman, John Oliver, was able to help us get $300 million to improve the line. While we are working to trim our Boston commute times from 90 minutes to 60 minutes, its presence has inspired serious economic growth in the area.”

Khan added the commuter line has had a direct impact on local industries, including Bristol Meyers/Squibb, Cisco and IBM, which are able to attract an experienced workforce from the Boston area. It has also encouraged families to settle in an area that enjoys a lower cost of living compared to a larger community.

“Right now we are trying to strengthen our reverse commute so that people will see Fitchburg as a destination area as well,” he said.

Integrating a mass transit system is important for any community, but it’s often a hard sell. Aside from the people who need transportation options due to mobility challenges or economic need, Khan said municipalities need to do more to educate the public and help them see mass transit as an everyday choice.

“People worry that it is not reliable; that it’s inconvenient; and they lack understanding about public transportation,” he said. “If they are properly educated, then they will realize that it is a reliable choice, and environmentally responsible choice and can save them money as well. When they get used to it, they love it.” 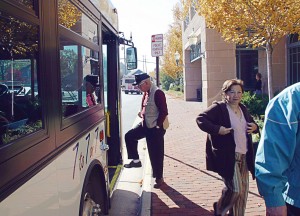 Public transportation investments are being used to address the challenges of limited resources, populations both shrinking and growing older, industrial decline and the loss of farmland. Through strong partnerships and creative funding mechanisms, the initiative is creating stronger, healthier communities. (Photo provided)

Kent, Ohio, is similar to a lot of college communities that have fought the battle of the brain drain. Located in the northeastern portion of the state and home to famed Kent State University, Kent has a high turnover rate of students who come to receive an education and then leave as soon as the ink dries on their diplomas.

In 2008 the city was determined to find out why. Civic leaders conducted a study among the student population to determine what it would take to make them stay. The answer was overwhelming. Young people wanted to live near a thriving downtown community with plenty of cultural attractions, dining and retail options, gathering spaces, walkable streets and interesting neighborhoods.

The findings were used by the Portage Area Regional Transit Authority to create a proposed transit center, the Kent Gateway Center that would promote intermodal transportation use and revitalize their downtown area.

“It used to be really bad,” said Bryan Smith, director of planning for parta. “Businesses would roll up the sidewalks at five o’clock, and the only places that had anything going on over the weekends were the bars.”

The city was awarded a $20 million dollar grant to begin the project that ultimately beget over $100 million in private and public investments. Smith noted that in addition to parta’s large parking deck and 10-bay transit/transfer center, two developers have put in retail and office space, plus a large boutique-style hotel has been built to accommodate visitors to the university. Their partners have been able to create an esplanade with walking and hiking trails that connects Kent’s downtown district with the campus community.

“We didn’t have that before. In the 1970s, a limited access freeway divided the area, and that was a problem,” Smith said. “In order to get from the campus to the downtown area, students had to take a circuitous route, which wasn’t very welcoming. Now we have racks on our buses, plenty of walking trails, hotel rooms for visitors and other amenities to say ‘We want you here!’”

Smith said the project is 98 percent complete and has succeeded thanks to the single-minded vision of the various partners, including the city of Kent, parta, Kent State University and the U.S. Department of Transportation.

“The Kent Central Gateway has been very successful already, and I guess the old adage is true: If you build it, they will come,” Smith said.