They are the communities that spark imaginations and serve as a backdrop to the stories that shape readers’ lives. One minute they’re no different than any other small town: Then, seemingly overnight, they become iconic boomtowns of tourism, thanks to literary legend.

Instant name recognition
George Walley, executive director of the Northeast Missouri Economic Development Council, said when a community finds itself at the epicenter of classic literature or a best-selling novel, it creates a marketing coup that money can’t buy.

“There’s instant name recognition between the town and the book it’s associated with. Communities have to decide how they’re going to deal with this newfound fame,” he said. “Will they embrace it and find the best way to control its growth, or will they let it run wild and turn the town into a circus atmosphere?” 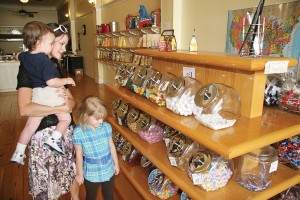 Paddlewheel Popcorn shop in downtown Hannibal, Mo., has a map on the wall full of pins representing the many places from where visitors have come to experience the setting for Tom Sawyer’s and Huckleberry Finn’s adventures. (Photo provided by Hannibal CVB)

Walley grew up in Hannibal, Mo., so he knows a little something about how a book can impact a community. The city has a thriving manufacturing and agricultural industry, but people know it as the boyhood home of Mark Twain and the setting of the fictional St. Petersburg featured in “The Adventures of Tom Sawyer.”

According to Gail Bryant, director of the Hannibal Convention and Visitor’s Bureau, approximately 500,000 guests descend on the city annually to see Mark Twain’s boyhood home, the riverboat, the cave and all things associated with Tom and Huck.

“Though we have other notable names who were either born here or made part of their lives here, such as the ‘unsinkable’ Molly Brown, I would say 95 percent of the people who visit Hannibal do so because of Mark Twain — even if he isn’t the only entity holding down the economy.” 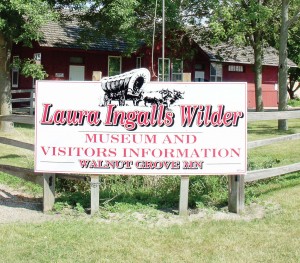 Amy Ankrum, director of the Laura Ingalls Wilder Museum in Walnut Grove, Minn., admits that few people would recognize the name Walnut Grove were it not for Laura Ingalls Wilder. The “Little House on the Prairie” books remain one of the most popular children’s series of all time. It’s no wonder that readers all over the world flock to the Midwest to submerge themselves in the land of Laura.

“People first started coming to Walnut Grove in the 1950s, traipsing through the Gordon farm to see the dugout Charles Ingalls carved out of the ground for the family along the banks of Plum Creek,” Ankrum said. When the books were developed into a television series in 1974, tourism really exploded in the tiny town, which gets about 15,000
visitors each year.

Of course, the Ingalls family not only settled in Walnut Grove but also had connections to Mansfield, Mo.; Pepin, Wis.; and DeSmet, S.D., among others — which resulted in the Laura Ingalls Wilder Historical Highway. It’s a pilgrimage, of sorts, to help Little House fans connect with the various locations made famous in the books and television series.

“Many of us are small communities, so we had to work together to create the Highway 14 brochures and to coordinate pageants and other special events so that they don’t compete with one another,” Ankrum said.

Monopolizing the tourist trade doesn’t pay in these small, seasonal towns that are incapable of sustaining year-round lodging for guests. Visitors to Walnut Grove typically stay 30 minutes outside of town. Sightseeing, except for the annual Laura Ingalls Days Pageant, typically takes a couple of hours. Ankrum said it’s best to let people have a look around, have a bite to eat, pick up their souvenirs and help them get on their way to the next stop on the trip.

“We also coordinate the items we have in our gift shops, so yes — we all get along. It just doesn’t pay to fight about it,” she said. 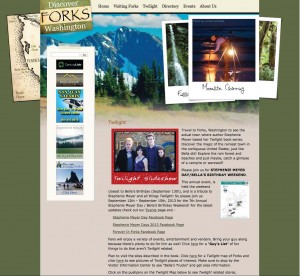 Although the popularity of the “Twilight” series caught Forks, Wash., by surprise, the city is now a model for how to turn literary fame into tourism revenue. Forks’ website directly facilitates readers’ interest.

While Walnut Grove and Hannibal have had plenty of time to get used to their place in literary history, other communities struggle with their new-found fame.

Forks, Wash., population 3,532, became the recipient of unexpected notoriety when it was featured in Stephenie Meyer’s best-selling series “Twilight.” Tourists began to flock to the city in 2006 looking for all things Edward, Bella and Jacob. By the time the first movie was released in 2008, tourism had jumped to 19,000 annually, up from an average of 10,000 in the pre-”Twilight” era. By 2010 approximately 73,000 visitors were descending on the community.

Although those numbers have dropped off in the past couple of years, the fact that Forks is now synonymous with a book creates unforeseen challenges. When the Quillayute Valley School District made plans to remove the old Forks High School facade and its wooden sign, they wondered what the impact would be to visitors who expect to see those popular landmarks from the books. In the end the sign was preserved — but only portions of the façade remain and are stored inside the school.

“Communities have to work hard in order to preserve the things that matter to readers, and it isn’t always easy. Even we nearly got it wrong a couple of times,” said Walley. “At one point there were plans to demolish Twain’s boyhood home, until someone stepped up to preserve it. Still, even if something terrible happened and the home burned to the ground, something tells me people would show up to stare at the hole left behind.”