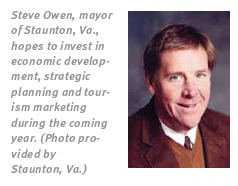 The new year brings dreams of hopes, challenges and priorities. Many cities are working on major projects, and all are trying to make due with the budgets that they have to work with.

“We need to expand our local tax base and help create good jobs, bring in more tourists and have a plan in place to deal with the retirement of several department heads,” Owen stated.

“No department heads are on a deadline for retirement; we simply know when they might retire based on their eligibility under the Virginia Retirement System. I expect I’ll have three department heads retire in 2014,” said Owen. He also hopes to invest in strategic planning.

Staunton is facing budget issues in 2014, ones that are common for a city of its size.

“The economic development and tourism departments will be given priority over other competing priorities in the budget process so that they have the resources they need to successfully market the city,” said Owen.

The city of Staunton, Va., is focusing on several issues in 2014. Economic development and tourism top the list. (Photo provided by Warren Faught)

Dan Groth, administrator for Independence City, Ky., said his top three priorities for 2014 are continued controlled economic development and growth; maintaining the industrial base while expanding the city’s commercial base; completing the designation of a courthouse square area as a historical district; and securing grants for a Memorial Park master plan to install basketball courts, restrooms, and dressing and storage rooms in the city’s amphitheater.

“Our main goal is to maintain excellent services to our residents, businesses and industries in 2014 without raising taxes. We were able to keep the same tax rates as the 2013 rates,” Groth noted, in part because the municipality is among the fastest growing communities in the U.S.

“Originally, we budgeted our medical and health insurance costs increasing to about 40 percent; however, it increased less than 3 percent. Also, our previous payroll taxes came in more than we expected and economic growth is steadily increasing.”

Groth said Radcliff’s population increased “tremendously” from 2002 through 2008. Then the economy took a nosedive. However, it is 24 square miles and has a reputation as an affordable bedroom community. Its rural nature and the city’s location only minutes from downtown Cincinnati has again prompted an uptick in the number of new homes being built.

Recently, a new Kroger Marketplace Store was completed — currently the largest in the tri-state area at 123,000 square feet. At the old Kroger store, there remains approximately 24,000 square feet for commercial development, and the city also has a new medical building under construction consisting of 12,000 square feet with an expansion possibility of an additional 4,000 square feet, all located in a newly re-zoned area called the Gateway Zone.

“We’re focused on these goals because I want Radcliff to be known as the premier city in Hardin County, Ky., where people want to visit, work or live,” said Mayor J.J. Duvall.

In 2014 Radcliffe is looking forward to more streetscape projects to beautify the city. Administrators are also looking forward to the beginning of construction on the new Radcliff Veterans Center, which will provide long-term care facilities for Kentucky’s veterans, offering a broad range of versatile nursing care.

“The city of Radcliff is proud of the budget we’ve adopted because we’ve been able to maintain our current tax rates while keeping the services to our community the same. Our budget cycle is from July to June, so when we begin our budget process in February we will look at making our fiscal year 2014–15 budget as fiscally sound and responsible as our fiscal year 2013–14 budget,” Duvall said. Attracting retail and small manufacturing is the goal of Mayor Janice Cagle of Soddy-Daisy, Tenn., a locale of 12,715 residents.

“In Soddy-Daisy, we are working on attracting and recruiting more retail as well as smaller manufacturing facilities that are more technical,” she said.