National parks are the treasure of the American landscape. With over 400 locations covering 84 million acres across the United States and its territories, national parks inspire nearly 279 million visitors annually with their history, beauty, amenities and unique educational opportunities. In addition, they support 252,000 jobs — including 22,000 of their own full-time, part-time and seasonal professionals — and generate approximately $31 billion in economic activity.

It’s no surprise then that when the National Park Service was required by the sequestration to slash $153.4 million from its budget, it would be a measure that would reach far beyond park borders and into neighboring municipalities.

“National parks serve as anchors for our nation’s economy,” said Secretary of the Interior Ken Salazar. “People who visit parks need transportation, places to stay and meals to eat — all of which support businesses and provide jobs in local communities.” 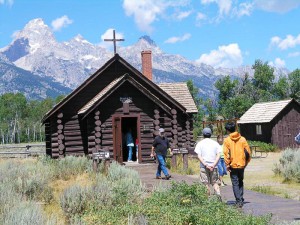 According to Jeffery Olson, public information officer for the National Park Service, the nation’s parks are not unlike small municipalities. They have their own utilities, waste management systems, water treatment facilities, roads, houses and other buildings that have to be maintained. He said that when it comes to choosing where to cut, even the smallest slice can affect tens of thousands of guests.

“This year the budget cuts have had the effects we forecast,” he said. “There were fewer employees to serve the public, which resulted in longer lines at entry stations — especially in bigger parks such as Grand Canyon National Park. We don’t take out the trash as often as we have in the past. We don’t cut the grass as much. Many visitor centers opened later in the season and have shorter hours of operation. Some park visitor centers didn’t open at all this year.”

When hours and amenities are curtailed, it doesn’t take long for tourists to tire and cut their vacations short. When that happens, neighboring towns and cities feel the pinch as well. In February the National Park Service released a peer-reviewed study that showed the connection between park tourism and the nearby communities, and how the parks continue to be critical economic engines for these areas.

The study noted that one-third of total park tourism spending, or about $13 billion, went directly into communities within 60 miles of a park. The bulk of that money, 63 percent, is spent on lodging, food and beverage service; followed by recreation and entertainment (17 percent); other retail (11 percent); transportation and fuel (7 percent); and wholesale and manufacturing (2 percent).

From the redwood forest

Although parks have tried to take the bulk of their cuts on the shoulders of the season, in order to be in good shape during peak tourism months, communities realize that delaying the opening day or closing early can have a big impact on the bottom line.

When idle snowplows threatened to delay the opening of Yellowstone by two weeks this spring, the chambers of commerce in Cody and Jackson Hole, Wy., raised $170,000 to clear the roads. Local business owners who live and die by the tourism market said that the delay could have cost as much as $100,000. It was not a loss they were willing to absorb. 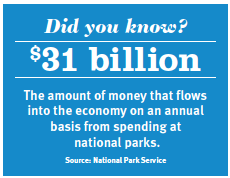 Other communities, friends groups and organizations have also stepped up to the plate to bail out the national parks, which they feel provide an immeasurable benefit to their communities as well as to the entire nation. However, many of them suggested that the bailout was a one-time thing and not something they can afford to do on a regular basis.

“If Congress passes a continuum, as I suspect it will, then the cuts will remain in place. We will still have jobs that won’t get done, positions that will remain vacant and fewer funds on which to run the parks next year,” said Olson. “It makes you wonder if these communities really mean what they say or if they would be willing to lend a hand again. We have done what we can to protect summer vacation and provide the best possible experience for our guests, but it’s hard to keep that up long term.”

Jarvis agrees. In his testimony to Congress July 25 he said sequestration was designed to be inflexible and damaging, and that it undermines the work needing to be done.

“Funding cuts that were imposed midyear… are not sustainable. These actions, which are eroding our workforce, shrinking our summer field season and deferring important work cannot be continued in future years without further severe consequences to our mission.”