When people think about “stopping distance,” they usually picture a vehicle skidding to a stop in a haze of blue smoke. But bringing a vehicle to a stop is a more complicated process than you think.

The first step occurs when a driver perceives a hazard in the roadway. Not only must we see this hazard, but our minds must recognize that the approaching situation is a potential problem. A driver who sees a tractor trailer crossing the roadway may immediately realize it’s a potential hazard and begin the braking process; however, if a small child is running across a lawn, the driver may not immediately recognize that this child could suddenly change course and run into the street. In this situation, the driver will likely continue at his current speed and not begin the braking process until it’s too late. For this reason, emergency vehicle drivers must constantly scan the road ahead of them and always be alert for potential problems. 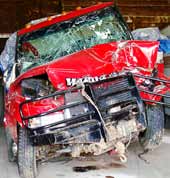 The distance needed for a vehicle to come to a stop depends on several factors, including the vehicle’s original speed, road conditions and the efficiency of the braking system. Consider all of them carefully each and every time you get behind the wheel. (Photo provided by National Institute for Occupational Safety and Health)

Factors such as fog, rain, snow or smoke can obscure a driver’s view of the road and contribute to delayed perception times. There are numerous examples of fire apparatus crashes occurring on smoke-filled streets. When approaching fire scenes where the roadway is obscured by smoke, drivers must be extra cautious of possible hazards that they cannot see. Drivers also must moderate their driving habits in the event of bad weather. Slow down: What you can’t see may kill you!

The amount of ambient light may also affect a driver’s ability to perceive a hazard in the roadway. The common belief is that it is harder to see down the road at night or at dusk. In reality, this is not always the case. The issue is not necessarily how much light is available, but rather more complicated factors such as the contrast of what lies in the road ahead. For example, a road sign may be perceived faster at night than during the daytime due to its reflective properties. On the other hand, a pedestrian who blends in with the surrounding environment may not be perceived until it is too late to stop. The lesson to be learned is that drivers must slow down at night!

After a driver perceives a hazard ahead, he must decide how to react. He could slow down, brake, speed up or attempt to steer around the hazard. No matter what the driver decides it will involve sending signals from his brain to his hands or feet. Once his hands and feet receive these signals, his muscles will need time to react. The time it takes for the body to send signals to the appropriate muscles and begin the evasive action is what’s known as “reaction time.”

Average perception and reaction time is around 1.5 seconds for a sober driver in daylight conditions. The amount of time needed can increase during poor weather conditions, at night, or when a driver is impaired by drugs or alcohol. The more time it takes to react, the longer the total stopping distance will be. On an average day, 1.5 seconds will have gone by before you’ve even touched the brake pedal.

Once a driver perceives a hazard in the roadway and decides how to react, additional time is needed for the vehicle to respond. Let’s say the driver decides to press down on the brake pedal in an attempt to bring the vehicle to a stop. In a vehicle equipped with hydraulic brakes or air brakes, it takes time for the brakes to engage. Whether it’s hydraulic fluid flowing from the master cylinder or air flowing to the brake chambers, it takes time for the braking process to begin. All the while the vehicle is hurtling towards the hazard. It should be noted that air brakes typically take more time than hydraulic brakes to fully engage. In a commercial vehicle or fire truck, stopping distances will be longer due to the additional time it takes for air to travel through the air lines, enter the brake chambers and begin the braking process.

The distance needed for a vehicle to come to a stop depends on several factors, including the vehicle’s original speed, road conditions and the efficiency of the braking system

Once the brakes have engaged, the vehicle will initiate the braking process. Depending on whether or not your vehicle is equipped with an anti-lock brake system, the wheels may or may not lock up and begin to skid. The distance needed for a vehicle to come to a stop depends on several factors, including the vehicle’s original speed, road conditions and the efficiency of the braking system.

As you can see, the concept of total stopping distance is more complex than just a set of skidding tires. It includes the time needed to perceive and react to a hazard, the time it takes for a vehicle’s mechanical parts to engage and finally the distance needed for the vehicle to skid or come to a stop. For these reasons, apparatus drivers must strive to avoid distractions and maintain a heightened sense of alertness. By maintaining a safe speed, drivers will allow themselves the time needed to see and react to an approaching hazard. In my next article, I will explore these concepts in more detail.