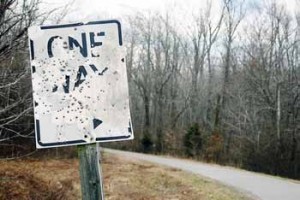 Signs like this one will have to be put out of commission when the second deadline for the federal retroreflectivity requirements
comes in 2015. (Photo by Mike Haley, tapco)

Across the nation, municipalities of all shapes and sizes are checking their signs — from hazard signs to stop signs — to make sure they meet new U.S. Department of Transportation Federal Highway Administration retroreflectivity requirements, which went into effect in January 2008.

The new requirement has three deadlines. The first, Jan. 22, 2012, required agencies to implement a method for maintaining traffic sign retroreflectivity at or above the minimum levels. Currently, public works and street department officials are trying to meet the second deadline, Jan. 14, 2014, which will require them to replace non-compliant regulatory, warning and ground-mounted guide signs identified by the implement sign management program. The final deadline is not until Jan. 22, 2018, and will require agencies to replace non-compliant overhead guide signs and street name signs.

These new regulations are meant to improve the safety of drivers by increasing the visibility of signs during nighttime and other times that lessen visibility. But the requirement is causing some stress for municipalities already trying to make the most out of their limited budgets.

“The main challenge municipalities face is lack of funds and manpower. These two go hand in hand,” said Joanne Conrad, digital division manager with tapco. “Another hurdle is the proper training for visual nighttime inspections set forth in the 2009 mutcd.”

“Most of the municipalities I deal with are using a combination of assessment and management methods,” Conrad said. “The visual nighttime inspection using consistent parameters and expected sign life are by far the most widely used. These are validated by the use of a handheld retroreflectometer. The blanket replacement with spot measured reflectivity checks of a control group seems to be the option when there are no budget restrictions.”

“The city has gone through a blanket replacement over the last few years to replace all old and faded signs,” said Alan Done, traffic operations manager with the city of Palm Bay, Fla. According to Done, the greatest challenges posed to the city by the new standards have been funding and personnel, but to help out he stated, “The city has purchased the equipment and software to take retroreflectivity readings and inventory the signs and is moving forward in collecting the data.”

States away, in Arkansas, the smaller city of Russellville is also using a form of blanket replacement, where it replaces signs as they need it on a set budget determined by the city council. “We make all the street signs including speed limit signs, park signs and construction site signs. We haven’t had many (signs) that we couldn’t make,” Traffic Manager Kenneth Duvall stated. As for the materials they use, Duvall noted the city tries to procure high quality products and has been using high-intensity VIP sheeting, which meets federal requirements. 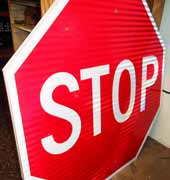 Russellville, Ark., makes all its own signs using high-quality sheeting that is high intensity. Pictured is a newly made stop sign that is compliant with new federal requirements. (Photo provided by Kenneth Duvall, Russellville, Ark.)

“We have a local high school that wanted a project,” said Duvall, who joked he was quick to give them one. “They are going around the city and inventorying each sign; if a sign is not in good shape, they make a note of it. Everything will then go into GIS.” The GIS will then show what each sign is and where it is located.

The GIS information will then be used to help with maintenance by highlighting sections where work is most needed. “It will keep me more busy,” Duvall said.

No matter what methods municipalities apply, Conrad stated, “Proper record keeping is very important. If a municipality does not keep proper records and they do no have proper training or a management method that works for their agency, they may be replacing signs that are within the minimums.

“Most municipalities have some sort of record keeping for signs in the field,” Conrad added. “A random sample of municipalities show different processes from the most simple Excel spreadsheet to the most sophisticated GIS software systems to contracting with an outside consultant to do the job. Some are only inventorying ‘stops’ and ‘yields’ while others have the resources and time to create data record of all signs. The use of handheld retroreflectometer, GPS, barcode reader and user-friendly inventory software is the most comprehensive form of tracking that can be used.”

As for the switch, Conrad stated, “Large or small is not the issue. It is available funds to get the job done. There are wealthy small communities that have funds to replace all their existing signs. There are large cities that are so strapped for cash it takes a few years to evaluate and replace signs. The main issue is being educated on the subject that enables the municipality to make a decision on how to go about meeting the reflectivity requirements in a timely manner and within a budget.”