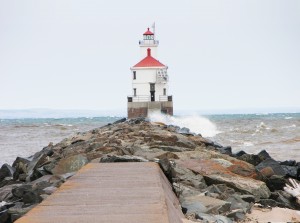 Lighthouses have long been a popular subject for artists, clothing designers, poets and others. Few people give thought, however, to what it takes to run them and what the unique challenges are — especially when they’re conveniently combined with a national, state or municipal park.

As keepers of lighthouse parks have found, the key to maintaining the structures and grounds is the effort of park personnel, special interest groups and dedicated volunteers.

“Probably the biggest disparity between this and another type of park is that as caretakers, we live on the property. Also, the majority of our time is spent working outside on the grounds. We have numerous flower beds, plus over 4 acres of grass that need to be cut. Since the light is automatically controlled, there’s no reason for us to go up the tower on a regular basis.”

The campus includes a part-time police department; Village Hall; the tower; Foghorn Museum; and two storage sheds. The Johnson Foundation Conference Center, municipal court administrative offices and the public works garage are located about half a mile away.

The park’s funding is provided by the village of Wind Point, according to Village Administrator Barbara Grant.

“There’s no effect from the sequestration because the village is a local municipality; (the park) does not receive federal funding for maintenance, buildings and grounds,” said Grant. “We own the village and property and care for it with local levy funds and any charitable contributions. The light itself is owned and operated by the U.S. Coast Guard.

“Our struggle is with the state limiting our levy. Any funds for roads, court streets and the general operation of the village cannot grow, and the lighthouse funding is therefore constrained in that way.”

The village recently renovated the front entrance to Village Hall and the police department to make it more accessible. Currently, there is no space to add more offices or departments at the lighthouse and no remodeling plans as of right now.

“Every once in a while we have issues with the public bathrooms being messed with and have had supplies stolen. But overall, people are very respectful.”

The couple’s living quarters are in Village Hall, as is the police department.

Originally, the building housed three lighthouse keepers — the head keeper, first assistant and second assistant. On the couple’s days off, they make arrangements to have the property watched if they are going to be away.

“Winters are quiet here, and it is beautiful, especially when it snows,” she said. “We see deer, rabbits, ground squirrels and lots of birds. The first winter we were here, we were working on the second floor, looking out over the backyard. We watched as a young man walked around, laying rose petals in a heart pattern in the snow. About 10 minutes after he finished, another young man led a young woman around, into the middle of the heart and proposed.

“They had no idea we were watching — it was so beautiful to get a glimpse into someone’s special day.” 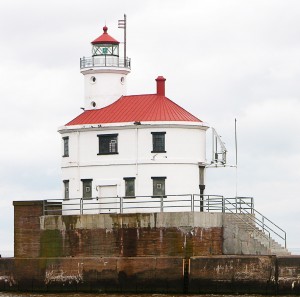 Superior Entry South Light is one of the six lighthouses under the care of the U.S. Coast Guard, said Jeff Murphy, damage controlman second class. “We only take care of the lighthouses, more specifically just the light and the fog horn.”

While none of the lighthouses are part of a park combo, Murphy says his group is currently engaging a contractor to replace the glass in the cupola.

The walk to the Superior lighthouse is treacherous, especially for folks who might have knee problems. But Murphy said that when the building needs repair, he and his crew typically walk anyway, rather than take a boat. 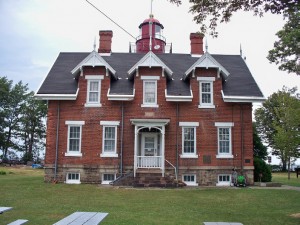 At the privately owned Dunkirk Lighthouse on Lake Erie in New York, a nonprofit organization takes responsibility for maintaining
the structures. (Photo provided)

“The lighthouse is privately owned, and volunteers of a nonprofit organization take care of it,” said Lawson. “The Coast Guard maintains the tower because it’s still an operating light.”

David Briska, treasurer of the Dunkirk Lighthouse board, added that about 3,200 visitors signed the guestbook this past summer. The board is in the process of painting the interior of the house and tower.

“We’ve finished the first floor and the tower, and will be working on the second floor after we replace the roof, repair the chimney, and gutters on the keeper’s house,” said Briska, who is known as “Lighthouse Dave” because he runs the day-to-day business of the lighthouse.

“We’ve completed the repair of the storm windows and the double-hung windows on the first floor. The roof is the next project after an additional $15,000 in grant funding to go with the money already received.”