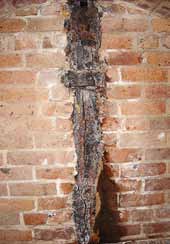 At one time this cast-iron rain leader directed water into a cistern at Fort Zachary Taylor in Key West, Fla. (Photo provided)

Cast-iron pipes leading from the roof of the Fort Zachary Taylor Historic State Park barracks in Key West, Fla., were intended to collect rain water. Over time, however, they also rusted and perpetually dampened the structure’s walls. Digging to repair the ruined pipes was impossible because the pipes are imbedded in the walls’ historic masonry.

First used in the 1970s, cipp is suitable for most municipal pipe repairs and is ideally suited to preserving or restoring historic buildings and sites. When it’s impractical or impossible to dig, when traffic can’t be diverted or a tourist spot can’t afford to be closed to customers, cipp is becoming a popular option. 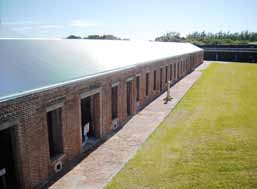 Deteriorated rainwater pipes at the barracks building of Fort Zachary Taylor had dampened the structure’s walls — prompting the search for a repair solution. (Photo provided)

Typically with cipp, a damaged pipe is covered or filled by a felt pipe filled with resin. The liner is then inverted using water or air pressure, before the resin is cured using hot water, UV light or steam. Closed-circuit TV is used to inspect the pipe to insure the job has been successful.

But cipp isn’t suitable to every situation. James Mako, production manager for Engineering Lining Services of Orlando, Fla., said that in an area that is full of water, or where “there is an extremely larger transition … and you don’t have adequate access.” In such situations cipp might be difficult to use: but these situations are rare. 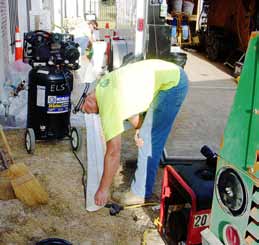 Historic Fairlington Apartment Complex in Arlington, Va., is situated on land George Washington once lived on. The apartments were built during World War II for defense workers and their families. Over the years tree root intrusion at the site had caused the collapse of clay tiles in the sewer system. Sewage backups resulted. With so many tenants and a historic lawn, traditional methods of digging were less than desirable. JED Mechanical Contractors Inc. of Sterling, Va., stepped in to do the work using cipp. The method has been estimated to have saved the Fairlington Village Association a million dollars. 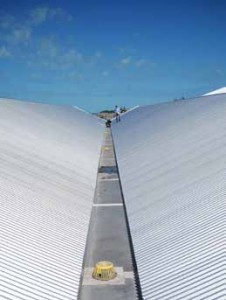 One of the benefits of cipp is its speed. “(cipp) allowed us to repair this critical stormwater culvert quickly and with minimal disruption to the businesses in the area,” said Marvin Williams, public works director of the city of Deland, Fla. “(The traditional method) would have required a complete shutdown down of the road for a minimum of two days,” said Williams.

Since it’s a relatively new technology, there have been concerns about how the resins might affect the water supply. Testing conducted by the Virginia Department of Transportation showed that some cipp installations could potentially cause aquatic toxicity if not carefully and properly installed. Choosing a company that is experienced and conscientious will prevent potential environmental issues down the road.