The opening general session of The Best Show in Public Works was highlighted by the introduction of the 2013–14 American Public Works Association board of directors and its new President, Ed Gottko. In his remarks, Gottko congratulated the public works professionals who participated in the heroic and extensive emergency management efforts of public works crews in the aftermath of Hurricane Sandy on the East Coast, following the Moore, Okla., tornado and during and after flooding that occurred in Alberta, Canada. He also noted much has happened to engineer change in the field of public works and the APWA organization, such as the development and implementation of the Donald C. Stone Center and the public works institutes that offer new educational opportunities and provide resources for members.

Sunday’s keynote speaker, Thomas Friedman, a best-selling author and New York Times columnist, highlighted for attendees his opinions on the engines of change in the U.S., and how globalization has affected everyone — along with how we’ve become a society of “hyper-connectedness.” His speech tracked the explosion of innovation involved in the convergence of three elements — PCs, which allow authority of content in digital format; the emergence of the Internet to send content anywhere in the world; and the new workflow software, which enables individuals to collaborate with others around the world, making it even “flatter.”

On Sunday evening, after the first day of the 2013 Congress, hundreds of attendees, volunteers and exhibitors attended a get-acquainted party at Soldier Field, home of the Chicago Bears. Photos of the event are on Flickr at the APWA 2013 Congress site: http://tinyurl.com/lx23xom. 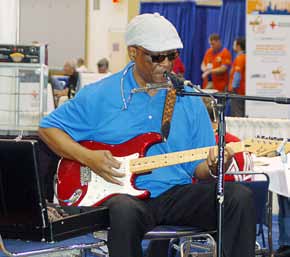