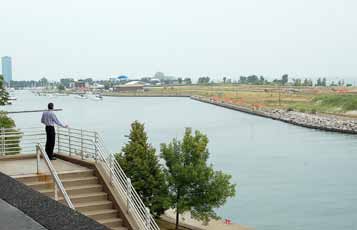 The Chicago, Ill., location, and McCormick Place setting were stunning backdrops for The Best Show in Public Works 2013. From the edge of the skyline, at left, to the public space currently under construction on Northerly Island, attendees had quite a view to enjoy while they ate lunch. (Photo by Jodi Magallanes)

The professionals who keep community center roofs from leaking, build the roads thousands of people take to work every day and who line up with police and firefighters on the front lines of disasters met at McCormick Place, Chicago, Ill., Aug. 25–28. Once there they walked, listened, shared and learned — quite often from each other, and from dozens of federal and state representatives — about what’s working, what’s coming down the road and which issues are going to take some ongoing attention before they can be implemented on the local level.

During the first of two afternoon installments of the annual Public Stormwater Summit, those waters got a little clearer regarding the Environmental Protection Agency’s expected outcomes of the NPDES MS4 regulations as they apply to municipalities. Of particular concern is the cost associated with retrofitting, although according to EPA Municipal Branch Chief Connie Bosma of the Water Permits Division, retrofitting will be minimally required in newly designated and expanded designated areas. 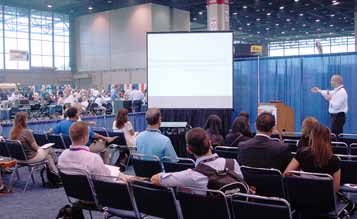 Two “theater” areas on the exposition hall floor at The Best Show in Public Works 2013 were designed to give exhibitors the opportunity
to mount a full-scale presentation of their products and services. Here, managers hear about a solution for low-cost asset management. (Photo by Jodi Magallanes)

A former HR professional, Wakeman said she realized that her open door was interpreted as invitation to drama by subordinates. She quickly learned to “ditch the drama and turn excuses into results.”

“When people come to you they want leadership, not sympathy. What’s more, when people come to you to complain, they are always masking the fact that they could have stepped up to help but didn’t,” she said. “My questions became: ‘What do you know for sure?,’ ‘What did you do to help?’ and ‘Where do we go from here?’” By creating an expectation that employees should be able to adapt to change and overcome obstacles, a manager challenges them and the whole department to greatness, she suggested. “The fact that we live in challenging times is not the source of our pain. The fact that we refuse to adapt to it, that we bury our heads in the sand, is.”

On the floor of the 2013 Expo Experience, hundreds of products exemplified this year’s expo theme, “engineering change.” Manufacturers discussed vehicle specifications with fleet managers who, recession or no recession, just can’t put off new purchases any longer. The Municipal’s sales staff reconnected with people we saw last year in Anaheim, Calif., put faces with the names we’ve been emailing and met dozens of interested municipal managers and directors, both at our booth and during a well-attended hospitality happy hour.

Don’t miss the next APWA Best Show in Public Works congress and exposition, taking place Aug. 17–20, 2014 in Ontario, Canada. If The Municipal didn’t have the pleasure of meeting you in Chicago, we look forward to doing so then.