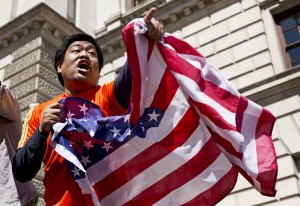 A man waves an American flag in honor of Boston Marathon
victims during the London Marathon, April 21. London and
several U.S. cities slated to hold large outdoor events reverted to
heighten security protocols in the wake of the bombing.
(yampi / Shutterstock.com)

The Boston Marathon is one of New England’s signature sporting events. Held annually since 1987 on Patriot’s Day, the race attracts more than 20,000 participants. Spectators numbering around 500,000 line the city’s streets in hopes of catching a glimpse of history as it passes by.

The 177th Boston Marathon began in typical fashion on April 15. It ended in tragedy, however, when just before 3 p.m. two explosions went off near the finish line as thousands of runners were heading into the home stretch.

“Nobody knew what was going on,” said photographer John Tlumacki, who was covering the event for a local publication. “I can’t compare it to anything else I’ve ever been to.”

President Barack Obama added his commendation of those who showed the grit and compassion synonymous with the American spirit. “You displayed civic duty. You displayed courage…You’ve inspired the entire country,” he said April 18 in remarks made at Cathedral High School in Boston.

The drama continued in the following days. Local, state and federal law enforcement officers locked down the community of Watertown in order to launch a full-scale manhunt for the suspects they believed to be involved in the bombings.

“This was a very serious and dangerous situation,” said Boston Police Commissioner Ed Davis during a press conference after 19-year-old Dzhokar Tsarnaev’s capture. “Thankfully, the man who found the suspect called us right away, did the right thing, got on 911. We were able to come in and take care of the situation.”

The tragedy in Boston serves to underscore the importance of municipalities having an emergency preparedness plan in place for critical situations. The teamwork and cooperation of first responders and law enforcement are a shining example of how to pull together when the going gets tough, and it caused other communities to re-evaluate their own safety and security measures for public events.

Bloomington, Ind., and the Indiana University police departments immediately made plans to beef up security at the Little 500 Bicycle Race slated for the weekend following the Boston Marathon. London, England; Manhattan, N.Y.; and Roanoke, Va., took the time to increase security, create crowd-screening stations and use K9 units at marathons happening in the weeks beyond the Boston incident.

“When something like this occurs, it reminds us to be extra vigilant,” said IU Police Chief Laury Flint.

While stadium sporting events are, by their nature, more controlled, outdoor venues provide unique challenges. In light of the bombings in Boston, Churchill Downs in Louisville, Ky., opted for stricter guidelines on the items spectators were allowed to bring in for the Kentucky Derby.

Personal coolers, which had been removed from the list of banned items in 2009, are no longer permitted in the Churchill Downs infield. Styrofoam coolers and ice were available for purchase inside the venue instead. Camcorders, tripods, video equipment, cans, air horns and other noisemakers were also on the list of prohibited items. All spectators, media and employees were subjected to an electric wand search upon entry to the track.

“Our reassessment of security procedures was prompted by the tragedy in Boston, and it has led to a strengthening of safety practices that we hope will ease any concerns Derby and Oaks fans might have following the events,” said Kevin Flanery, president of Churchill Downs Racetrack. 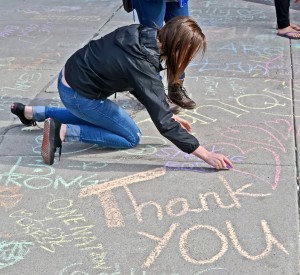 The world took note of how Boston emergency responders reacted to the bombing of the famous marathon April 15.
(fmua / Shutterstock.com)

Challenges remain, especially for public access events such as parades, Super Bowl villages and marathons: venues that are difficult to secure from every potential threat. There is no way to monitor every person and object along a 26-mile course or parade route.

Community officials, law enforcement and event planners say it’s important that the public remain vigilant about reporting any suspicious behavior. But will the public attend events that cannot be properly secured?

Experts seem to think so. Even though there has been a heightened sense of fear and uncertainty in light of the Boston bombings, Gina Ross and Peter Levine believe that people will bounce back when they feel safe again, and that life will go on.

“We as humans, are extremely resilient and have been able to recuperate from the most horrendous of tragedies,” they wrote in their paper “Emotional First Aid.” “Furthermore we have the ability to let ourselves be transformed by our traumas, when we heal them and open ourselves to the possibilities.”