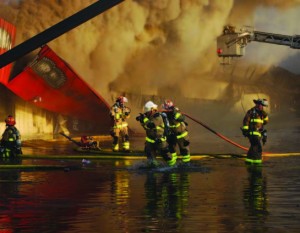 Fire fighting in Columbia, Mo., has come a long way since Chief Albert Newman, his assistant and 11 parttime and volunteer firemen established the first paid department in the city in 1893. In the same way that advances in motorized vehicle technology replaced the horse and ladder wagons of the past, the department remains committed to staying on the cusp of technology in order to offer the highest quality of service to the public.

“We have a lot of exciting things going on right now,” said Battalion Chief and Fire Marshal Brad Fraizer.

In an effort to keep stations properly staffed and ready to respond at all times, fire departments around the country are looking into the distance learning idea. 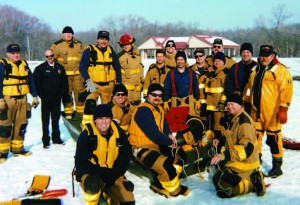 One of the Columbia City, Mo., fire department’s 2013 initiatives is to reduce fire-related deaths and cut down on response time. Budget cuts were making that difficult, but a grant from the U.S. Department of Homeland Security has paid for the addition of five new firefighters. At top, the department battles a two-alarm fire in 2012. Pictured above, the Columbia City, Mo., rescue team practiced an ice rescue this winter. (Photos provided)

“Obviously this will not take away from the training that must be conducted in person. However, when personnel are training at the academy, it means that they are out of territory and unavailable to respond when a call comes in,” Frazier said.

Columbia is also considering the transfer of its paper documents into an electronic database. That system will give trucks immediate access to the materials they need no matter where they are. Frazier said key personnel and each truck have been assigned iPads in an effort to streamline communication and give these members access to the records.

The challenge is scanning and indexing the backlog of paper documents. “It’s a big job that takes a lot of man hours and has to occur during our downtime,” he said. “Going paperless is never easy, but when it’s accomplished, we will archive the paper files for a while until they can be destroyed.”

The third and final element of their strategic goals is continued effort to prevent fire-related deaths and improve department response time.

This initiative is at the forefront of the department’s mission year in and year out. Over the last three years, however, the Columbia Fire Department has had its budget slashed, has seen a reduction in personnel and one station move to a part time operation. All three make the goal more difficult to achieve.

“It poses a change in the level of service we are able to provide the community and it is extremely challenging considering we want to offer the best to our citizens,” Fraizer said. “But we recently received a grant for just under $700,000 through the Department of Homeland Security that will allow us to hire five more personnel, which will help a lot.”

Last year also delivered erratic winter weather in the last few months but drought-like conditions during the summer caused an increase in the number of structural fires the department had to suppress.

“We are constantly looking for ways in which we can help our firefighters combat these situations in the safest way possible and we are always looking at ways to eliminate the hazards they experience on the job whether it is ice, extreme heat or our dedicated personnel overextending themselves.”

Despite having to run an efficient fire department during challenging economic and environmental times for cities and municipalities, the men and women on the Columbia roster have never been more committed to the public. No matter if they are “filling the boot” for the Muscular Dystrophy Association, collecting over a million pounds of food for the local food pantry or serving as a strong presence in the outlying communities, “our men and women work tirelessly for our department and are always willing to serve in their own communities. I couldn’t be more proud of them,” Frazier said.