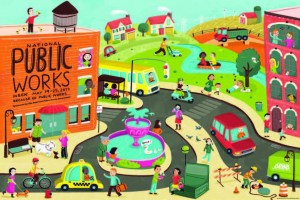 The American Public Works Association selected “Because of Public Works…” as its theme for 2013’s National Public Works Week, which will be celebrated May 19-25. The theme is about the quality of life brought to communities around the world. Artist Jannie Ho shows the many facets of public works in her whimsical and bright illustration. (Photo provided)

National Public Works Week, May 19–25, will be both a celebration of success and a somber review of how much farther U.S. infrastructure improvement and maintenance has to go.

On March 19, the American Society of Civil Engineers gave the U.S. a D+ on its assessment of the nation’s major infrastructure categories, using a typical A-F rating. While 2013’s D+ is an improvement over the last grading period, it leaves plenty of room for improvement.

“It is a grade that is completely unacceptable for the country and one that puts us in a position that does not allow for economic growth,” said Clark Barrineau, manager of statistics for the ASCE.

The U.S. received below average ratings in most of the 16 categories that comprise its overall GPA: aviation, dams, drinking water, energy, hazardous waste, inland waterways, levees, roads, schools, transit and waste-water. Only four of the categories earned grades in the C range: bridges, public parks, ports and railroads. Solid waste was the only category to receive a B-.

“We received a B- in that area because we recycle a ton. But clearly our infrastructure is not meeting the needs of families and businesses in this country,” Barrineau said.

He’s quick to point out that the dismal grade does not mean that lives are at risk. What it means is that a significant investment needs to be made in order for projects to move forward and for the country’s grades to rise. 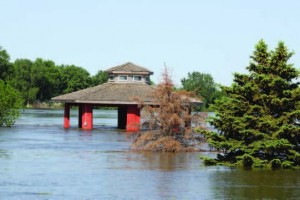 The American Public Works Association will observe National Public Works Week May 19-25. Among notable recent infrastructure projects completed in the U.S. are Iowa’s $19.2 million project to reconstruct the I-680 roadway between Florence, Neb., and Crescent, Iowa. The project allowed the state of Iowa to continue its flood recovery efforts. (Photos courtesy ASCE)

The ASCE’s executive summary states that the U.S. has a “significant backlog of overdue maintenance across our infrastructure systems, a pressing need for modernization, and an immense opportunity to create reliable, long-term funding sources to avoid wiping out our recent gains.” It estimates a need of $3.6 trillion by 2020 in order to get infrastructure up to speed.

“We have roads and infrastructure that were established in the 1950s and ’60s that is no longer in line with the needs of a 21st century economy,” Barrineau said.

Despite the overall bad news, every state reported success stories in important areas. Iowa’s Department of Transportation replaced the U.S. Highway 6 Keg Bridge, built in 1953, using accelerated bridge construction that can shave months, if not years, off the typical bridge building process. Construction time was cut from six months to two weeks of traffic disruption for the public and serves as a model for other states to lessen the time and impact of construction for future projects. 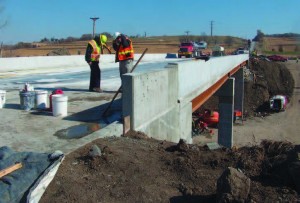 In 2011, Iowa also began work on a $19.2 million project to reconstruct the I-680 roadway between Florence, Neb., and Crescent, Iowa. The ASCE report shows that the project was completed in 34 days thanks to the crews who worked on site for 24 hours each day during the first 10 days, then transitioned to 14- and 16-hour days thereafter. The ASCE said the “project was completed quickly due to a commitment to mitigate the costs of the detour for the closed portion of I-680 and to avoid working during the winter months. The quick turnaround and construction time allowed the state of Iowa to continue its flood recovery efforts and move resources to improve other vital infrastructure.” 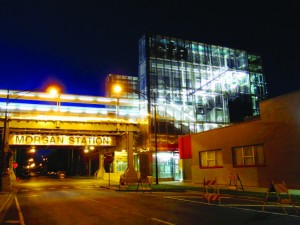 Morgan Station, the first new CTA station in 15 years, opened in the West Loop neighborhood of Chicago, Ill., in 2012. It was designed to ease passenger movement.

In Illinois, the Chicago Department of Transportation and the Chicago Transit authority recently completed a number of renovations to the city’s aging elevated rail system. In the summer of 2012, Morgan Station, the first new CTA station in 15 years, was opened in the West Loop neighborhood and was designed to ease passenger movement. There are also plans for a $425 million reconstruction of the south branch of the Red Line — the city’s primary north-south transit line — as well as a $240 million rehabilitation of the bus/rail terminal at 95th Street, the southern end of the line.

Barrineau said that the lesson to be learned from these success stories and others around the nation is that innovation and leadership breeds success, and when we invest in these areas, good things happen.

“A D to a D+ improvement is not good, but we aren’t going to go to an A overnight,” Barrineau said. “A long-term solution will take time and the commitment of elected officials on both sides of the aisle, but if they take stock and care about these things, we’ll see the changes we need to. We’re doing poorly, but we’re not failing.”