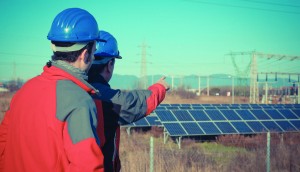 Emergency services in areas that feature a solar energy array or wind farm have to prepare for new eventualities. Planning ahead and working hand-in-hand with the facility’s management are key. (Shutterstock photo)

When a county or city approves construction of a renewable energy plant, chances are it will be built in a rural area served by a volunteer fire department that’s long on valor but short on resources. How can fire departments dealing with green technology in their areas meet the challenge?

“When the company moved in, we were invited to all their meetings,” Ron Buck, chief of the Shelby Volunteer Fire Department in Montana, said. “We know where every thing is; we know how everything was built.”

Throughout the project’s development the Toole County, Montana, Commissoners and emergency services personnel worked with the NaturEner company to develop the Glacier Wind Farms site in Shelby. “They were really forthright with us,” Buck said. “They told us what we could expect and possible dangers.”

As parts were hauled in, the group would meet at designated points in town to see them and hear about how they fit together and operated.

“They want to have a great working relationship with us,” he added. “They invite us out all the time.”

Most companies are more than willing to work with area officials to develop good relations. If that process hasn’t started in your case, get the ball rolling by contacting the project manager to see how the department can help. 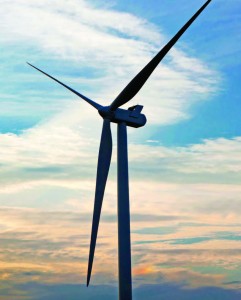 Blue Sky Green Field Wind Energy Center, owned by We Energies, is the largest wind farm in Wisconsin and produces enough energy to power 36,000 homes. With that power comes risks, and the company has chosen to provide its own emergency services to lessen the burden placed on area enforcement. (Photo provided)

Whether through green-tech companies or accredited programs, fire departments located near solar arrays and wind turbines should make education a priority.

According to Dustin Smith, executive director at SolarTAC in Aurora, Colo., a facility specializing in experimental solar technologies, the most important thing to know when dealing with any technology is the type of power associated with the system: Specifically, is it alternating current or direct current?

“AC power is unstable. When you turn on too many lights in your house, you flip the breaker. DC power doesn’t work like that. It just keeps going,” Smith explained. “When you’re talking about a renewable energy site, as long as the sun’s up the power’s being generated. As long as the wind’s up, the power’s being generated. If it’s not covered up, then it is inducing a current. Somebody’s got to know how to turn that off.”

Prepare before it happens

Although there are no wind farms in the Bowling Green Fire Department’s jurisdiction in Kentucky, Fire Chief Stephen Meredith decided to study up. A Google search and a few hours of study provided valuable information.

He learned that falling wind turbines can travel nearly a mile from the site. He learned about turbine fires and the high-angle training needed to perform rescues on them. He then developed a plan in case nearby departments asked for assistance with a turbine fire.

“There’s really not much more you can do about that, because it’s out of your reach,” Meredith explained. Departments without training, and many with, have instead learned to watch and wait.

“(We’ll) establish a perimeter and watch for any brush fires that may start from the turbine setting fire,” Meredith said after doing his research. “It’ll eventually come down to us.”

At We Energies wind farms in Wisconsin, emergency services work with the company to develop safety measures. Technicians from Vestas Wind Systems perform general maintenance and fix problems as they occur. Instead of expecting local emergency services to engage in specialized training, Vestas technicians are trained to do virtually everything.

“Certainly, we’ve coordinated with (emergency services) on information-sharing in terms of where the turbines are,” Brian Manthey, senior communications specialist at We Energies, said. But the company expects local emergencies services primarily to provide flood lights, generators and other rescue gear if needed. We Energies provides funding to departments where their projects are located to acquire the additional supplies.

Other companies ask emergency services to take on more responsibility during emergencies. In conjunction with their local wind energy company, for example, the Shelby Fire Department did opt to train in high-angle rescue. If emergency situations haven’t already been discussed, contact the company’s administration.