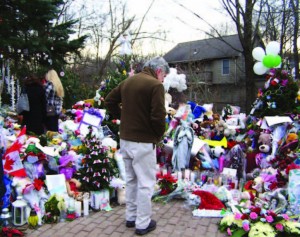 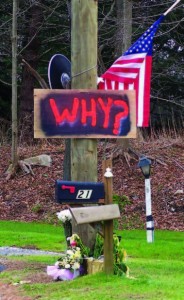 Signs of shock and sadness sprang up instantly across the small New England town and throughout the country for the Newtown victims. (Gina Jacobs/Shutterstock)

On Dec. 13, 2012, Newtown, Conn., was an idyllic and relatively unheard-of New England community. But at 9:30 a.m. the following day, it became synonymous with Aurora, Virginia Tech, Columbine and other scenes of national tragedy after a gunman entered Sandy Hook Elementary School and opened fire, taking 26 lives.

No amount of training could have prepared first responders and authorities for the carnage that awaited them inside the building. Within minutes of the first 911 call, Newtown Police Chief Michael Kehoe was on the scene assessing the damage. What he witnessed in the school left him speechless.

As word of the shooting reached the community, social media outlets and newswires, frantic parents raced to nearby Sandy Hook Fire Station in hopes of being reunited with their children.

First responders and town officials, along with local, state and federal authorities, struggled to peel back the layers of a horrific event that shook the nation to its core and even caused President Obama to shed a tear or two.

“As these days have unfolded, you’ve also inspired us with stories of strength and resolve and sacrifice. We know that when danger arrived in the halls of Sandy Hook Elementary, the school’s staff did not flinch. They did not hesitate,” Obama said during a prayer vigil on Dec. 16.

Among those lauded for their performance under pressure is Connecticut State Police Spokesman Lt. J. Paul Vance, who was given props for his compassionate and straightforward approach in communicating with the media.

First Selectman E. Patricia Llodra was recognized, too. She has been hailed as a steadfast leader during Newtown’s darkest hour.

“I will always carry in my heart and in my mind’s eye the vision of our first responders on that awful day when 26 innocent lives were lost in a violent and senseless attack on Sandy Hook School,” Llodra said in an email interview. “Our local police and volunteer firemen rushed into a dangerous situation with only one thought: to save lives.”

Llodra said that in the small, close-knit community, many of Newtown’s first responders choose to live and raise their families in the area and are part of the town’s social fabric. She noted that these same first responders had children, spouses or other family members in the building when the intruder began the attack; however, they were able to act professionally despite their personal connections in order to protect and defend the community and try to make right the most horrible of situations.

“To see these responders set aside their personal worries to serve us unconditionally is to forever cement in my being a sense of value and respect for them as individuals and for the service they provide,” she said.

In addition, Llodra credits first responders from neighboring communities and across the state that rushed to Newtown’s aid quickly and effectively. She said the mutual aid program among first responders was remarkable and unprecedented in her experience as a municipal leader.

“Newtown will never forget the genuine outpouring of needed and valuable emergency services support from our neighbors and friends across the state. We are forever grateful to them and fully recognize that we could not have managed the aftermath of this horror without them.”

It’s an aftermath that will no doubt have far-reaching affects. While the incident reignited the issue of gun control and caused even President Obama to call for “meaningful action” on the topic, it will be months before an official report will be released on the event. In the meantime, some of those same responders who were heralded for their bravery are suffering from post-traumatic stress disorder due to their inability to “un-see” the horror inside Sandy Hook Elementary.

Though the number of responders critically affected by the tragedy is small, those who are traumatized have used up their sick time, vacation days and have been at risk of losing their paychecks. It’s caused the local American Federation of State, County and Municipal Employees union, Council 15, to request additional support for them.

Lt. George Slinko, a spokesman for the Newtown Police Department said that, in general, the officers are holding up well.

“A couple of them are taking it harder than some of the other ones,” he noted in a statement. “The things that the officers had to experience underscores the need to support them in every way possible.” 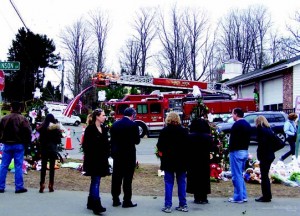 No amount of training could have prepared first responders and authorities for what awaited them Dec. 14 inside Sandy Hook Elementary School. Their neighbors, friends and the AFSCME are trying to help them cope with the aftermath. (Gina Jacobs/Shutterstock)

While the grief will not end soon in Newtown, the community has begun to move on. Students and faculty recently moved into Chalk Hill School, a shuttered building that was quickly refurbished and rechristened Sandy Hook Elementary, at the request of the families.

“That’s who they are,” said Newtown Superintendent of Schools Janet Robinson regarding the decision for the new building to bear the familiar name. “We want to get back to teaching and learning. I think that is going to be the healthiest thing.”