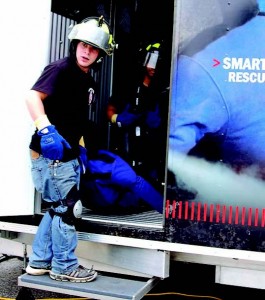 From left, Mitch Latta and Donivon Brummett exit a trailer at FDIC after retrieving their Smartdummy Rescue Manikin from a heavy smoke environment. The high school students attended the 2012 conference in Indianapolis as part of their Firefighting 1 and 2 studies. (Photo by Jodi Magallanes)

In addition to math, English and social studies, some high school students are adding firefighting to their course lists.

At Twin Lakes High School in Monticello, Ind., students come together from seven different schools to enroll in a two-year program and graduate with certification in Firefighting 1 and 2.

“They have to earn the certification through the state. We are preparing them to tackle the test that is ahead of them,” said Bob Braaksma, Monticello’s former fire chief. Braaksma has been teaching the courses for 10 years.

“When we started, we were only the second or third school to do this in Indiana,” he noted. “It’s becoming more common as people who don’t have money for college want to prepare to join the workforce after high school.”

Braaksma has seen many of his students go on to achieve great success and enjoy the advantage of already having certification when applying for jobs. “I have students working as paid volunteers, two have been through the United States Air Force and one graduated from the Fire Academy in Texas as a top gun,” he says.

The program is not only preparing students for the future, it’s also financially beneficial to local communities that are struggling with budget cuts. “Most cities have to train incoming firefighters,” said Braaksma. “But municipalities don’t have to pay for this training when they come out of high school and already have it. We’re funded through federal money.”

The program also relies on donations, especially for equipment. “Our greatest challenge is our lack of equipment and of equipment that’s up-to-date and not beat up or falling apart. We try to borrow what we need,” he added. “The Monticello Fire Department recently donated an old truck, which has been great. I’m always looking for equipment.”

The National Volunteer Fire Council encourages youth participation in training for non-operational events, such as the program at Twin Lakes. According to Kimberly Quiros, director of communications for the organization, the number of volunteer firefighters is decreasing while calls are increasing.

“The volunteer firefighters are an aging population,” she said. “Reaching youth early is key to making sure that volunteer fire service thrives in the future and is there to serve communities and be ready to answer the call when they are needed.

“Having the next generation ready for fire service is critical and there is a huge benefit in promoting these programs,” added Quiros. “It also benefits the individuals involved. They’re building skills such as commitment, leadership, community and a spirit of volunteerism. These are all life skills they will use.”

Braaksma has seen the benefits of high school firefighting programs for both the students and the community.

“When I see these kids realize that they can make a difference, it’s the best part of my job. I’ve had students who rescued a man who fell in ice. They reacted quickly, pulled the man out of the water and took care of him until the paramedics arrived. Without their quick response and skills, the elderly gentleman might have died from hypothermia. That was a proud day for me.”

Braaksma also recalled another student who alerted restaurant guests and employees of a fire in the back of the building, and then helped everyone get out safely. “These kids are thinking ahead. They know what to do and are aware that they can take action to help people.”

Braaksma treats his students as though he is their fire chief and they are his firefighters. In addition to their three hours together in the mornings, several take his first responder and terror and homeland security classes in the afternoon.

He’s impressed by their dedication to learning about firefighting. “They remind me of when I was their age and what I was like back then. I had a bike, and wherever a fire engine was going, I would follow it,” remembered Braaksma. “These students are the same way.”