↓
Home→Pollution→Municipalities take back the night sky 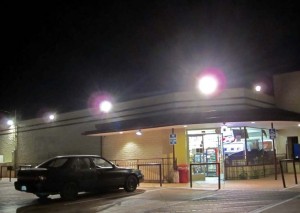 Unshielded lighting fixtures produce glare and result in lost energy. In particular, acorn and period-style fixtures are
commonly-used fixtures that are not dark-sky friendly. There are dark-sky friendly options available for municipalities
to use instead, including fully-shielded acorn and period-style fixtures, where the bulb is shielded in an opaque
top that sends light down. (Photo provided by International Dark-Sky Association)

The U.S. wastes approximately $2.2 billion per year on energy due to poorly-directed street lighting. Poor lighting decisions also contribute to light pollution, which can have adverse health affects on humans and animals among other problems.

The key solution to fixing this problem: use light more effectively with better planning, in addition to using lighting fixtures that shield the light source, minimizing glare and light trespass.

“IDA certifies fixtures as being dark-sky friendly, but basically any fixture that sends its light downward rather than up can meet the criteria,” said Scott Kardel, managing director of International Dark-Sky Association, a nonprofit group that raises awareness of light pollution. In the way of dark-sky friendly fixtures, Kardel noted, “The use of full-cutoff fixtures for streetlights is at an all-time high. There is a variety of factors behind that, including a raise of awareness from municipalities and manufacturers.”

Beyond installing more efficient fixtures, Kardel stated municipalities are also shutting down and removing lights. In most cases, they have found they don’t need them. Instead, cities are completing plans that only use what light they need.

“In most cases, resistance comes from people not wanting change and having a perception that ‘dark sky-friendly lighting’ might mean that the lights will be too dim and that safety and security might be compromised. It is simply a matter of overcoming inertia and seeing that there is a proper job of education that is done to show people that there is a better way to use lighting at night,” said Kardel. “In most cases, dark-sky friendly lighting saves energy, improves visibility, lessens light trespass—making it easier for some to sleep at night—and has less effect on wildlife, too.”

For light sources, Kardel stated LED is an option since it is superdirectional. American Green Technology also recommends induction noting induction lighting does not bounce upward like LED.

Induction lighting has its roots in the 19th century. Induction has an approximate life of 100,000 hours: twice as long as LED; five to 13 times longer than metal halide and high-pressure sodium lamps; and five to seven times longer than standard fluorescent. Induction’s simple design uses a frequency generator to energize an external magnetic field, exciting a gas-filled vacuum to create a luminous circuit, limiting points of failure.

“We started out with LED and moved away. Induction is half the cost and LED has so many failure points,” said Larry Seurynck, executive vice president of American Green Technology.

Seurynck noted LED runs hot with heat sink in high quality LED products being a major driver of cost since fixtures that can deal with the heat generated cost more. Rises in operating temperatures can reduce LED life by .5 percent, in addition to lowering light intensity and creating color shifts. Induction also produces a crisp white light that has a diffused beam, which spreads out evenly; Seurynck noted because of this a green car will look the same during the day as at night under induction lighting, which can be beneficial for security reasons.

Arkansas
Eureka Springs, Ark., enacted Ordinance No. 2114 to protect the city’s night sky and the safety of its residents and visitors. Approved Feb. 10, 2010, the ordinance regulates outdoor lighting on public and private property to help reduce energy waste and atmospheric light pollution, in addition to minimizing glare and over-lighting. The ordinance requires all light fixtures to be shielded and aimed downward toward the ground; lighting also cannot exceed 40,000 lumens. Those who violate the ordinance receive a warning and then a fine on subsequent offenses with violations being enforced by the building official and other officials designated by the city.

“We were thrilled when the city of Eureka Springs unanimously passed its lighting ordinance. We hope that Eureka Springs can become a model for the other communities around Arkansas,” said Jim Fisher, a volunteer with the Arkansas Chapter of the IDA. Started in 2008 the chapter is made up of volunteers in addition to Arkansas’ two largest astronomy clubs: Arkansas-Oklahoma Astronomical Society in Fort Smith, Ark., and Central Arkansas Astronomical Society in Little Rock.

Fisher stated they have been slow getting their message out to municipalities, focusing instead on passing statewide measure. “We are currently working with Arkansas Representative Stephen Meeks on a proposed statewide law that would be called the Arkansas Nighttime Environment Protection Act. It would replace the Arkansas Shielded Outdoor Lighting Act, which has little teeth and a very large loophole for municipalities that declare it would be a financial hardship for them to comply with the requirements.”

Rep. Meeks hopes to re-introduce the legislation in late-January during the new session of the Arkansas General Assembly, and Fisher is confident the assembly will pass meaningful legislation that addresses the serious problem of light pollution. “If it does not happen in the upcoming 2013 session, I foresee it happening in a future session,” Fisher said. “Our biggest problem in accomplishing this goal is educating the public and our lawmakers on the very real harm of light pollution—both to the nighttime environment and lost energy resources – and how easily it can be reversed.”

“After the legislative session, I intend to begin contacting the larger municipalities in Arkansas to promote that they adopt the model lighting ordinance. But I’m waiting until after the upcoming legislative session to begin this effort,” Fisher said.

Illinois
Homer Glen, Ill., is the fourth municipality in the world—the third in the U.S.—to be designated an International Dark-Sky Community, after undergoing a rigorous process that included a comprehensive lighting code, community commitment and broad support from community organizations, and having projects completed with success. The village’s ordinance originally passed Dec. 18, 2007, and was updated June 14, 2011. The ordinance requires downward shielding and full-cutoff lighting, in addition to regulating the amount of lumens any given luminaire can put out. Homer Glen’s Environment Committee based the ordinance on one used by Flagstaff, Ariz., the first International Dark-Sky Community.

Homer Glen Trustee at-large Margaret Sabo said, “There are many costs (to light pollution) besides money.” Sabo noted health issues in humans and animals are just some of the additional costs. The ecosystem in Homer Glen was also being impacted with prey animals no longer having protection. 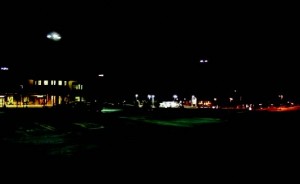 During the night, Silver Cross Hospital Annex’s full-cutoff lighting fixtures prevents light from going upward and from trespassing onto other properties. The orange skyglow in the background comes from Chicago, Ill. (Photo provided)

When Sabo first moved to Homer Glen, she could see the night sky with some sky-glow from Chicago, which is 40 miles to the north. However, as other municipalities popped up in the area, light pollution grew, leading Homer Glen to make a proactive decision. “The fixtures are simple and the idea is simple,” said Sabo, noting canopy lights, buildings and parking lot lights can all be done cost-effectively.

“The ordinance is a model. The principle is simple: put lights in where needed,” Sabo said, adding municipalities can be dark-sky friendly no matter if they are already built out, just beginning or developing.

“Evaluate what you presently have and how you can improve it,” Sabo said. She noted Homer Glen gets calls from all across the world regarding its ordinance and have shared their experiences with the callers. 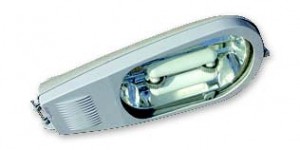 Induction lighting is an option available to municipalities considering dark-sky friendly lighting, due to its diffused beam that does not bounce. Pictured is an induction lamp housed in a full-cutoff streetlight fixture. (Photo provided by American Green Technology)

Elsewhere in Illinois, Cook County unanimously passed its first lighting ordinance nicknamed the “Starlight Ordinance” in February 2012 with Commissioner Larry Suffredin playing a leading role in getting it passed, according to Audrey Fischer with One Star at a Time. Chicago, considered among the worst light-polluted cities in the U.S., is also starting to look at light pollution.

“The biggest issue is that most people don’t realize that their starry night sky is missing. The others don’t realize that we can have streetlights and starlight, too, if we make the right choices. Everyone has an important role to restore starlight for today’s and future generations.”

Visit www.darksky.org to see resources and information from the International Dark-Sky Association about dark-sky friendly lighting fixtures and ordinances.