In 2008, Mayor Michael Nutter of Philadelphia, Pa., launched the Greenworks Philadelphia Initiative with the aim of making Philadelphia the greenest city in America. Since then, various green technologies have been added to accomplish that, in addition to raising public awareness of energy sources and sustainability.

In August of 2011, the Southeast Water Pollution Control Plant finished installation on a solar panel system for the city.

“Cities and municipalities all have to look at their carbon footprints, either by city charter, by regulations, or by public pressure and public perception. Solar is a great way to reduce a carbon footprint of a city, large or small,” said Tony Lumino, senior project development manager at Chevron Energy Solutions. 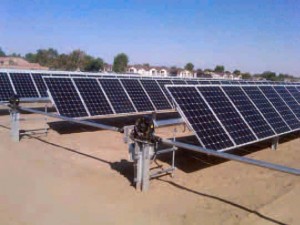 The cost of solar panels like these has dropped by nearly 20 percent over the past five years. Still, Tony Lumino, senior project development manager at Chevron Energy Solutions, suggests that cities study ways to be more energy efficient before putting in a system. (Photo provided.)

In Philadelphia’s case, the photovoltaic system brings the facility closer to the ultimate goal of net neutrality.

“The solar field helps the Philadelphia Water Department meet its department-specific energy goals and to contribute towards meeting the larger energy goals for the city of Philadelphia,” said Debjani Mallick, project engineer for the city. Lumino urges clients and municipalities to look into their own options before committing to a photovoltaic system.

“Before anyone looks at solar, they should look at energy efficiency, and they should look at other strategies to use less power before installing solar. Energy efficiency and other management strategies can provide better payback than solar,” he said. For municipalities who are considering creating a similar photovoltaic system, Lumino also offers a few other considerations, including how they’re going to manage the building project.

“My recommendation is, regardless of process, they should have a mandatory requirement of several years of experience in installing solar and should also ask for a performance guarantee,” Lumino said. “Solar is a sophisticated system installation and they need to find the right contracting partner. A lot of people think they can install solar, but they may not have the expertise. A city should not be a beta site for a contractor to learn how to install solar.”

The most important design consideration is location, he added, suggesting municipalities build near water pumps, wells or booster pumping stations.

“Those are water district infrastructure sites, which will always be part of the city’s utility. The property must also be available for use for the next 20 to 30 years since it will only be able to be used for solar energy capture.

Lumino also strongly recommends finding sites with higher than average utility rates. The high rates will help to fund the project and make it more financially viable. In Philadelphia’s case, expenses reached nearly $1.5 million. While the cost of parts has gone down greatly over the past few years, it’s still an expensive project.

“Besides the environmental benefits and the positive public perceptions, it all comes down to funding and the economics,” Lumino said.

Lumino labeled three funding options that cities can use to incorporate photovoltaic systems. The first option is to simply pay cash, ensuring that all revenues from the solar power generator return to the city funds where they came from. That’s a challenge in today’s market, however, where tax revenues are down and cities are struggling to meet long-term goals.

“Projects like solar are often not funded by capital improvement dollars because there are other, higher priorities,” he said.

Another option for funding such projects is third party financing. At the end of the payment term, the city would own the PV system and collect the revenues from it.

The third option is a power purchase agreement. Under a PPA, the city agrees to purchase power from a photovoltaic system over a typical 25-year period. For every watt of power, there is a predetermined purchase rate the city has to pay. A PPA investor owns and maintains the system with the city buying the power from them. The investor pays for the design and installation while the system is installed on city property. Through this option, the city receives less utility incentives.

Occasionally, grants are offered through various federal organizations. The U.S. Department of Energy’s Energy Efficiency and Conservation Block Grant supplied around $850,000 of the $1.5 million used to create the Philadelphia photovoltaic system, leaving the city to pay $650,000. It expects system costs and installation to be paid off within eight to 14 years, depending on the cost of electricity.

“The project is justified, economically speaking,” Mallick said. Although the system only supplies around 5 percent of the facility’s electrical load, in the past year the Philadelphia Water Department has discovered a savings of $30,000 annually and believes the savings will continue over the 25-year equipment life expectancy.