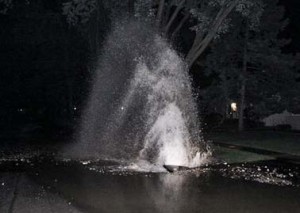 Water hammer is a common occurrence in water distribution systems and is sparked when fluid is forced to stop or change direction suddenly, such as when a valve closes or a hydrant opens abruptly. When combined with other factors such as weakened pipes, water hammer can result in costly repairs and bad press for municipalities.

Marla Braun, territory sales representative for JCM Industries, spoke at the 2012 APWA Chicago Metro Chapter Conference and Expo in May on the subject of municipalities assessing water hammer in their systems. 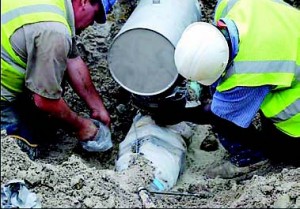 Cast iron pipes, which have a flake style molecular structure, spray much more when they break while ductile iron pipes break in blow holes. Breaks can occur without warning, resulting in possible overtime and holiday pay expenses for municipalities.

“If you can assess hammer in your system, you can reduce main breaks, which frees up funds,” Braun said, noting assessing and reducing water hammer also benefits residents, businesses and municipal services by lessening disturbances like flooded homes and surroundings.

When assessing water hammer, Braun said, “I encourage them (municipalities) to think about their breaks in a different way—to start thinking about each one and how they start.”

She stated municipalities should categorize their breaks into those they can live with and those they cannot, like those occurring in historical areas or in front of the mayor’s house. Braun is conservative with her estimates on breaks, stating most cost between $1,500 to $6,000 to correct. However, she noted, cost is effected by several factors, including the size of excavation, depth of cover and type of backfill, surface types, and topography. Municipalities also need to factor in the cost of treated water lost, possible overtime or holiday pay for employees to close off breaks as well as disruption and damages to other city services.

To assess potential water hammer, municipalities need to look at system data and troubled areas that have continually had breaks. While standing water is a sign of a break, it does not necessarily show where the break has occurred or the source of the trouble.

“Look at the municipal map and look at users and what could be going on in their buildings,” said Braun. “The high billers could be a contributing factor to the problems.” Braun described one municipality that had a water main break occur constantly, at a certain time, in an industrial area. The break, it turned out, was caused by a lawn care business filling their tanks every morning, suddenly opening and closing valves. The solution was the installation of a slow opening valve.

Sometimes the culprit is overlooked. Braun described a situation where every year, around Christmas, a municipality would have a break. The town manager stated it could not be the school since they were on winter break. However, after three Christmastime breaks in row, a closer look at system data showed pressure fluctuations. A boiler in the school proved to be the cause, which is why Braun stresses the need to look carefully at larger users in the system. Surge suppressors reduce pipeline damage and the associated affects of water hammer, pressure spikes and line content velocity changes. However, Braun noted there are other hammer mitigation devices available, including soft start pumps, variable frequency drives, elevated tanks, air release valves and surge anticipator valves.

“You can’t stop hammer but you can reduce its effect,” Braun said, adding not all breaks are the result of water hammer with corrosion and ground shifting being other likely culprits.

Union Grove averaged about 12 breaks a year, at most 28 breaks. “Every time we had a fire in the village or surrounding community our water department would get ready for a break,” Union Grove Public Works Director Mark Osmundsen said.

Osmundsen stated they discussed the issue with the fire department and convinced them to participate in a hydrant training session with a representative from Clow Valve Company, which produces hydrants and valves.“

As the older hydrants become worn, they have a chance of slamming shut when closed, especially if they are shut down too fast, Osmundsen explained. The newer hydrants, however, are tighter allowing them to work better than their predecessors, many of which were from the ‘30s. As Union Grove updated its hydrants, officials added the surge systems.

“We’ve seen a large decrease in water hammer breaks,” Osmundsen said, estimating the number has been reduced to about five breaks.

“I would have to say they work but the training of the fire personnel is also important.” Osmundsen stated as they see a need for new hydrants they will install suppressors at the same time.

“We add the surge at that same time then the only added cost is for the parts because you have the ground opened up already.” 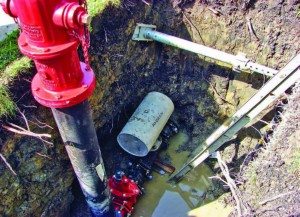 Arlington Heights normally averages 100 water main breaks a year, though it saw an increase to 300 in 2012, largely due to bad pipes and drought conditions that caused ground movement. However, in the past, water hammer has caused its own problems — particularly in a subdivision, where a water main ran through several back yards.

“We had to hand dig,” said Terry Botterman, water distribution foreman with Arlington Heights, noting it was due to several of the yards being fenced in. “We would dig six to seven feet deep. In a couple place, we had to move sheds — people didn’t realize they had a water main back there when they placed them.”

To lessen the problem, Botterman stated they selected a couple of subdivisions and installed new hydrants since many of theirs were from the ‘20s and ‘30s; surge suppressors were then placed in front of each of the hydrants. The decision saved money since they already had the ground open. It took roughly a year and a half a piece to complete two subdivisions while a later project in a cul-de-sac took only a summer.

“We haven’t had a hammer main break since we installed them six years ago,” Botterman said of the ones placed in the subdivisions. “In the six years, we only had one yard with a break and that was from ground movement.”

Currently, Arlington Heights has seven surge suppressors in a shop ready to go in the ground. The only reason they aren’t already down is because of all the breaks they have been experiencing. Botterman gets calls from people in California and other states about Arlington Heights’ experiences. “My suggestion is try one — pick an area and just try it.” He added, “We pick an area and paid attention to it for two years before we decided to go all in.”

Another aspect municipalities need to consider is the cost. Botterman said, “You’ve got to be able to afford them (surge suppressors).”