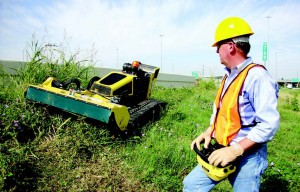 Steve Gerber, owner of Outdoor Concepts Inc., sells a lot of 725 Grasshopper front deck mowers to municipalities because of their versatility. Cities can use attachments to mow grass, plow snow, sweep streets and more. (Photo provided)

As soon as the weather is warm enough for grass to grow, public works employees stay busy keeping parks, medians and public land trimmed and tidy.

With all the ground they have to cover, choosing the right mowers is key to efficiency and productivity.

Scott Franks, sales manager with Outdoor Concepts Inc. in Bluffton, Ind., said they recommend Grasshopper and Gravely products for commercial use. “The biggest choice is whether you want a mower deck out in front of the machine or under the frame,” he said. “There are a lot of benefits for cities to have the front mower because they have a wide variety of functions that can be utilized on a year round basis instead of just the mowing capability.” 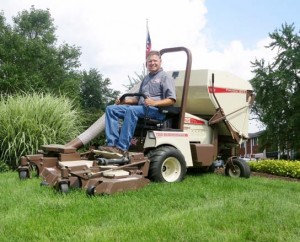 Alamo’s remote-controlled Traxx RF can cut down the danger, time and energy it takes to mow steeply-sloped, thickly-vegetated or swampy areas. (Photo provided)

The front mount’s versatility makes it ideal for the demands placed on a city. “The snow thrower is handy for snow removal, while the

rotary broom can be attached to sweep streets and sidewalks,” said Franks. “An aerator can also attach to the front mount to maintain turf on baseball fields as well. This way you have one basic power unit with a number of functions with different attachments.” 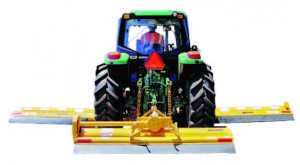 Flail mowers like this Interstater from Alamo Industrial Group make mowing jobs quick. But they’re also among the most safety-conscious type of industrial mowers because they throw out very little debris. (Photo provided)

Another popular feature for cities are fully-enclosed cabs that provide protection from the elements as well as heat and windshield wipers.

Safety should be the first thing that a city takes into consideration when it’s time to think about what mower to buy, said Ian Burden, president
of Alamo Industrial.

“You need to think about whether you’re going to be working around the public, or in areas where you don’t know what’s in the grass,” he pointed out.

Flail mowers, if they do come across a rock or other piece of debris, will usually pick it up, carry it around in the shaft and deposit it back into the ground — which makes them a good option for cutting grass around people, vehicles or homes.

Secondly, Burden said, think about what type of material needs to be cut and the frequency with which it will be cut. “A flail will take in heavy material, but they tend to go slower. If speed is an issue, something like a finishing mower would work better.” The size of the area, the size of the gearbox you’ll need and the name behind the mower should also be factors to consider in a purchasing decision, he added.

“Do you really want to buy a mower that’s difficult to get service on, or spare parts for? We encourage customers to think about the long-term use of the machine.”

“One of the most interesting is retention ponds. They’re normally wet and messy, have limited access and very steep banks. The bottom is swampy, so you’re going to get snakes and things in there. So municipalities are buying this product for maintaining them,” Burden said. The TRAXX RF is also a handy machine for mowing the steep slopes of dams and overpasses.

Although the mowing months aren’t here yet, Franks said that now is the time to prepare. “Whether you are buy new or repairing you current mowers, now is the ideal time to get ready for next season.”

Engines should be serviced, belt tensions checked, blades sharpened or replaced, and electrical functions should be tested now.

According to Ted Seil, motor pool supervisor for Wyoming, Mich., all 16 of their mowers have been thoroughly cleaned and winterized, and are now in storage. “During mowing season, each mower is on a regular maintenance schedule every 200 hours and has a seven-year life cycle,” he said.

Cities can sell or trade in their mowers and purchase new ones, which can be set up now for spring delivery. “Pre-season orders mean that we save money of freight by ordering the machines in bulk, which means that savings are passed on to the customer,” said Franks. “We can hold the machines until cities are ready for them so they don’t have to worry about storage.”