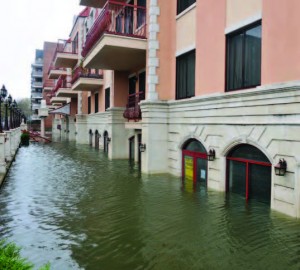 The Sheepshead Bay section of Brooklyn, N.Y., and many other cities in New York and New Jersey suffered billions of dollars in damage from Sandy’s direct hit. While residents of the region are famous for their resolve, many found themselves tested by the staggering extent of the flooding, wind damage and fire that resulted from the massive storm. (Anton Oparin / Shutterstock.com)

Arriving just in time for Halloween, “Frankenstorm” Sandy brought 70-90 mph winds, rain, sea swells and blizzard-like conditions to most of the eastern U.S. seaboard. The hurricane looks to have been one of the costliest natural disasters on record, with experts suggesting that the superstorm caused $20 billion in property damage and another $10-$30 billion in lost business.

As communities continue to clean up from Sandy’s wrath, municipalities are weighing in on the devastating hurricane and how it has impacted them.

Bronx resident Kathleen Graham said that while Hurricane Sandy didn’t bring with it the death toll of 9/11, it’s hard not to see the similarities.

“It’s close,” she said. “A lot more people were affected and there’s a lot more property damage in a number of areas. Some neighborhoods, like mine, lost power but are otherwise OK. Others look like a war zone.”

Sandy exercised her wrath throughout the Big Apple, tearing out the Boardwalk in the Rockaways, flooding the subway system in Lower Manhattan and closing Wall Street. She destroyed between 80 and 100 homes by fire in Queens and killed 41 people and created a desperate situation for 500,000 residents of Staten Island.

Con Edison utility crews worked around the clock for days to restore power to millions who were plunged into darkness. Mayor Michael Bloomberg’s office worked tirelessly with city personnel and federal agents in hopes of getting assistance to those who have been affected.

“I’ve been impressed by how quickly the mayor and the city were able to get the pumps running and get the subways and public transportation moving again. But other areas that have been slow to receive help,” said Graham.

“We are working with Governor Cuomo, other state elected officials, city officials, the Federal Emergency Management Agency and NYC Services to provide food and water to those most in need,” Bloomberg told the public shortly after the storm passed, noting that donations were pouring in via the Red Cross, Salvation Army and FEMA and the Mayor’s Fund.

A week later, just when it seemed that the city was making progress on the business of recovery, a Nor’easter blew through the devastated area — bringing another round of high winds, storm surges and snow that caused further damage to the city’s already weakened infrastructure.

“Thankfully, our recovery from this storm should be relatively swift, but we’re still left with the problem of recovering from Hurricane Sandy,” Bloomberg announced.

Despite warnings that a hurricane was targeting the East Coast with a vengeance, Mayor Duke Talbott of Elkins, W.Va., said there was no way to effectively prepare for the onslaught.

“We didn’t know if we would get rain or snow or some combination, so we tried to prepare for both.”

As it turned out, the city was blanketed with two to three feet of heavy, wet snow that brought the area to a standstill as trees and power lines fell. Talbott said he was proud of the way the city was able to keep the main roads open for emergency vehicles, and of the willingness of city employees like sanitation workers to re-train on the spot in order to augment the snow plow crews that were on the roads.

Residents who were without power and heat in their homes crowded into makeshift shelters in city schools, where food allocated for hot lunches was used to feed them. Talbott said although Sandy was the worst storm he could recall, he is pleased with the way the community pulled together.

“There was very little grumbling and everyone was very cooperative, but it will take until July of next year to completely clean up from it.”

Could have been worse

Harrisburg, Pa., is no stranger to strong storms either. After enduring the horrors of Hurricanes Irene and Lee, Mayor Linda Thompson said the community took the lessons learned and applied them — minimizing the damage left in Sandy’s wake.

“The other two hurricanes cost the city easily $20 million. We’re still cleaning up from them. But we are nowhere near that this time,” Thompson said. “Sandy will only cost the city about $2-$3 million.”

Thompson said that her city is beyond lucky that they didn’t sustain the level of damage incurred in New York, New Jersey or even Philadelphia. Residents were not evacuated as they had been in other storms, and they wisely stayed at home in order to keep the roads clear for emergency equipment and personnel. 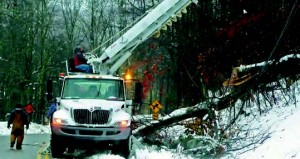 Sandy turned into an early-season snowstorm in Elkins, W.Va. In order to quickly remove the two to three feet of snow that fell, drivers from other departments pitched in to relieve plowers. (Photo provided)

High-speed winds knocked out the power for 48 hours and downed trees caused plenty of damage, but she said the clean-up efforts have been moving along smoothly. She credits the city’s willingness to learn from the past in order to bounce back from Sandy as quickly as possible.

“You never know what will happen with a hurricane. I can’t express how blessed we were that our lake didn’t rise or that the water being pumped out of New York and New Jersey didn’t flood us, creating a bigger problem,” she said. She also noted that Harrisburg officials studied the storm’s intentions, understood its potential impact and were able to mobilize personnel and equipment to get a jump on it.

“When I look at what my colleagues like Mayor Bloomberg, Governor Christie and Governor Cuomo have had to endure, I know we were very, very lucky.”