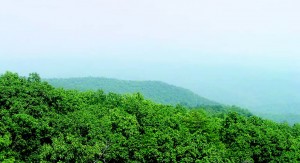 Great Smoky Mountains National Park, established in 1934, resides in Tennessee and North Carolina and is the most visited national park in the U.S. However, like many parks nationwide, it’s faced with challenges from invasive species and diseases to climate changes and pollution, in addition to budgetary and funding concerns. For these reasons, the Smokies have been listed on the National Parks Conservation Association’s 10 most endangered parks list predominantly for air quality concerns. However, work is being done on park, political, grassroots and local levels to insure the park is enjoyed for many more generations.

Like many parks nationwide, GRSM faces the challenge of invasive species and diseases, which affect biodiversity within the park.

“Wild hogs have been ongoing for a long time,” said Jeff Troutman, resource management and science division chief at GRSM, who also notes that the park utilizes an aggressive eradication program that includes a combination of trapping and shooting. “I don’t think we will ever get rid of the population completely but we can minimize their impact.”

The emerald ash borer made its appearance in the Smokies last year and is now in the park. Currently, park officials are monitoring to see what this invasive species’ impact will be. (Photo provided)

GRSM also monitors for disease with the most recent development being White Nose Syndrome in bats. The disease came from the north and has been discovered in one of the Smokies’ caves. To halt its spread, park staff has closed the cave. Park staff also has begun surveillance and monitoring in additional to educating the public of the disease. (Photo provided)

Besides hogs, the park’s three main concerns have been hemlock woolly adelgid, emerald ash borer and Thousand Cankers Disease. Strategic, integrated pest management has played a major role in keeping these invasive species and disease, among others, under control. The Smokies’ integrated pest management utilizes monitoring, which includes traps to detect the presence of an invasive species, chemical and physical controls, and biocontrol, which has seen success to some degree with the release of biological control insects to eat hemlock woolly adelgid in 2002. The park’s Vital Signs monitoring program is currently being redesigned to further increase response time to undesirable trends and new threats. Steps like creating public awareness and banning visitors from bringing firewood to the park have also slowed the spread of current threats to the park and curtailed future threats like the Asian Longhorned beetle from entering.

GRSM’s integrated pest management has resulted in saving over 200,000 hemlock trees to date in addition to preventing nearly 50 species of invasive plants from overtaking native habitats. Their hemlock woolly adelgid program has also created more awareness among the public of the threat imposed by invasive species. Federal, state and nonprofit neighbors have taken GRSM’s integrated pest management back with them to their respective jurisdictions. The park is also willing to train staff from other units and other land managers in their management techniques.

“We grab every piece of media, most predominantly the website and local newspapers pick up a lot,” said Troutman, who notes podcasts and onsite programs have also been helpful for educating the public.

Currently, the park is using surveillance and monitoring to remain alert for Chronic Wasting Disease, which affects deer and elk and has not entered the park yet.

As far as keeping invasive species and diseases under control, Troutman stated, “It takes a dedicated staff and a structured and systematic approach. It is an ongoing process. We get one under control and another one comes. We do make mistakes and learn from them and don’t do them again.”

“The elk have been very popular,” Troutman said, noting visitors love them though the elk aren’t always keen on the visitors.

While the park has had successes, they have also had learning experiences like when they tried to reintroduce the red wolf 10 to 20 years ago. “The habitat just wasn’t good for them. They didn’t make it in the park,” said Troutman.

Currently, Troutman states, no new reintroduction projects are in the works. However, down the road, the park may consider reintroducing the endangered red cockaded woodpecker if enough suitable habitat, which consists of yellow pine forests, can be maintained. “If we get enough yellow pine back, we might try to get the bird back,” said Troutman, who noted that steps are being taken to secure the park’s yellow pine through necessary controlled burning.

“Air quality has been an issue for a long time in the park,” said Troutman. However, through political, grassroots and local efforts, there has been relatively good success in reducing the trend.

Steps have been taken on a federal level to secure sulfur dioxide and nitrogen oxides emission reductions through programs. The Clean Air Act Amendments of 1990 and the NOx SIP Call have helped reduce NOx emissions from eastern power plants, introduce cleaner fuels and standards as well as cleaner diesel engines and fuel. Recent settlements with Tennessee Valley Authority and other power suppliers have also aided in the decrease of emissions with the installation of scrubbers; these scrubbers have reduced SO2 and sulfates, reducing haze, acid rain and particulate matter.

“We are excited by how much this will reduce emissions,” said Troutman of ongoing scrubber installations.

“For the future, we are always looking for ways to decrease emissions,” Troutman said. “Parks across the country are looking to do this.”

Along with monitoring air quality conditions within the park, GRSM has also begun researching the potential effects of climate change, using citizen scientists to monitor the phenology, or timing of natural events, such as leaves appearing and falling, migratory patterns of different species, or when the green up occurs. “It’s fun and informative for people,” he added.

While the park’s presence on the endangered parks list has not changed very many things on the park level, Troutman said it has increased awareness with the public. It may also bring donations to Friends of the Smokies, a nonprofit organization that raises funds for the park. “It increases awareness within the political crowd, who controls our budget — that is always a good thing.”

Despite the “endangered” label, Troutman’s optimistic, “We plan to be here for awhile.”